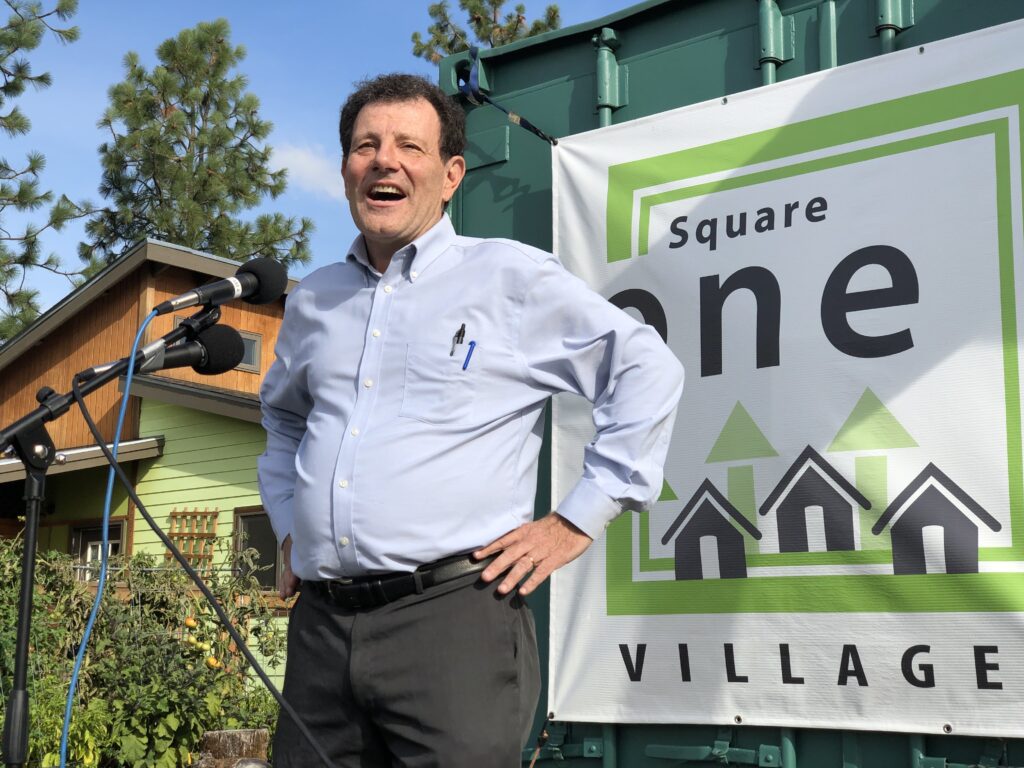 In Oregon, a Columnist Becomes a Candidate

(EUGENE, Ore.) — On Oct. 28, I joined other reporters at Emerald Village, an affordable housing community operated by non-profit SquareOne Villages, to await Nick Kristof.  The former New York Times columnist was fresh off his announced candidacy for Oregon governor just the night before in Portland.

Now, in Eugene, Kristof met with people transitioning from a life on the streets to ideally one with permanent housing and stability. We waited in the unusually bright and balmy afternoon weather, though fall typically sees the Oregon landscape lush with puddles, slugs, and mushrooms. My fellow journalists and I wondered if, given Mr. Kristof’s history as a reporter, he’d handle the press with any more openness and straight talk than your average politician.

The Times had just published Kristof’s poignant farewell to his readers that morning, as well as his job of 37 years, saying, “[I]t feels like the right moment to move from covering problems to trying to fix them.” We were about to see candidate Kristof in action now that his tour was finished.

First, Kristof needs to distinguish himself from an already-crowded field of gubernatorial hopefuls.  This may fall upon his continued ability to weave compelling narratives of hope and hold the powerful accountable, which earned him a devoted readership as a Times columnist. After he stepped down from his newspaper job, he also launched his own Substack column.

Then, it’s an issue of whether he can even legally run for Oregon governor.  In response to Willamette Weekly’s question about meeting the state’s three-year residency requirements for candidates, Kristof issued a 15-page document arguing that he meets those, despite his voting last year in New York elections and acknowledging he has a residence, a driver’s license, and children who attended schools in that state as well.

Kristof’s residential contacts with Oregon increased substantially in 2018 and 2019. He and his wife were physically present in Oregon with more frequency, and they made a significant investment to transition the Kristof family farm’s principal crop. They formalized their financial investment by forming a lease of the farm, establishing an Oregon limited liability company, and hiring a staff of three people to work the farm. They also filed an Oregon tax return in 2019 and Kristof registered to vote in Oregon in 2020. During this period, Kristof also continued to describe Yamhill and Oregon as his “home” in interviews, articles, and on social media. These facts establish both Kristof’s subjective intention and objective facts that he viewed and treated Oregon as his home.”

The Oregon Secretary of State’s office said that it won’t make a determination of  Kristof’s residency requirement as he’s not formally filed for office yet (the deadline is March 8, 2022). His campaign says he’ll file in the near future and noted that many presumptive rivals have also yet to file their paperwork.

A half-hour passed at the picnic table where we continued to wait for  Kristof, and our small scrum shifted from politics to streaming cable services and the latest Ducks game.  After a gentle squabble with his campaign staff about where I could plug in my recorder and set up my mic, a local TV news cameraman allowed me to duct tape my mic to his stand, more aesthetically pleasing than the overturned bucket I borrowed from a nearby garden shed. Then, after two successive two-minute warnings from his campaign staff, Kristof emerged, with his wife (and Times alum), Sheryl WuDunn. 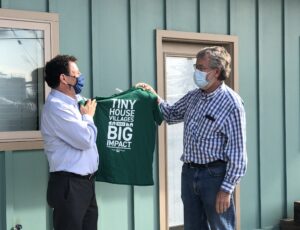 Then another pause. SquareOne Village’s executive director, Dan Bryant, presented Kristof with a t-shirt that said TINY HOUSE VILLAGES BUILD BIG IMPACT. The candidate said he was honored to receive the shirt and began his stump speech by citing his visit to Emerald Village as an example of “innovative ways that make a difference.”

He tied that further to Oregonians’ generosity and compassion for his father, an Armenian World War II refugee, who was given work, education, and opportunities after his arrival, Kristof added, before moving on to how many problems in Oregon are “a reflection of the political system’s failure” and that nothing will change “if we keep sending the same folks time after time to Salem [Oregon’s capital] and somehow expect different answers.”

Kristof then relayed themes shared in his premiere campaign video and farewell column. He focused on the “No. 6 school bus” story, how as children, he and his Yamhill classmates were full of hopes and dreams, but over time, more than a quarter had since died from addiction, alcoholism, and suicide.

After his five-minute speech, Kristof took reporters’ questions. “I am not a politician,” he replied. “I’ve never been a lobbyist. If anybody wants someone in that category, you’ve got other folks to choose from. But what I do bring is a career spent working with folks who’ve been elbowed aside by their governments all around the world and doing my utmost to better their life, taking on whoever stands in their way.”

He answered other questions, including further progress on reining in the COVID-19 pandemic, bridging the urban-rural divide, and tackling homelessness. Kristof highlighted his rural roots growing up in Yamhill and how that could help win support in the red communities in dominantly blue Oregon. In keeping with that background, Kristof said how he didn’t believe so much in a “silver bullet” approach to homelessness as much as a “silver buckshot” one, saying affordable housing, livable wages, and combating addiction were parts of the solution.

Each reporter was allowed to ask one question before Kristof left for another campaign event across town.

Our group of reporters seemed content with the exchange, though there were no residents or townsfolk present to ask their thoughts on the matter.  Candidate Kristof seemed well-poised and approachable as a blossoming politician, but Columnist Kristof still held the mic.

While passionate and able to refer to a lengthy career of amplifying the voices of the struggling and downtrodden, specific policies and strategies were lacking aside from lamenting the “political system’s failure to address fundamental problems Oregonians are facing.” Perhaps that’s further down the road as Kristof prepares to take on his rivals ahead of the Democratic primary in May 2022, which The Oregonian has called “the first competitive Democratic primary in more than a decade.”

That’s not just filler.  As of today, Oregon Public Broadcasting reports that Kristof’s campaign has raised more than a million dollars in contributions since Oct. 15, already more than twice the amount raised by two prominent Democratic rivals.  The Oregon Secretary of State’s office shows Oregon House Speaker Tina Kotek with $425,000 in contributions and State Treasurer Tobias Read with nearly $487,000.

Kristof’s war chest is also heavier than challengers outside his party; GOP candidates Bud Pierce and Stan Pulliam have $749,000 and  $512,000, respectively. Betsy Johnson, a Democratic state senator running as an Independent, received just under $66,000 to date.

Barring disqualification on the Oregon residency requirement, Kristof’s bid seems off to a meteoric start, sure to shake up the governor’s race in terms of profile and fundraising.

All that and a free t-shirt.