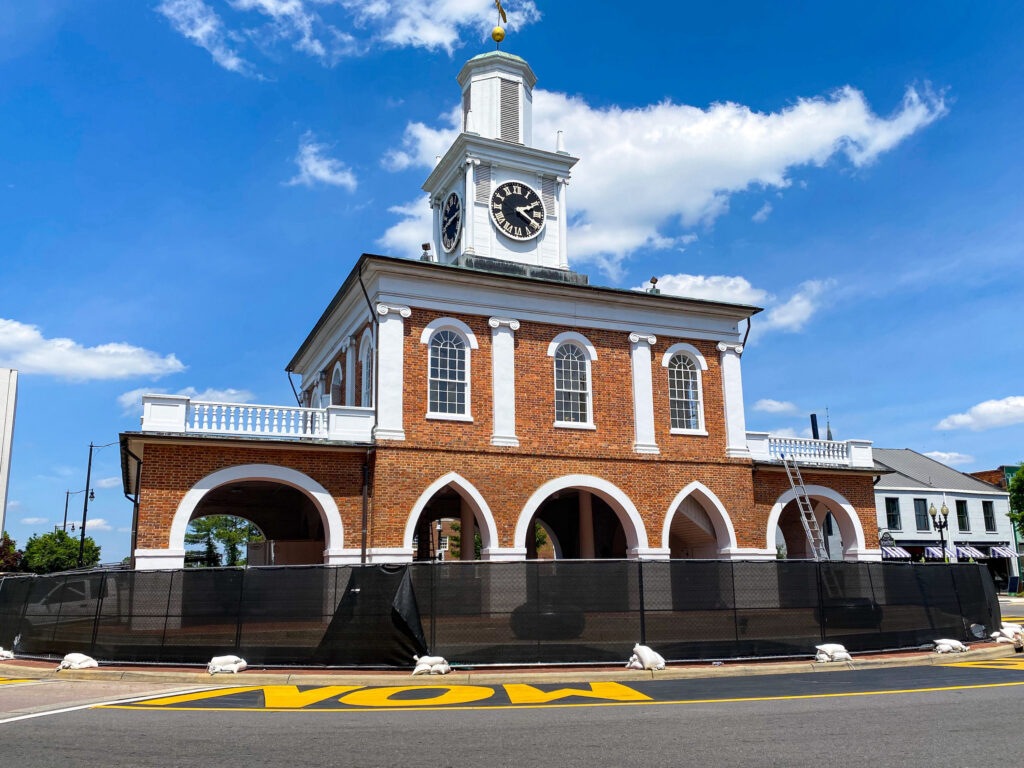 (FAYETTEVILLE, North Carolina) — Last May as the racial justice movement swept the country, Black Lives Matter protesters surrounded the historic Market House in this southern town. As an alarm rang loudly in the background, dark smoke wafted from the vandalized windows of the tall, aged brick structure.

The protest over the death of George Floyd in Minneapolis five days earlier began with a peaceful march down Skibo Road in the early afternoon and later gathered in downtown Fayetteville. The event took a quick turn as some protesters vandalized and set fire to the town’s well-known landmark.

Almost a year after the protests and fire, the Market House faces an uncertain fate with city officials and residents divided over what should happen to it.

Built in 1832, the Market House sits on a roundabout in a busy intersection in downtown Fayetteville. Standing in the heart of the city, the controversial building is a symbol of racial tension and civil unrest.  It was built to replace the old State House which burned down in 1831. According to historical accounts, the buildings were used for city affairs, and more nefarious business —the selling of slaves from 1796 until the abolishment of slavery in 1865.

Through the years, the building has faced scrutiny for its connection to slavery, and Fayetteville residents are divided over what should happen to the landmark that’s stood tall for nearly two centuries. Last June, two petitions were started on Change.org, one wanting to “preserve and protect” the landmark, and another to “knock down the slave Market House.” City Council meetings followed months later in August 2020 where many city residents pleaded to keep the Market House, wanting to maintain the building’s history.

“We believe the Fayetteville Market House is a significant reminder of the positive contributions of our community to the state of North Carolina and the United States of America and should be preserved on its present historical site at the center of our city as a reminder of the good and worthy foundations laid by our community for current and future generations,”  said Jackie Taylor, chairwoman of the Cumberland County Republican Party during a city council meeting on August 11.

Other residents feel that if city officials continue to stall on the decision of what exactly to do with the Market House, it should just be destroyed.

“If you’re not going to use it [Market House] at all and leave it here knowing slaves were sold here then, and if we’re not going to change it into something positive, then tear it down,” Adrian Burgos, owner of Prima Elements Holistic Wellness Center, told “The Click.”

“That building has always symbolized slavery, it has always symbolized oppression and bondage to me,” said Shaun McMillan, a Fayetteville community advocate and co-founder of P.A.C.T. (Police Accountability Community Taskforce). “I have absolutely no attachment to that building. If it were to be demolished tomorrow, I would be happy. I would rejoice along with the thousands of other African Americans who feel the same way about it.”

In January, the 10-member council, including the mayor, considered four options, from restoring it to tearing it down, and on April 12, the city council voted to repurpose the structure, with details to be worked out later, according to the Fayetteville Observer.

Whose History to Honor? 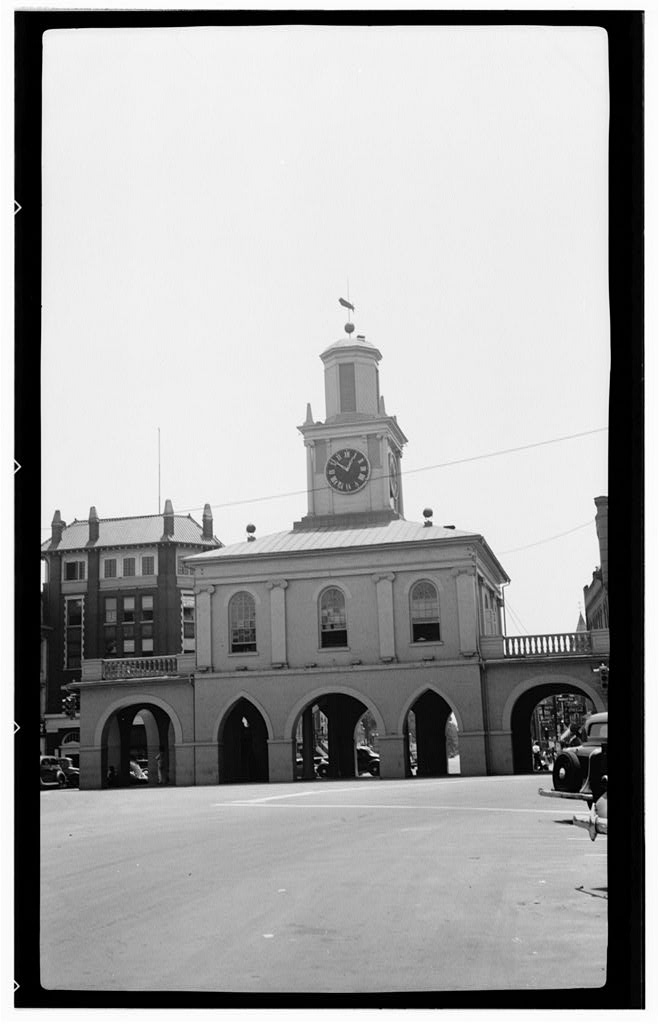 Photograph of Fayetteville Market House around 1933 [Credit: Library of Congress]

The Market House has served many purposes throughout the years, a town hall, a marketplace for the selling of goods such as tobacco and a tourist attraction in recent years. However, the most sinister piece of history is the selling of slaves at the Market House, and the Old State House that stood in its place before it.

It  was one of many historic monuments or Confederate structures vandalized or removed during the George Floyd protests. Approximately 170 Confederate landmarks and monuments have been removed nationwide since last April including 24 in North Carolina, according to the Southern Poverty Law Center.

Many of the structures that served as auction houses or marketplaces have been removed by cities wanting to burnish their images and distance themselves from their role in slavery, according to the  New York Times’ 1619 Project,  Some cities, however, have repurposed these structures.

Elsewhere in North Carolina, many cities have removed their Confederate monuments, acknowledging the harmful history they represent. But much like Fayetteville, many cities across the country continue to keep these structures up, posing as a landmark without any means of repurposing them. 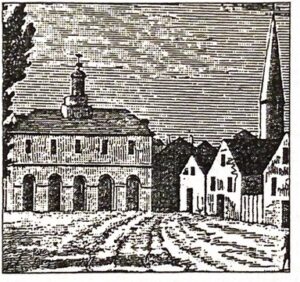 What is known about the Market House comes from Roy Parker Jr., a former reporter for the Fayetteville Observer, who credited Thomas Grimes, a brick mason and former slave as the builder for the Market House in 1832. Parker noted that the building style conformed with earlier work by Grimes.

In the book “The Market House of Fayetteville, North Carolina” authors Patricia Ann Leahy and Caron Lazar quote Captain Alexander Campbell, an 85-year-old Fayetteville resident in 1940 who said, “I have seen slaves sold at the Old Market House by auctioneers,” adding that his father A. M. Campbell was a city auctioneer who sold “eight or 10 slaves” from an estate in the early 1860s.

Nearly a year after the protests, its arches closed off by tall dark fencing, its windows on the second story still remain broken, and downtown is still recovering from the civil unrest.

In June, the city commissioned a mural in yellow letters saying “Black Lives Do Matter” and “End Racism Now” around the structure in solidarity with the protests. On January 11, the city removed the mural, which was meant to be temporary, without explanation. On February 3, after complaints from residents, the city allowed the messages to be repainted around the Market House once again.

Over the years, many residents have been vocal about preserving, restoring, or demolishing the landmark. In 2015,  shortly after nine Black members of a Charleston, South Carolina church were murdered by a white supremacist, the former president of the Fayetteville Area Minority Lawyers Association Allen Rogers wrote the city council asking that the Market House be removed from the city’s official logo.

“Given the mood in our country in the midst of this tragic incident in Charleston, Fayetteville needs to rebrand itself and remove the Market House from its official logo,” Rogers said according to the Fayetteville Observer.

The city council voted last year to remove the image from the city seal on Fayetteville’s flag, trash cans, and other places.

With the April decision to repurpose the landmark, the Market House still stands in limbo.

Five options for repurposing the structure were presented at the city council meeting in April; modification of the structure, turning into an art exhibit for the city, keeping it as a historic landmark that displays the city’s history, a marketplace for Black vendors, or turning it into an event space.

Given the controversy, many residents and business owners are reluctant to share their viewpoints and declined to speak with a reporter asking what should happen to the building.

Burgos, the owner of the wellness center who spoke to The Click, said he’d like to see the Market House turned into a farmers market for vendors and business owners in downtown Fayetteville.

McMillan says the controversy surrounding the Market House from residents should be channeled into much bigger problems in the community, such as the need for police reform.

“From the standpoint of an activist, I think there has been more attention placed on that structure and removing it,” he said. “There has been more attention placed on that than there has been on changing the policies that kill us and that put us in cages when we shouldn’t be.” Issues like what to do with the Market House “aren’t the issues that will touch us every day in our life, “ he said. “I want some of that energy from the powerful leaders in our community to go towards policy reform in a serious and meaningful way.”

Today, cars still bustle around the Market House. Noise from construction workers fixing the building can be heard over the commotion of the traffic circle. With the decision to repurpose the building without specific plans, the Market House awaits the next chapter in its near 200-years, perhaps something more beneficial to the residents of Fayetteville.