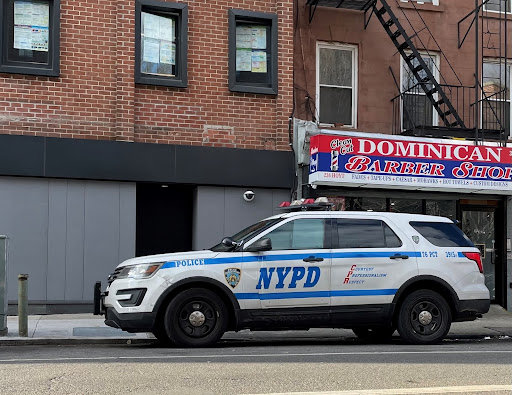 (NEW YORK) — Crime rates in New York City rose 38.5% in Jan. 2022 compared to Jan. 2021, according to the NYPD’s Statistics on Index Crimes. The increase continues the upward trend from 2021 during which crime in seven major felony offenses rose by more than 7.4% compared to 2020, according to figures from NYPD’s Compstat database.

City officials are meeting with federal officials, as both groups grapple with how to respond to a nationwide spike in violence. 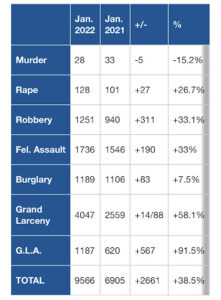 A table shows the increase in violent crimes in NYC between January 2021 and 2022. [Credit: www1.nyc.gov]

The January numbers come after New York endured a month of blistering national headlines for violent crimes. From the unsettling killing of Kristal Bayron-Nieves, the tragic subway incident with Michelle Go, to the two NYPD officers who were slain after responding to a report of domestic violence, the city’s first month of 2022 was scarred by public tragedy.

According to the data from the New York Police Department (NYPD), there were 100 shooting incidents reported last month, compared to 76 reported in January last year, a 31.6% increase. There was a 91.5 % increase in auto grand larceny, while hate crimes rose 72% year-over-year.

“The NYPD will forever work to ensure public safety and will never give up [on ]this city,” Police Commissioner Keechant Sewell said in a statement addressing the statistics.

While these trends are concerning, many criminologists are warning against pessimism.

“It’s important to know that this is not the worst it has ever been,” Crime analyst Jeff Asher said in an interview with the Brooklyn Eagle “while also understanding that it has gotten significantly worse in the past few years.”

The central tenet of Adam’s mayoral campaign was his ability to fight violent crime in New York. His administration believes that a coalitional effort with the national government plays directly into his strengths.

“The President is here because he knows what the people want. Justice, safety and prosperity” Adams said in the press conference.

“Mayor Adams, you and I agree,” Biden said while proposing Congress appropriate $200 million to invest in community violence prevention. “The answer is not to abandon our streets, the answer is to come together.”