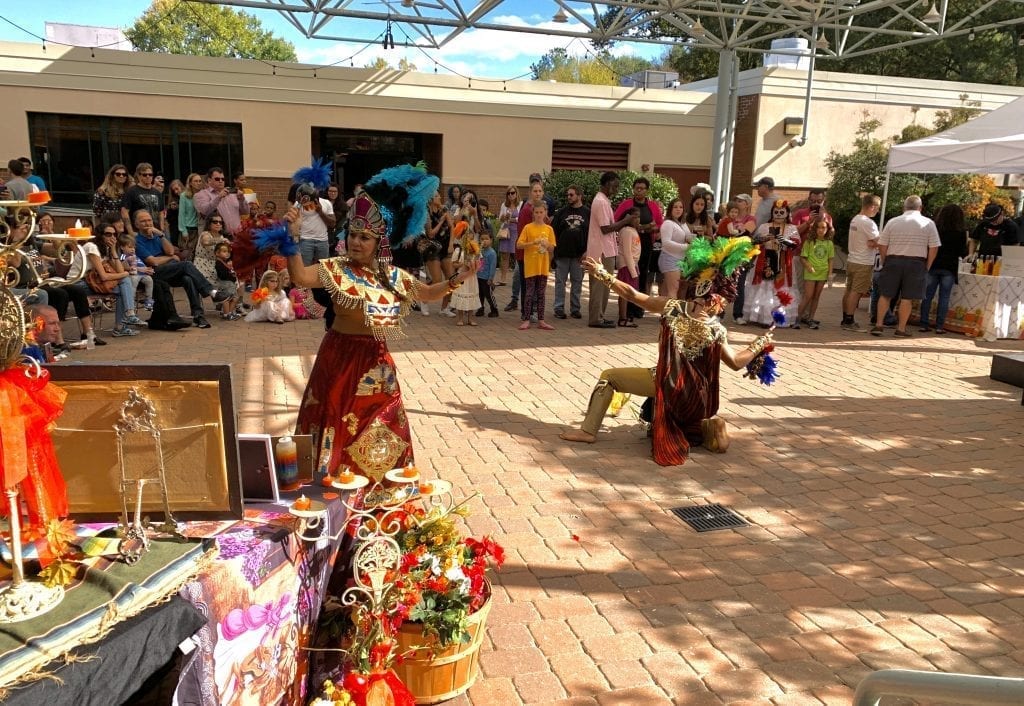 Latin Dancers Blend Aztec Tradition with Day of the Dead

RICHMOND, Va. — While the days surrounding Halloween are typically colored by secular traditions, for the religious, this season’s rituals are meant to honor and even beckon forth the spirits of the dead.

The Latin Ballet of Virginia took the stage on October 27 for a local Day of the Dead festival and attempted to reach out to the dearly departed. A pair of performers assumed the roles of ancient peoples in a heart-pounding Aztec ceremony—which left one dancer in tears.

“We were calling some spirits—but some good ones,” said Roberto Whitaker, a self-taught dancer who portrayed one of the Aztecs.

One of those “good spirits” was the late Ivana Lo Piccolo, a Latin Ballet dancer beloved by her peers who died of cancer two years ago. Her portrait stood at the center of the altar de muertos in the Glen Allen Cultural Arts Center’s sculpture garden, where unnamed photos of deceased family and friends were lovingly arranged.

“She didn’t speak any English—she was Italian,” said Whitaker. “But that language barrier was just broken through dance. We were able to interact… She was very in-tune with everybody, very open.”

The dance served as a formal opening rite to the Day of the Dead—or Día de los Muertos— activities, which included raucous piñata smashing activities and face painting. The Aztec ceremony, Whitaker says, was an allusion to the feathered serpent god Quetzalcoatl and the power of the sun. When he reached skyward and spread his arms, he said it represented “spiritual cleansing” and being “open and intuitive of the spirits that are coming down, as well as [from] beneath, to rise and be here with you on this plane.” As he beat the ground beneath him, he symbolically knocked on heaven’s door.

“In doing that [ceremony],” said Whitaker, “it’s only necessary to at least say a prayer and speak to them while we’re opening up. It’s not polite for us in that ceremony to not say anything to them when we just brought them over here.”

Near the end of the performance, Whitaker stopped and knelt at the altar. Overcome by the presence of those in the photos, he paused after the dance to weep behind a tree.

Along with his reflection on Piccolo’s life, Whitaker thought about his father’s death this year. But the Day of the Dead doesn’t employ spirits to spook or scare. Practitioners believe that the Mexican holiday is an opportunity to reunite with those in the afterlife, when the supernatural “veil is really thin,”Whitaker says.

Ana Ines King, the Colombian-born director and founder of the decades-old Latin Ballet, joined Whitaker in the Aztec ceremony. The theatrical element of the dance included full ceremonial garb, which she said isn’t like her typical performance outfits.

“I make a lot of costumes, but those are special—authentic from Mexico,” said King. “They know how to make them.”

Whitaker, who is of Puerto Rican descent, sees the ceremony as a continuation of a tradition passed down from the Aztec Empire to the indigenous Taíno and Arawak peoples, and finally to modern day Latinos in South and Central America. It’s a way for him and many others to reflect on the relationships with those who have died and, for ballet dancers, to express their emotions through movement and rhythm.