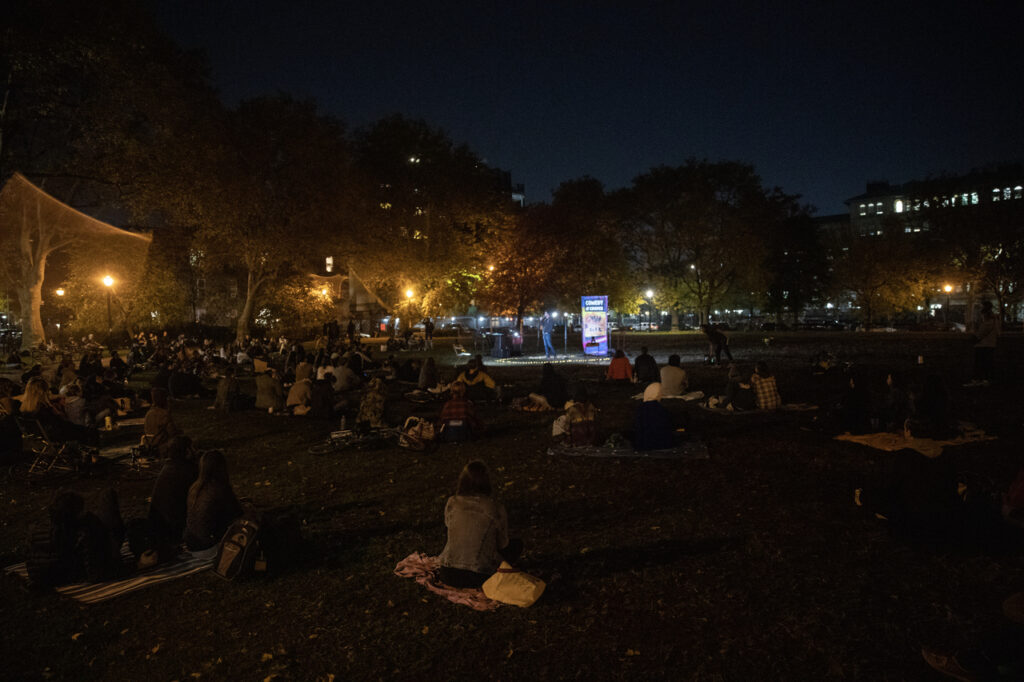 When the COVID-19 pandemic hit in March, social distancing guidelines made most comedic spaces impossible. Comedians adapted by moving their shows outdoors, rigging microphones, lights, and amps among the grass and trees.

An audience sits on the grass to enjoy a “Comedy at Cooper” show in November. [CREDIT: Photo by JT Anderson, courtesy of Nathan Habib.]

It was late summer 2020 and Nathan Habib was co-hosting an outdoor comedy show in East Williamsburg’s Cooper Park with fellow comedian Julio Diaz. Looking back, Habib admits he had no idea how the first show would go.

“I texted all of the comics like, ‘Hey, we’re going to try and do a comedy show at Cooper Park, it’s either going to be amazing or a complete disaster,’” Habib recalled.

The event wasn’t a complete disaster. As the show began, there was an audience of about 20 people. By the time it ended, close to 80 had wandered over to enjoy the socially-distanced comedy. Soon, Habib had created a community institution. “Comedy at Cooper” would go on to hold a weekly slot at the park. 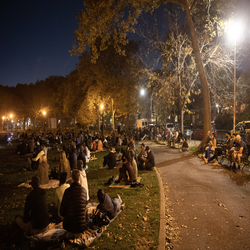 By November, Habib was switching things up, moving the event from its usual location in a grassy field to the basketball courts in hopes that the bleachers would be a more comfortable spot during the colder and wetter months. A DJ on the court played dancey beats as attendees in knee-length coats and snug hats filed in. Habib went around and passed out hand warmers. The audience bundled further inside their scarves and blankets to escape the icy air. Laughter, slightly muffled by the masks donning almost everyone’s faces, still managed to ring out across the breezy park. The old phrase “the show must go on” never felt more apt.

“The most special thing about it is that everyone who comes out [lives] in the area,” Habib said. “It’s been beautiful to see.”

In Williamsburg, comedy typically thrives in dark, enclosed spaces where audience members can shove together shoulder to shoulder, where ceilings are low, and where sticky, over-priced cocktails exchange hands. But when the COVID-19 pandemic hit in March, social distancing guidelines made most comedic spaces impossible. Comedians adapted by moving their shows outdoors, rigging microphones, lights, and amps among the grass and trees. It’s sad to think about how much I would pay now to sit in a sweaty room and watch someone nervously read a semi-decent set off of notecards. As a comedian myself, I used to be in those rooms, performing half-baked standup sets in the back of a bar, hosting variety shows on tiny stages for audiences of tipsy twenty-somethings, or sitting in the last row of a venue in a wobbly wooden chair, overwhelmed with excitement to see a comedian I loved.

Lately, traveling for a comedy show has become a thing of the past. But there’s no limit to the number of online platforms that have hosted comedians as the pandemic has worn on. From Zoom to Twitch to Facebook and Instagram, watching live comedy is as easy as turning on a phone or computer. But while comedy shows have been moved outdoors (or further indoors), many theatres and collectives with little business or government support continue to struggle, and outdoor shows will be less feasible during colder months.

Since 2018, the Brooklyn Comedy Collective has been working to produce diverse, joyful comedic theatre. Less than two years after its inception, the COVID-19 pandemic forced the collective to move online. Shows are often live-streamed on the TVCO app, where viewers can tip the cast during the performance. The group also offers a variety of virtual comedy classes.

Philip Markle, the artistic director and owner of the BCC, clearly has a lot on his plate. Luckily, there’s a community behind him helping to ensure things run smoothly.

“We’ve had to completely pivot to an entirely online operation, thanks to not just my efforts but hundreds of people that have put up shows, or signed up for classes, or teachers who have done online comedy classes that were actually good,” Markle said.

As they dealt with an online transition, the past six months led members of the collective to consider how they could further diversify their work. In June, the theatre’s diversity director, Arti Gollapudi, released a statement expressing solidarity with the Black Lives Matter movement. The shows for the remainder of that month showcased solely Black comedians.

Markle admits that the work has been taxing, but ultimately worth it.

“We pivoted very quickly and strongly and tried to meet the moment when it came to equity and racial justice and diversifying our theatre,” said Markle. “It’s been so emotionally draining, [but] I am so proud of the work that we’ve done.”

Turning the Lights Off

It was never surprising to see a business close in New York, with high rents and ever-changing social scenes. Unfortunately, COVID facilitated that process immensely. The Upright Citizens Brigade Theatre, famous for popularizing improvised comedy in NYC, closed their Hell’s Kitchen theatre and their training center in late April. By October, Dangerfields, founded in 1969, shut down. Soon after, in November, Long Island City comedy venue The Creek and the Cave turned off its lights.

Williamsburg has witnessed the same closures. Vital Joint, a lively, intimate space, home to theatre, science, music, comedy, and more, closed in August. The venue was overseen by experimental theatre company Title:Point. The dedicated artist behind all of this madness was Theresa Buchheister, founder and artistic director. Buchheister also became the artistic director of The Brick, another innovative Brooklyn theatre space, this past January, just months before the COVID-19 pandemic would bring business to a halt.

“I never anticipated this,” said Buchheister. “I’ve been in New York for just over 16 years, so I’ve seen places close that I love… That’s not a surprise. Real estate is really messed up here. The city, while it thrives on the existence of nightlife, does not really care to support it.”

Not that Buchheister would necessarily call what was happening at Vital Joint “nightlife”—not in the typical sense, anyway. A couple of events could maybe qualify, but most of the programming served a more niche community of artists unable to find another space to perform. With no additional expenses relating to shows, Vital Joint’s only priority once the pandemic began was paying rent.

“You can really get down to bare bones pretty quickly,” Buchheister said. “But if rent is not forgiven, then essentially you’re screwed.”

Robert Nelson, a Brooklyn-based writer and comedian, attended his first open mic in New York at Vital Joint. He remembers the venue and the people there as being kind, accepting, and generous with laughter.

“I always appreciate any underground comedy space,” Nelson said. “I still have [Vital Joint] saved on my Google Maps, and whenever I walk by I smile.”

Comedic Space and the Months Ahead

With true normalcy still a distant reality and hard winter months ahead, it’s tough to guess what comedy in Williamsburg might look like even a few weeks from now, nevermind months. Although they’re currently on hiatus to wait out the frigid New York winter, Habib insists that “Comedy at Cooper” will be back soon, and better than ever.

“We plan on making a super-strong comeback once the weather starts to get nice again,” Habib said. “I actually think this hiatus will help us long term. It will allow us to really reflect on how special the last 15 to 20 weeks were.”

The Brooklyn Comedy Collective is taking things day by day.

“My focus is on the BCC as an online entity for the foreseeable future surviving,” said Markle. “I’m not interested in doing indoor shows or classes until it is truly, not only safe safe, but emotionally safe. I don’t think people can enjoy themselves unless there’s no fear. Comedy doesn’t work in a fearful room.”

The spaces where you would go to relax, to see friends, to laugh—these comedic spaces still exist, but they’re different now. For Buchheister, it’s important to remember that it was never really the physical location that was special, but rather who was inhabiting it.

“If the thing that you really care about is what is happening inside of [the space],” she said, “then you can transition, with the pain that comes from things ending, and be like, ‘These walls don’t contain me.’” 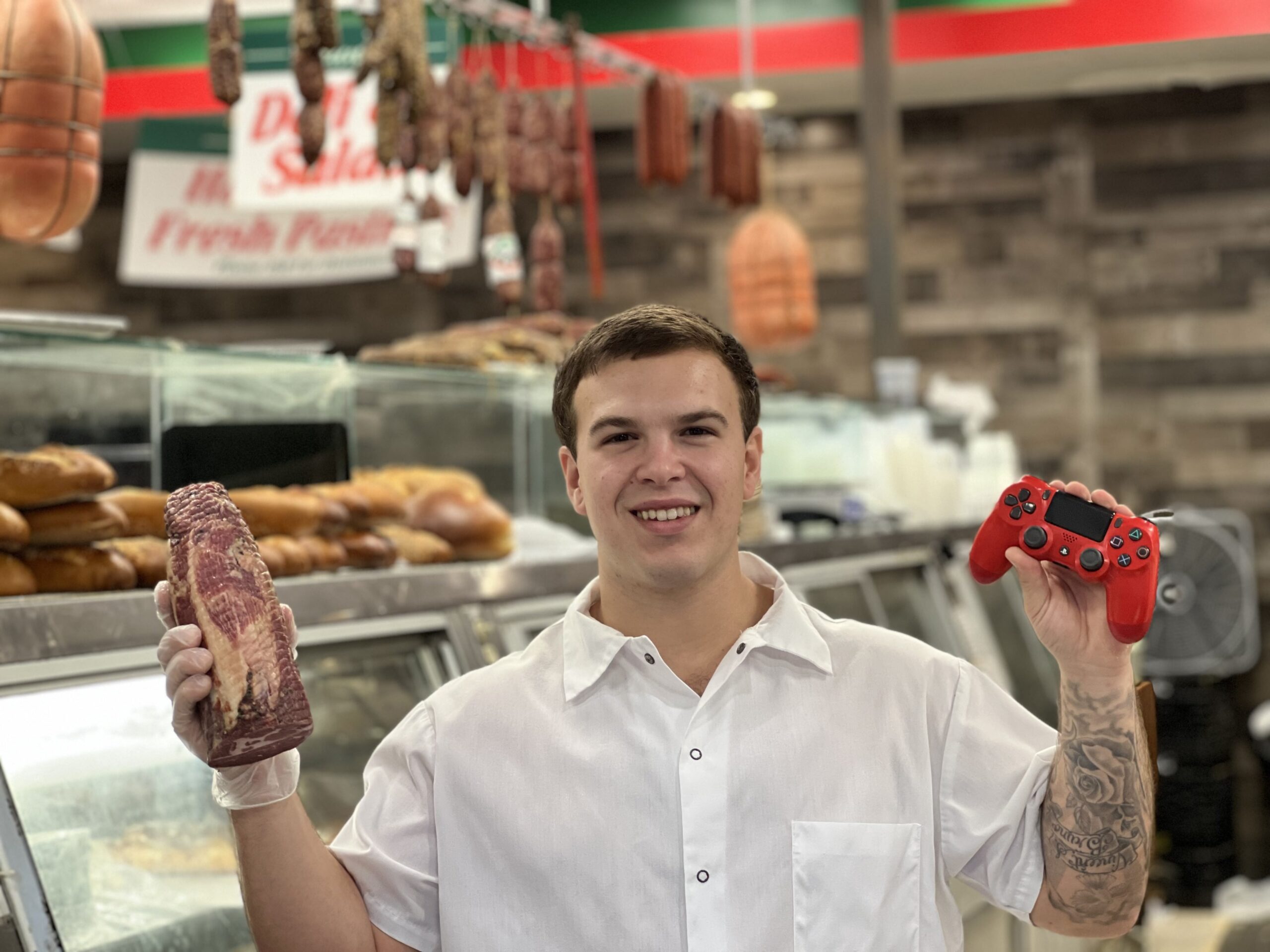 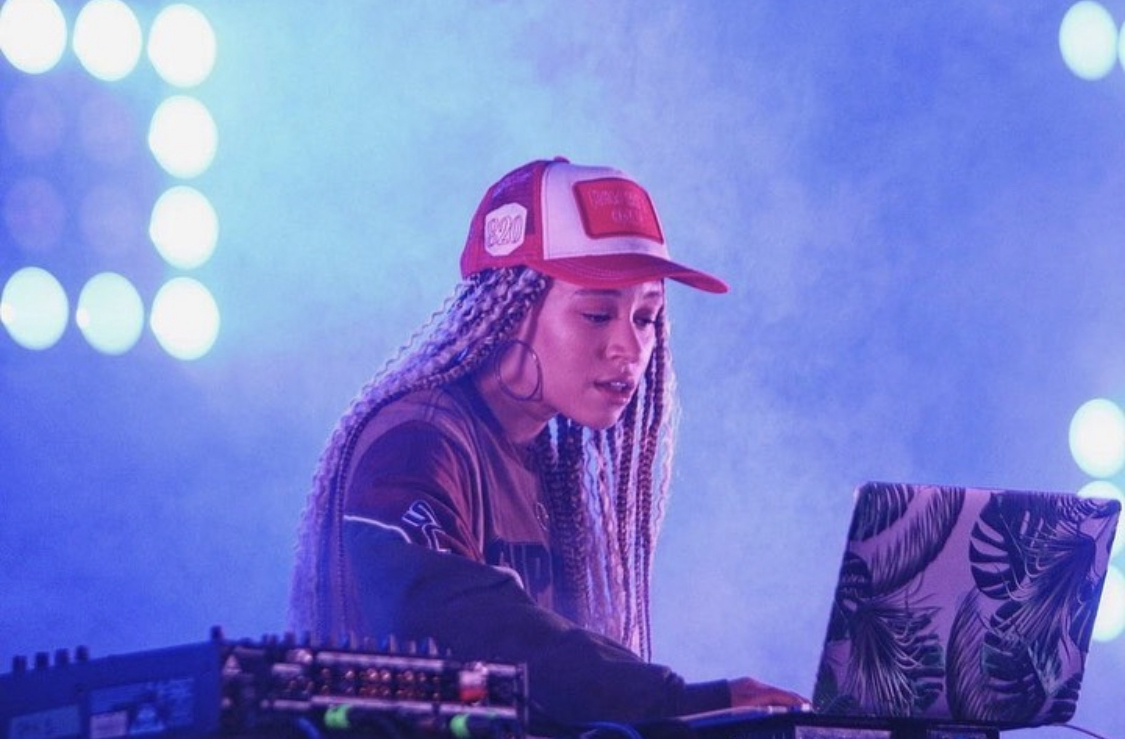