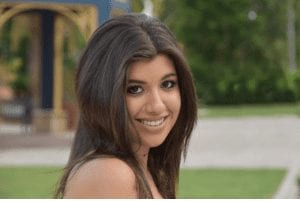 Lauren Gadol grew up as an only child in Philadelphia, Pennsylvania, and while she only 22, her aspirations far exceed her age.

Gadol attended Florida Atlantic University in Boca, Florida, where she was admitted to the communications program as a freshman. Not long thereafter, however, Gadol began asking herself the question many college students find themselves asking, “What am I doing here?” She knew, definitively, that she didn’t want to do what all of the rest of her friends were doing. Ultimately, she saw herself on E! News, or Good Morning America, and knew that communications was not going to get her there. Instead, she began studying multimedia journalism and graduated from Florida Atlantic in August.

Fast forward just a month, and Gadol is already en route to achieving her Master’s Degree in American Journalism from New York University.  She is already looking even further into the future as she prepares to take the LSAT, the entrance exam for law school.  Asked why she wants to pursue a law degree, on top of a master’s in journalism, Gadol says, “It could be fun.”

Eventually, Gadol would like to be creative director behind a “Humans of NY”-esque docuseries profiling individuals under the age of 25, shedding light on their journeys and struggles within the music industry, and providing them with a voice and a platform to showcase their talent.

Even this isn’t exactly what Gadol would call her end goal.

“If I could choose to leave behind something great? I would like to use an eventual platform to help the homeless,” she says.

With her sights set on a master’s in journalism and a law degree, and a desire to help her community, Lauren is on her way to that something great.