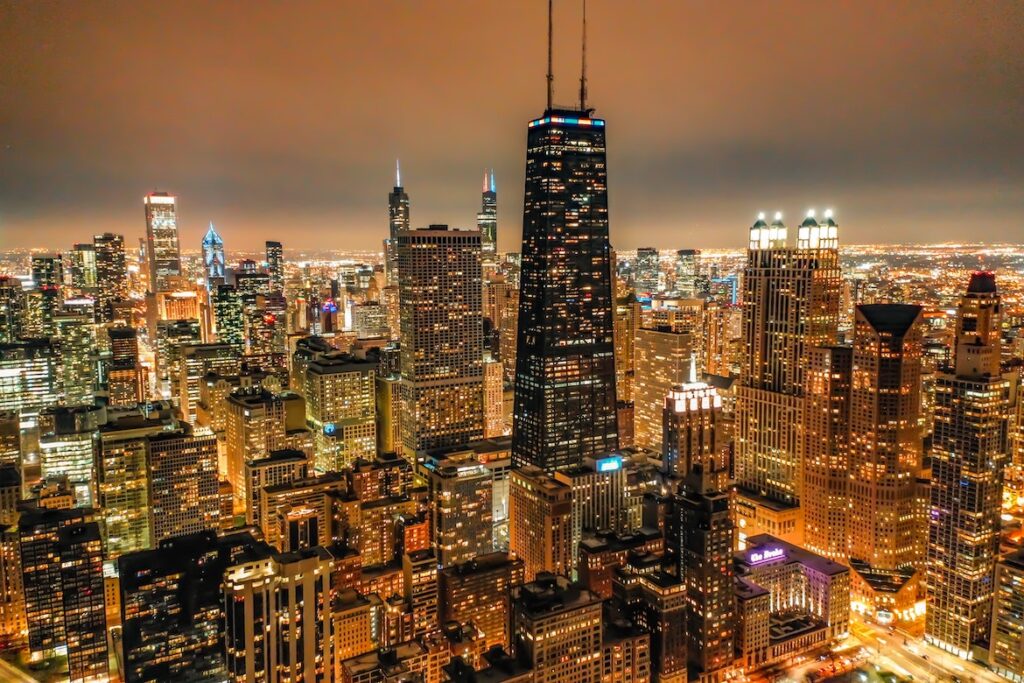 (LOS ANGELES) — Chicagoans feel a deep pride for their city, one that runs mightily through their winter-thickened veins.

Chicago, depending on the forecast, can truly take your breath away with its unique architecture, cuisine, and charming hospitality, known as “Midwest nice.” It was voted the best big city in the U.S. for the fifth year in a row in 2019 by Condè Nast Traveler and landed at number 13 on a list of 100 of the best cities worldwide by Resonance Consultancy, a ​​British Columbia-based global consultancy firm.

“If you talk to any Chicagoan, we’re all quick to let you know it’s one of the most beautiful cities in the world,” 32-year-old Dexter Angion said. Angion is a Black resident born and raised in the Roseland community. “It’s one of the best places to call home.”

In fact, 2.69 million people call it home, with millions more in the surrounding suburbs. More than 35 different ethnic groups are divided into 50 different wards, 77 different communities, and hundreds of neighborhoods. The city government does not divide neighborhoods for any official purposes, yet each one has its own culture and identity.

Among the 500 largest U.S. cities, 56 have large life expectancy gaps between neighborhoods. The divergence ranges from 20 to 30 years, according to a 2019 analysis from ​​the Department of Population Health at New York University’s School of Medicine. These disparities were most often found in cities with higher levels of racial and ethnic segregation. Chicago is one of the most segregated cities in the United States and lays claim to the largest of these gaps at a stunning 30.1 years between Englewood and the Gold Coast.

So why, in the same city, do people in one neighborhood live 30 years longer than those in another?

The corner of 63rd and Halsted

As the school year starts, children living in Englewood fill their backpacks with pencils, binders, and books. The bags weigh more than the kids themselves. They leave their homes hoping to see friends from years before, but the city has shut down four schools due to budget concerns — sending some children to new ones in unfamiliar areas.

The neighborhood sits eight miles south of State Street and Madison Avenue, the center point of Chicago’s cardinal directions. And as the summer begins, children play behind the chain-link fences of their red-brick three flats and the light-green cottage homes. Parents poke their heads out of the front screen security door to make sure their kids are safe while the sunshine lasts. When Chicago’s harsh winter hits, only those who must venture outside do so. It’s not unusual to hear groans of frustration as people trek through cold, wet snow to stand under an unheated bus stop awning.

For every 100 houses in Englewood, 35 lay empty. Plywood nailed over the windows and doors keeps squatters from entering. Access to grocery stores and fresh produce is limited. The local Whole Foods, an oasis of healthy options, opened in 2016, but it announced its closure just six years later, in April 2022.

“There’s nothing but Popeyes, McDonald’s, and Wendy’s,” Lashay Shambley told the Chicago Sun-Times. “I kind of looked toward Whole Foods for a healthy escape.”

More than half of Englewood’s residents are on food stamps and almost half of the 26,000 residents in Englewood live in poverty, according to the University of Chicago Medicine’s Community Health Needs Assessment. The household median income is $22,000, less than half of the average Chicago household. The top cause of death is heart disease, followed by cancer, then injury. The average lifespan is 60 years of age. Meanwhile, the lifespan for the average American is 77 years old.

While there are nine different health centers in Englewood, represented in the 2019 community profile by the University of Chicago, the only emergency room is at St. Bernard Hospital on 64th St. The hospital is a necessity, but the community hasn’t embraced it.

“It’s notoriously one of the worst hospitals on the south side,” Angion said, who spent a lot of time at his grandmother’s in Englewood. “People with gunshot wounds would wait for hours in St. Bernard,” he continued.

Police presence is high in Englewood. Both violent and property crimes traditionally run high in the neighborhood and both rose in the last four years, according to data from the Chicago Police Department. For a neighborhood severely plagued by gun violence, the closest — and only — trauma center in the area is on the east side of the I-94 Expressway at the University of Chicago.

From rags to riches

The mixture of million-dollar mansions, row houses, and high-rise apartments line Jean-Baptiste Pointe DuSable Lake Shore Drive. Waves from Lake Michigan, large enough to enjoy but too small to surf, collide with joggers along the Oak Street Beach pathway. The neighborhood’s brownstones tower over tarred streets, some of which have been cracked under a Range Rover or an Audi to reveal the brick roads from an older Chicago. The nightly walk home for many of the residents is illuminated by gas lamps. The orange and yellow colors flicker like the candles of a dimly lit bar and the occasional fog rolls in from the lake, like the puff of a cigarette.

Unlike their neighbors, the Near North Side has plenty of options for fresh produce. Jewel Osco, Potash Brothers, and a brand new Whole Foods Market — announced just days before the closure of the Englewood location — sit just blocks from each other.

The median household income is more than $105,000, $50,000 more than the median income of the city of Chicago as a whole. The average age of people with this median income as of 2019 is 34 years old. The Gold Coast has 12 Starbucks stores to grab your morning coffee 10 minutes apart from each other in the neighborhood. In Englewood, there is one Starbucks.

For most, the commute to work is only a few “L” train stops away on the red or brown lines to their offices in the Loop, with an easy stop on the way home at Gibson’s Steakhouse for a post-work cocktail and steak. Amenities are abundant in the Gold Coast and the Near North Side. Fresh produce, public transportation, and nightlife are within walking distance.

Chicago’s economy thrived after the Great Chicago Fire in 1871, including Englewood, known as “Junction Grove” at the time. The Union Stockyards, built in 1865, gave many German and Irish residents a steady income, which allowed them to invest in their community. And the Gold Coast, initially named Astor Street District after business magnate John Jacob Astor, was in its infancy. Wealthy Americans like Potter Palmer were influential in its development.

In Englewood, the Union Stockyards continued to employ thousands of workers from the area. The neighborhood was distinctly middle-class America. Generations of families bought and lived in the same houses for decades. Public transportation was close and fresh produce was bountiful, just steps away from one of the many community gardens.

But in 1948, when the Supreme Court struck down racial housing covenants in Shelley v. Kraemer, Englewood was one of the first neighborhoods to see white flight, according to Shermann ‘Dilla’ Thomas, a popular social media urban Chicago historian.

White residents left the community quickly because of the influx of Black Americans, and businesses like Sears, Roebuck, and Montgomery Ward vanished over time.

“Not just the businesses,” Thomas said, “but institutions as well. Chicago State University was formerly in Englewood. Now it’s on 95th Street. So those shifts and moves happened while the demographics of the neighborhood were shifting.”

Over time, the community lost the essentials that help residents live a long and healthy life. The investment into the community began to diminish with the white flight. Angion reminisced about stories his mother and grandmother told about how beautiful Englewood used to be “when it was a white neighborhood.” Thomas, who lost his mother at 58 years old and father at 60, remembers how he could walk to three Jewel Osco grocery stores. All three were gone by the time his parents passed.

“When one particular area overwhelmingly has low-income projects or buildings,” he said, “and doesn’t have single-family houses and a tax base, then everything else falls. So, I’m not going to build a grocery store or any kind of small business, because there’s no homeowners to support it.”

Meanwhile, the Gold Coast is thriving. The first Playboy mansion was built on the North State Parkway in the heart of the Gold Coast. The Pump Room welcomed celebrities every night, with names like Frank Sinatra, Marilyn Monroe, and Humphrey Bogart walking through the doors.

The two neighborhoods were completely different in demographics, investments, and income by the turn of the millennium.

As long as the waves from Lake Michigan continue to crash into the cement walls of the south side, the residents of Englewood will continue to fight for a better quality of life. Organizations such as RAGE, the Resident Association of Greater Englewood, emphasize community investment by building relationships with fellow residents, Englewood’s public officials, and business owners in the community.

And Teamwork Englewood, a nonprofit community-based organization formed in April 2003, aims to bring together neighborhood organizations and residents to create the New Communities Program Quality of Life Plan.

The people of Englewood love their community and, most importantly, they love their neighbors.

“Despite the many challenges, residents, leaders, and community organizations have ushered in the era of Englewood Rising,” said Sana Syed, the senior director of strategic initiatives at the Inner-City Muslim Action Network (IMAN). “It’s a coordinated, community-led effort lifting up and nurturing the beauty, spirit, and resilience of Englewood’s tight-knit community and engaged youth.”

On March 8, RAGE and IMAN helped create one of Englewood’s only fresh produce markets through their community project, Go Green on Racine. “Go Green embraces a holistic approach that aims to build resilient economic, social, and ecological ecosystems necessary to bridge the health and wealth gap for Englewood residents,” Syed said. Their goal with the market is not just to be a standalone grocery store in Englewood but also to work toward healthy outcomes, drive business improvement and growth, and build resilient food ecosystems.

Syed said limited access to fresh produce is a severe challenge in her community. Obesity, heart disease, and diabetes are a huge part of why life expectancies for Englewood residents are 30 years shorter than that of their downtown neighbors.

The generational loss brought on by systemic racism placed Englewood and its residents in a hole — one that’s not easy to escape. It may seem like the first step towards the solution is a long-term investment into the community, but for people like Thomas, who has seen the impact of what a decaying community looks like, the first step is much smaller than that.

“They have these think tanks, and nobody on the think tank lives in Englewood,” said Thomas. “They have these symposiums about how to shrink the wealth gap and the life expectancy gap, and no one there is affected,” he said. “Talk to the people that have been affected.”