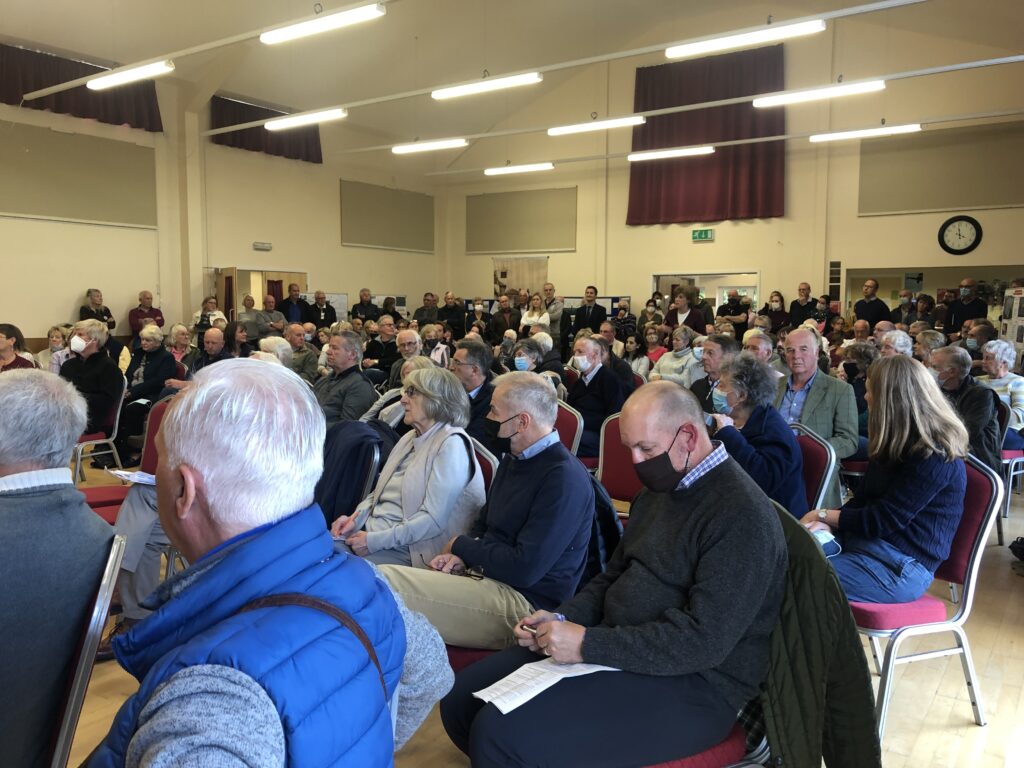 About 200 people, action group members, and concerned residents packed into The Beeches Community Centre for a meeting about Sunnica Energy Farm held by local M.P.s on October 15, 2021.

United Kingdom — In early 2018, residents in villages across West Suffolk in the East of England received a large envelope in the mail. “It looked like junk mail,” says resident Denis Field, and as a result, he says many people threw the packet away, not knowing what was inside.

Inside the white A5 envelope was information about a new 2,500-acre solar energy facility that a developer, Sunnica Limited, planned on installing in the area. A handful of villagers tell The Click they were not pleased to learn of the plan. Sunnica has not responded to repeated requests for comment on this article. 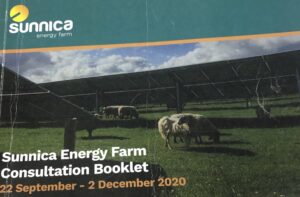 Sunnica Energy Farm Consultation Booklet depicts sheep grazing along a field of grass among an array of solar panels, sent to residents in Fall 2020.

A community-based action group called Say No to Sunnica, formed in 2018 as a response and has fought for three years to stop the construction of the utility-scale solar and battery farm called Sunnica Energy Farm, the largest utility-scale solar farm ever proposed in the U.K.

The action group aims to advise the public and residents about the campaign from the developer by frequently holding public meetings about the project and disseminating detailed information about the developer’s plans. Group leaders say they are concerned by the company’s intention to decommission a large amount of farmable land and implement potentially dangerous lithium-ion battery technology (BESS), all for unquantified and potentially minor carbon savings.

Say No to Sunnica Community Action Group is organized by a committee of ten people from the local area and has a mailing list of over 800 people and around 900 followers on their Facebook page.

Around July 2019, Say No to Sunnica signs started popping up outside residential homes throughout the villages of Worlington and Chippenham. Soon after, signs were put up in Snailwell, Fordham, and along the Soham Bypass towards Ely. 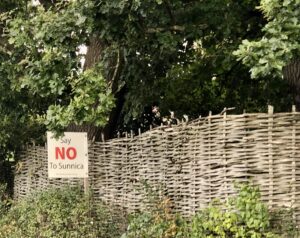 After understanding more about the proposal from Sunnica, villagers objected, but not because they do not believe in renewable energy, several tell The Click.

“I don’t think anybody in this room is against renewables or solar energy,” said Brian Harvey, the District Councilor for West Suffolk, at a Say No to Sunnica informational session earlier this fall.

“It’s the sheer scale and density [of the scheme],” he said.

The developer, Sunnica Limited, is a joint venture formed by Tribus Energy and P.S. Renewables, two private energy companies that are collaborating to develop the utility-scale energy facility.

Utility-scale energy facilities generate power for the grid system on a large scale. The companies invested in the project will get paid for the electricity produced.

The proposal consists of four separate solar sites that will connect through underground cables, reaching a gridpoint substation that the developer will construct 15 miles away in Burwell, allowing the energy facility to connect to the national grid. The project will cost millions of pounds and take at least two years to complete. 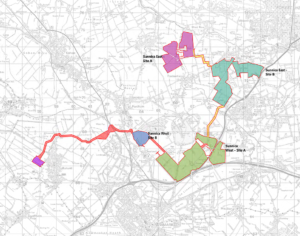 The Burwell substation is the small area of purple on the left; the orange and yellow lines are underground cabling.

Catherine Judkins, the chairperson for Say No to Sunnica, says the scheme will impact many people’s lives, not just those who live directly near the facility.

The East of England is known for open space and agriculture, with close to 4,000 acres of working farmland as of 2019. East Anglia is the primary region impacted by the project. It is rich with farms, walking trails, nature parks, and large countryside estates. Open space is also essential for horseback riders, which are very prevalent in this area because East Anglia is home to the town of Newmarket, world-famous for equestrian training and horse breeding.

The action group says Sunncia plans to lease sections of land from existing farms and private property owners who agree to participate in the scheme, but if the landowners do not consent, Sunnica will seek to acquire the land they need through compulsory purchase, which has led to widespread panic and stress among community members, says Judkins.

Joanna Reeks, whose family has owned and operated La Hogue Farm in the local area for decades, told reporter Dan Barker they planned on taking part in Sunnica’s proposal but withdrew in November 2020. When the family told Sunnica of their withdrawal, they said they would engage in a compulsory purchase of the land.

The action group says Sunnica has contacted at least 80 residents to express an interest in their property.

Nick Wright, a farmer and action group member, was contacted by Sunnica but declined their offer from the start. He has owned his farm in Badlingham for two decades and says the scheme will destroy invaluable land. As of June 2019, the agriculture industry in East Anglia alone had a total output of £3.4 billion.

Wright, who grows potatoes, onions, maize, and wheat says this project is a slap in the face to the local people and will have terrible consequences.

​​”There is no way the soil will be improved, stuck under a solar panel in a microclimate,” Wright says.

But Sunnica sees the project benefiting the world as a whole, according to its website.

“The overall impact of the scheme is beneficial due to the scheme providing low carbon solar energy to help the U.K. achieve its net-zero target,” it says.

However, members of the community and the action group say that is misleading.

“It’s just a way of making a lot of money out of trading electricity,” Wright says. “It has nothing to do with green [energy].”

Prime Minister Boris Johnson has said the U.K. will aim for 0 carbon emissions by 2050. A September report from The Guardian says the government will give out £265 million in subsidies to the renewable energy sector, £10 million designated for developers of onshore wind and solar farms.

Developers like Sunnica can take advantage of government subsidies that will guarantee them a set price for the energy they produce regardless of the fluctuation in the cost of electricity.

The implementation of Battery Energy Storage Systems or BESS, which enables energy from renewable sources to be stored and used at a later time, will allow the facility to store a massive amount of energy and provide opportunities to store, buy, and sell electricity from the grid whether that electricity is renewable or not, creating huge profits, according to Say No To Sunnica.

Energy trading is not the only concern that locals have about the batteries. The proposed project and the massive batteries will be located near farms, schools, and residential areas.

Sunnica Energy Farm will produce one of the world’s most extensive Battery Energy Storage Systems. The current largest BESS system in the world, Moss Landing Energy Storage Facility in Southern California, caught fire in September of 2021, causing vast plumes of toxic gas and an extensive amount of damage to the facility. Moss Landing has a capacity of 100MW compared to Sunnica’s proposed 500MW. The batteries would be installed across three out of the four sites Sunnica proposes.

According to a June 2021 study from scientists at Oxford, the Institute of Physics, and the University of Kent, the implementation of utility-scale lithium-ion battery energy storage systems, such as BESS, pose a high risk of danger.

Batteries can fail by thermal runaway or overheating a single faulty cell, igniting the entire battery.

The battery fires produce toxic gasses, potentially causing further explosions or fire. The scientists say that the chemical energy released can cause an explosion up to 20 times stronger than the amount of energy stored in the batteries.

The report highlights battery fires in utility-scale BESS worldwide, including in Arizona (2019), where an explosion caused by thermal runaway at a BESS site put eight firefighters and one police officer in the hospital, per P.V. Magazine. 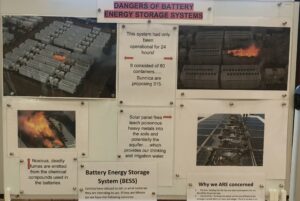 Say No to Sunnica informational posters about BESS at the Say No to Sunncia meeting in Freckenham on September 16, 2021.

What’s more, Say No to Sunnica says solar is inefficient on this scale in the U.K., claiming that on average, the U.K. has 1,600 sunlight hours per year, whereas other schemes of this size have only been built in areas with over 2,200 average sunlight hours annually.

Mark Nelson, an energy expert who has an MPhil in Nuclear Energy from Cambridge University and a degree in Mechanical and Aerospace Engineering from Oklahoma State University, agrees. He advises clients on the challenges associated with different energy choices, whether engineering or social.

He says a lot of the solar being built in the U.K. is not any greener than the clean energy systems that already exist, such as nuclear.

“Sunnica is a very poor use of land for how much carbon it will save. If the land weren’t already beloved and productive, and there weren’t better options for clean energy in Britain, this might be a different conversation,” Nelson says.

Community members’ outrage is getting the attention of local members of parliament. 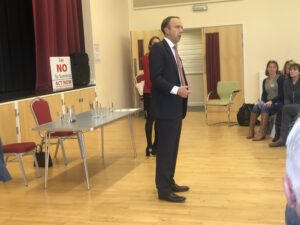 Hancock, who represents West Suffolk, says the company has failed to engage with community members.

“If you say you are in favor of consultation, come and meet the people,” he said.

Both Frazer and Hancock invited representatives from Sunnica to join the meeting on October 15, but Frazer says they refused.

Hancock says Sunnica not showing up to the meeting has changed his view of the project.

“If you’re a company that is proposing to do something that is the biggest of its kind in the country, and about 200 people come together with two M.P.s, including a senior member of the government…you should turn up,” Hancock continued, “How arrogant can a company be to come up with a project like this and not even turn up?”

The scale of the project is so large that it qualifies as an NSIP or Nationally Significant Infrastructure Project, allowing the developers to surpass the local government in the planning process and submit their plans directly to the Secretary of State, who will approve or disapprove through a 6 stage process called the development consent regime. 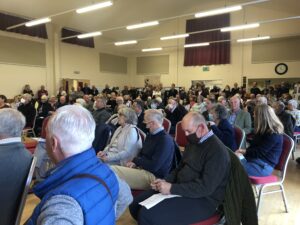 About 200 people, action group members, and concerned residents packed into The Beeches Community Centre for a meeting about Sunnica Energy Farm held by local M.P.s on October 15, 2021.

In late December, the Planning Inspectorate approved Sunnica’s application. Now the developers will move on to the third stage of the consent regime, pre-examination, which can take up to three months. Now is the time for residents to share their objections to the project by registering as an Interested Party by submitting Relevant Representation, a written statement of no more than 500 words, to the National Planning Inspectorate. All Interested Parties will be invited to participate in a Preliminary Meeting before moving on to the fourth stage.

Sunnica has not responded to repeated requests for comment both on October 20 and December 13 of this year.

Say No to Sunnica, its members, and people from the community like Nick Wright will not go down without a fight.

“They’re hoping that because it says renewable and solar on the box that no one will really look inside the box and it will just be rubber-stamped,” Wright says. “Well, they’ve got another thing coming.”