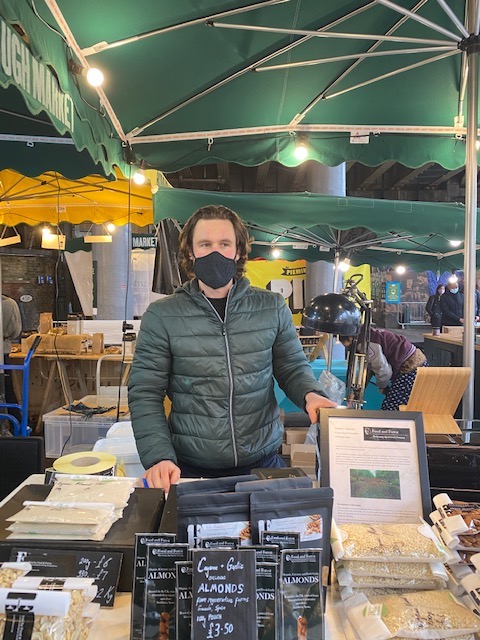 Meet the Philosopher Selling Produce at an Iconic London Market

(LONDON, U.K.) — A quick chat with Charles Tebbutt at his stall in London’s iconic Borough Food Market will leave you feeling like he is a thinker first, and a businessman second.

Tebbutt has been selling produce out of Food & Forest, his tiny corner of the sprawling market, since 2017. What distinguishes him from other sellers is his dedication to agroforestry, a more sustainable form of agriculture. Tebbutt noticed a lack of agroforest produce in the British market while he was pursuing his master’s degree in ecology at Cranfield University.

“I felt I should give it a go and try to fulfill that need by trying to establish an agroforest market and trying to develop the required machinery in the UK,” Tebbutt told  The Click.

Salted almonds and nuts accessorize his open-air green stall situated in a busy nook of the world-famous market.

However, he has been selling his goods in other markets during the weekdays as well. Tebbutt has seen his revenues take a hit due to the lockdown and social-distancing restrictions imposed in London because of the pandemic.

But despite the financial losses, Tebbutt sees the chaos created by the pandemic as an opportunity for the Borough Food Market to go back to its roots.

“Before the pandemic, the market was more of a destination for the day rather than a useful resource to provide people with what they need for their cupboard. Now, the business has become entirely dependent on local residents and has to feed what local residents want,” Tebbutt said.

The entrepreneur also thinks the pandemic has given his business fresh opportunities in the new normal.

“It’s a good thing to get embedded in the local community and get regular customers compared to tourists. You become less like a spectacle for tourists and where people come just to eat. It’s a great opportunity to recalibrate to become a produce shopping centre,” Tebbutt said.

An east-Lancashire native by birth, he originally came to London to pursue his degree in liberal arts at University College London.

“Without that background, I would be a worse human being, and I would not be effective in any of the things I do, really,” he said of his education.

From this education and his readings of writers such as Marilynne Robinson and Quentin Skinner, Tebbutt developed his unique business and political philosophies. He now believes in a message that  “even if an open democratic society were worse economically than an authoritarian one, it would still be worth it.”

In between his philosophical chats, though, Tebbutt is also quick to discuss his business’s practical problems. One of those is the difficulty he faces in sourcing compostable packaging.

“It’s a million-dollar problem to find a plastic alternative that is compostable,” he said. “It almost needs an Elon Musk type of figure who comes from outside the market and shakes it up.”

Tebbutt is not alone in his pursuit to use his business as a force for good and for questioning the tenets of capitalism. The notions of a better capitalism and just capitalism have been gaining ground recently in Western democracies. This school of thought treats businesses as custodians for harnessing social, political, economic, and climate justice in society.

When asked what advice he would give to new entrepreneurs looking to shake up the system, Tebbutt  said, “ask yourself what the most important and difficult thing you think needs addressing, and then try and address it.”

He also advises them to always remember their “why.”

“It’s like you come alive and a part of your soul is almost awakened when you are doing something. This is where you ought to be,” he said. “You get that feeling of being in the right place, of doing some really important work.”