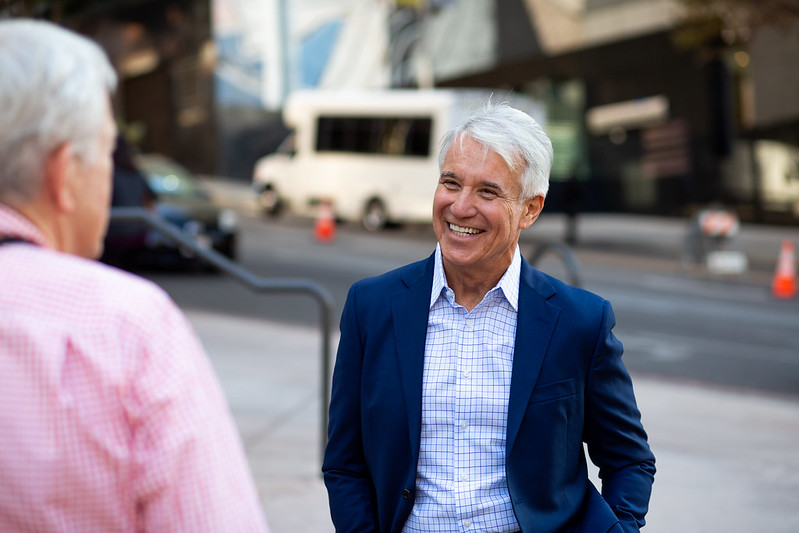 (LOS ANGELES) — In a contentious, top-dollar race, Democratic candidate and former San Francisco District Attorney George Gascón captured the coveted D.A. seat in Los Angeles County after his opponent, incumbent candidate Jackie Lacey, conceded on Friday morning during a press conference. There are 791,200 votes left to be counted, but Gascón currently has 53.72% of the vote, according to the Los Angeles County Registrar. Lacey’s consultants have advised that she will not be able to overcome the deficit. As of press time, 3 million Angelenos had voted on the race.

In a tearful speech, Lacey acknowledged her office’s accomplishments, as well as the consequences of a summer of racial reckoning. “The circumstances surrounding the death of George Floyd, Breonna Taylor, and Ahmaud Arbery gave breath to a conversation around racism, policing and criminal justice reform,” she told reporters. “It may be said one day that the results of this election is a result of our season of discontent and a demand to see a tsunami of change.”

“This is a grassroots movement to transform criminal justice in Los Angeles County,” said Gascón in a statement on Tuesday night. “This community’s overwhelming demand for justice, equity and change can not be ignored.”

Gascón’s win represents a major upheaval of power in Los Angeles, as veteran L.A. District Attorney Lacey failed to nab a third term after eight years on the job. The conclusion of the high-profile race between the two Democratic candidates spells a monumental victory for the historically blue county’s progressive voters and activist groups who support criminal justice reform. The L.A. chapter of Black Lives Matter has been hosting weekly protests denouncing Lacey over the last three years.

Gascón now has the opportunity to shape Los Angeles’ criminal justice policies for decades to come, with the potential to reduce incarceration rates, prosecute police involved in fatal shootings, and increase LAPD accountability on a large scale. According to a Sept. statement, Gascón has already announced he will re-open four officer-involved shootings that Lacey declined to prosecute.

This impact is in part due to the size of Los Angeles’ criminal justice system — the largest in the U.S., according to the Los Angeles Times. The prosecutor’s office houses nearly 1,000 attorneys who prosecute cases over a jurisdiction of 4,083 square miles and serve 10.2 million residents with the help of 800 support staff, according to the office’s website.

In line with past outcomes, 71.36% of the county’s 5.8 million registered voters cast ballots for Democratic Presidential candidate Joe Biden.

While both candidates grew up in Los Angeles, Gascón and Lacey represent diverging paths and ideologies.

George Gascón, 66, is the former District Attorney for the city and county of San Francisco, and former Assistant Chief of the Los Angeles Police Department. Originally from Cuba, Gascón and his family moved to Los Angeles in 1967. Gascón attended Cal State Long Beach, then worked as an LAPD patrol officer in Hollywood. In 2009, former San Francisco Mayor and current California Governor Gavin Newsom appointed Gascón San Francisco’s Chief of Police, and in 2011, he became the first Latino to hold the office of District Attorney in San Francisco.

According to his campaign page, Gascón ran on a number of progressive issues including holding law enforcement accountable and increasing LAPD transparency, offering mental and behavioral health solutions for L.A.’s homeless population, victim’s rights, and environmental justice. He opposes the death penalty, wants to keep people out of prison whenever possible, and supports clearing marijuana convictions.

According to a campaign statement, Gascón’s team contacted over 1.5 million unique L.A. voters, sent 1.6 million texts, and registered 1,900 volunteers over the course of their campaign.

A South Los Angeles native and graduate of the University of Southern California Law School, Lacey is known for her tough-on-crime stance, advocacy for mentally ill defendants, efforts to fight sex trafficking, and reforming the cash bail system. Lacey was also hailed for filing sexual assault charges in Los Angeles against the disgraced Harvey Weinstein.

Lacey went unopposed in her 2016 reelection campaign, but failed to secure enough primary votes to escape a runoff election in March of this year: she received 48% of the vote, while Gascón received 28%. Current L.A. Mayor Eric Garcetti had previously thrown his weight behind her 2020 reelection campaign; however, after George Floyd and Breonna Taylor were killed by police officers, putting national conversations on racism and criminal justice reform front and center, Garcetti switched his endorsement to Gascón.

The L.A. chapter of activist group Black Lives Matter, along with the Democratic Socialists of L.A., have long opposed Lacey’s policies, criticizing her decision to decline the prosecution of a handful of police officers who have killed civilians — mostly Black and Latino, according to the Los Angeles Times — and what they call her “racist” pursuit of the death penalty.

According to the Los Angeles Times, $19 million was poured into the race, with last-minute efforts from wealthy individuals in support of Gascón.

In total, the paper reports that Gascón raised $12.4 million, including funds from philanthropist George Soros, Netflix CEO Reed Hastings, and his wife Patty Quillin.  While 53% of his funding came from similar individual contributions from wealthy progressives, the group Color of Change contributed $3.4 million a few weeks before the election, helping to cement Gascón’s financial lead.

The Click spoke with voters as they were leaving the polls at Burton Chace Park in Marina del Rey. Because Los Angeles is a majority Democratic county and 3.1 million residents voted early or by mail, according to the L.A. County Registrar, voter turnout on Election Day appeared relatively low on the West Side. At several points throughout the day, the county’s polling place map reflected wait times of 15 minutes or less.

Voter responses regarding the district attorney race were not as polarizing as local media outlets or activist groups predicted.

“I voted for Gascón because he’s a Democrat, and I wanted to vote for a straight Democrat ticket,” Mike Parker, 24, said. As previously noted, Lacey is also a Democrat.

Another voter said that he voted for Gascon but “didn’t know too much about the district attorney.” He admitted having limited knowledge of Lacey.

“I made a very uneducated choice. I saw Garcetti was supporting the non-incumbent, so that’s who I went with to shake it up a little bit,” said Sam Weber, 30.

Nicole, who declined to give her last name, also voted for Gascón. “I’m disappointed in Jackie Lacey’s record for failure to prosecute police officers involved in violent incidents,” said the 60-year-old.

Nineteen year-old Chloe, who also declined to give her last name, decided to vote for Lacey. “She’s a feminist, and I appreciate all she has done for women,” she said.

For over three years on a weekly basis, Black Lives Matter protesters chanted, “Jackie Lacey must go.” Today, however reluctantly, she will go.