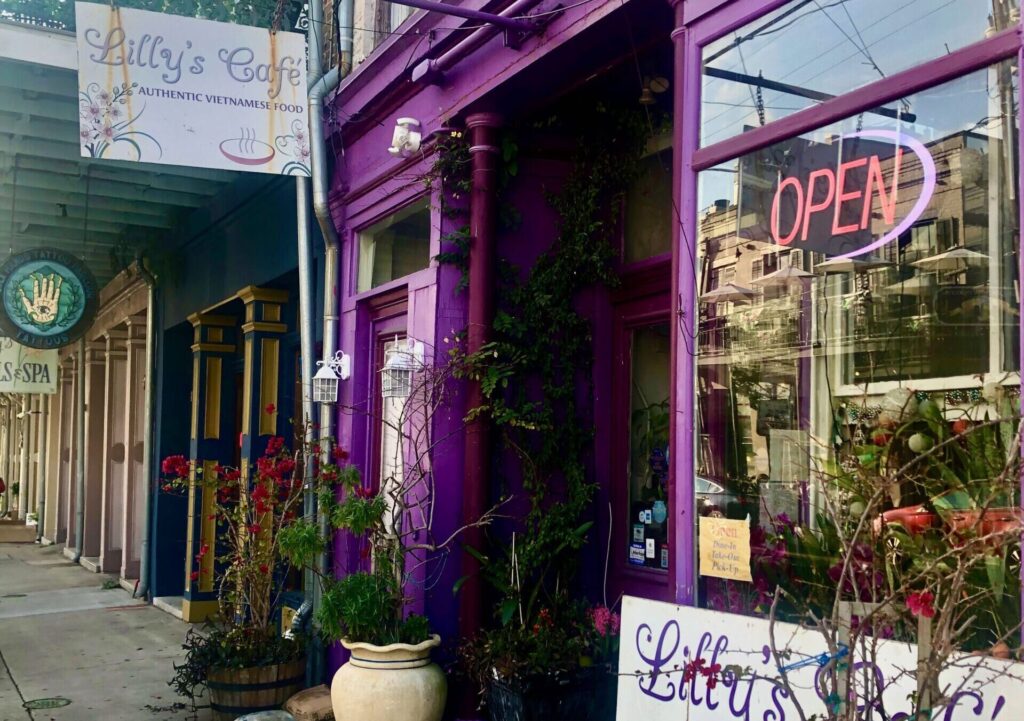 Trinh “Lilly” Vuong celebrated ten years in business with a successful Mardi Gras season, serving over 300 guests per day, only about 20 percent less than her typical numbers before the pandemic. [Credit: Tess Riley]

(NEW ORLEANS) – Carnival season may be over, but Trinh “Lilly” Vuong still has more to celebrate this year. Her family-run Vietnamese restaurant, Lilly’s Cafe, celebrated its ten year anniversary at its iconic Lower Garden District location last month, and plans to open a second location this fall.

After navigating two years of Covid-19 mandates and rising supply prices, Vuong is bringing her famous spicy tofu to the Uptown neighborhood. Vuong said she is grateful to her 70-percent local customer base and her family for carrying Lilly’s Cafe through the pandemic. All of her employees, which include her husband, younger brother, and mother, among others, worked to keep their doors open during a time that saw many longtime establishments permanently shutter.

“Without the family, I don’t think we could last this long,” Vuong said. “People come and go, but your family stays with you, and I’m so blessed to have my family.”

Ten years ago, Lilly’s Cafe was the first restaurant to open on a block of Magazine Street now known for its wide variety of culinary options. According to Vuong, this area was a different neighborhood when they first opened, with less foot traffic and fewer businesses.

“We were the pioneers,” Vuong said. “We’ve been recognized as part of the gem of the Lower Garden District.”

In July 2021, Vuong celebrated the restaurant’s upcoming anniversary with an interior remodel. Eater New Orleans recently named Lilly’s Cafe to their list of 38 essential restaurants, describing the new interior as “simple, clean, and inviting” while praising their pho broth for its ability to stand out in a city filled with authentic Vietnamese restaurants.

Lilly’s Cafe is regularly recognized by local publications like Gambit as a top spot for authentic Vietnamese food. This past fall, Vuong was given the opportunity to share her food and her family with a national audience after being featured in a video series by The Rachael Ray Show highlighting “the best neighborhood restaurants across the country,” as chosen by viewers.

“The rich pho broth simmered for eight hours imparts a decadence that puts it at the top of the city’s crowded pho list,” Eater New Orleans said.

According to the 2020 census, the current Vietnamese population of New Orleans and the surrounding area stands at about 15,000 due to an influx of refugees in the 1970s that have contributed to the cultural and culinary landscape of the city, including over a dozen traditional Vietnamese restaurants.

Lilly’s Cafe is able to compete in this landscape in part due to its devoted local customers. Many dined at Lilly’s with their families as children and now return as young adults to share the cafe’s cuisine with their friends, according to Vuong.

“Lilly does not know a stranger,” Lilly’s Cafe regular Ashley Easterly said. “Everybody who dines at Lilly’s is family.”

Another regular, Sara Karaosmanoglu, said everyone in the Lower Garden District knows Lilly because of her amazing food and hospitality.

“Trinh is a dedicated business owner who runs the whole show, but at the same time makes it seem like you are her favorite and most important customer,” Karaosmanoglu said.

When Easterly and her partner ventured from their usual Vietnamese spot to discover as many different Vietnamese restaurants as possible, they did not get very far before heading back to Lilly’s as their new go to spot.

At Lilly’s, vegan and vegetarian options are prepared in a separate part of the kitchen from other dishes to prevent any cross-contamination. The menu also features gluten-free options.

Once the new Uptown location of Lilly’s Cafe is up and running, Vuong hopes one day to open an all-in-one bakery, restaurant, and Asian supermarket to continue to share her family’s culture with the city of New Orleans. She said her hopes are high after a busy Mardi Gras where they served over 300 customers a day, only about 20 percent less than their usual Carnival season numbers pre-pandemic.

“Every day I want to be better,” Vuong said. “When I come in, we are busy…You see that, you’re happy, you see the love and the appreciation, the love for food. Because Vietnamese food is still small. A lot of people still don’t know what’s Vietnamese food…so it makes us feel very happy that my culture, my food is out, and people know about it.” 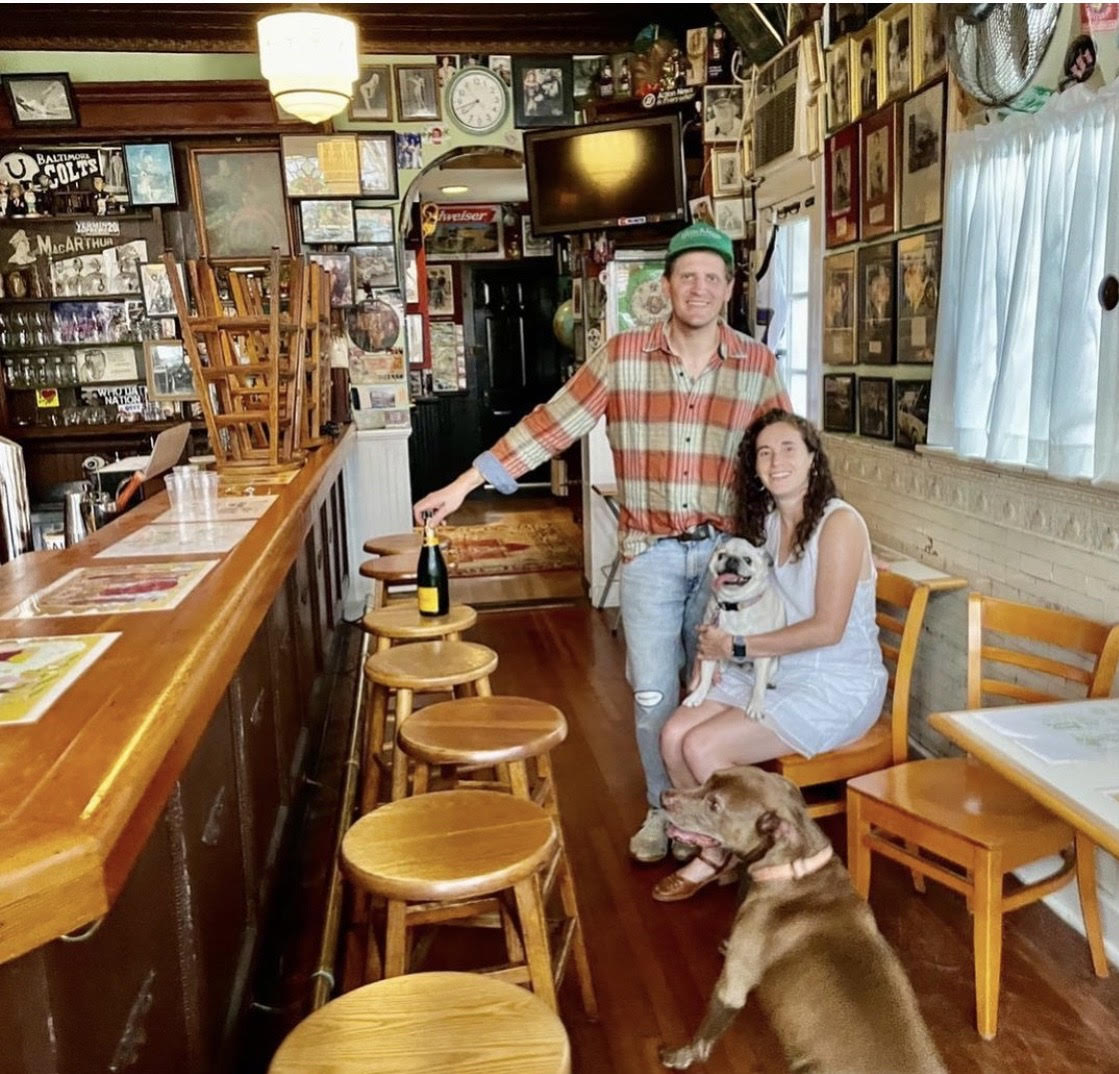 (BALTIMORE, M.D.)- Little Donna’s opened its doors in June in the Upper Fells Point neighborhood of Baltimore and has had […]