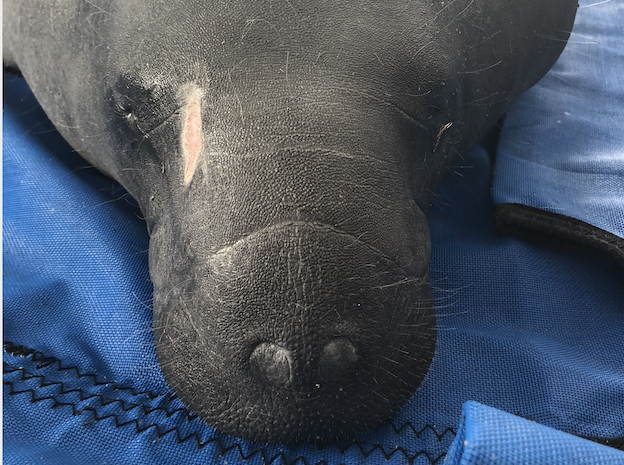 Felicia is a juvenile manatee who was rehabilitated and released into the waters of Manatee County [Credit: Amanda Vining]

(MANATEE COUNTY, Fla.) — Felicia is a juvenile manatee who spent the latter part of 2020 being rehabilitated at The Bishop Museum of Science after she was struck by a motorboat and subsequently orphaned. But Felicia is not alone. Last year saw the highest mortality rate for manatees in the U.S. since tracking began, due largely to collisions with boats. Now, 2021 is shaping up as an even deadlier year for these gentle marine mammals.

Residents of Manatee County, Florida, a community named for these beloved creatures,  revere their town’s namesake. The local government also has embraced the community’s manatee identity. A first-time visitor to the area will find manatee statues along the Bradenton Riverwalk, manatee paraphernalia in gift shops, and caricatures of manatees on various signs around the county.

Manatees are gentle, slow-moving marine animals who live in warm waters and eat vegetarian diets.  Lacking enough blubber to keep themselves warm during colder months, they migrate throughout the year to find warm temperatures. In fact, water temperatures below 68 degrees Fahrenheit can pose life-threatening conditions for manatees. The West Indian manatee, which is found on both coasts of Florida, migrates to the Sunshine State during the winter and then travels farther north during the summer months, typically to waters in Georgia and the Carolinas.

“Everybody is thrilled by them. All our lives, we’ve grown up knowing about them,” says Sarah Whisnant, who was born in Texas but has resided in Manatee County for several decades.

Manatee County is also home to a manatee rehabilitation facility located within The Bishop Museum of Science and Nature. The facility can house up to four manatees at a time, which the public can view from multiple areas around the aquatic tank. “Since we are also a museum, we allow the public to come in and view the manatees that we have in our habitat, but since all of our manatees are released back into the wild, we do not allow the public to interact directly with them because we don’t want for them to become accustomed to people and then want to come up to boats once they’re back in the wild,” says Remi Gonzalez,  the media and public relations director for the museum.

Until 2017, The Bishop Museum ( formerly The South Florida Museum) was home to Snooty,  believed to be the world’s oldest manatee living in captivity. Snooty was so beloved by locals that he was made the mascot of both the city of Bradenton and Manatee County. Snooty even was known internationally, and visitors from all over the world came just to see him.

“We were spoiled. Snooty was the star of the show. Everyone knew who Snooty was, and we all loved him.” says Whisnant.

“Our kids had stuffed Snooties and stuffed manatees. There were school field trips to see Snooty every year, and his birthday was always a really big celebration,” says Chauncey, describing an annual event that included lots of singing, kids’ activities, and a special vegetable cake for Snooty.

Then in July 2017, just two days after his 69th birthday, Snooty passed away. “We all mourned Snooty. It was a big deal.” says Chauncey. The death of Snooty the manatee resulted in community-wide grieving and even protests.

Community morale “took a hit because [Snooty] was a big part of the area’s identity,” Whisnant says. “We went into a mourning period that lasted weeks, months, even.”

“Snooty was a very large part of the character and fiber of Manatee County. After passing, the memory still lives on.  Snooty – and all manatees – are part of our county,” says County Commissioner -At- Large Carol Whitmore.

There have been multiple threats to manatees in recent years. In 2017 and 2018, red tide, a bloom of harmful algae, was a big concern in the waters of Manatee County and neighboring counties. Fortunately, Manatee County has been free of red tide since February 2019. But now the West Indian Manatee population faces one of its greatest predators: humans in boats, who have increased exponentially since the beginning of the coronavirus pandemic last spring.

As Florida Gov. Ron DeSantis permitted boating as a socially distanced activity during the state’s quarantine period, residents and tourists alike took to the water in higher numbers than ever before. As a result, a third of all manatee deaths in Manatee County in 2020 were attributable to collisions with boats, the highest percentage of human-related manatee deaths in over five years. And so far in 2021, manatee deaths in Florida have averaged nearly seven per day.

During the pandemic,  wildlife workers were unable to accurately track the manatee population and many deceased manatee carcasses were unable to be retrieved during government-ordered lockdowns. Because of this impact of the pandemic, the exact number of manatees that passed away in the waters of Manatee County in 2020 is unknown. 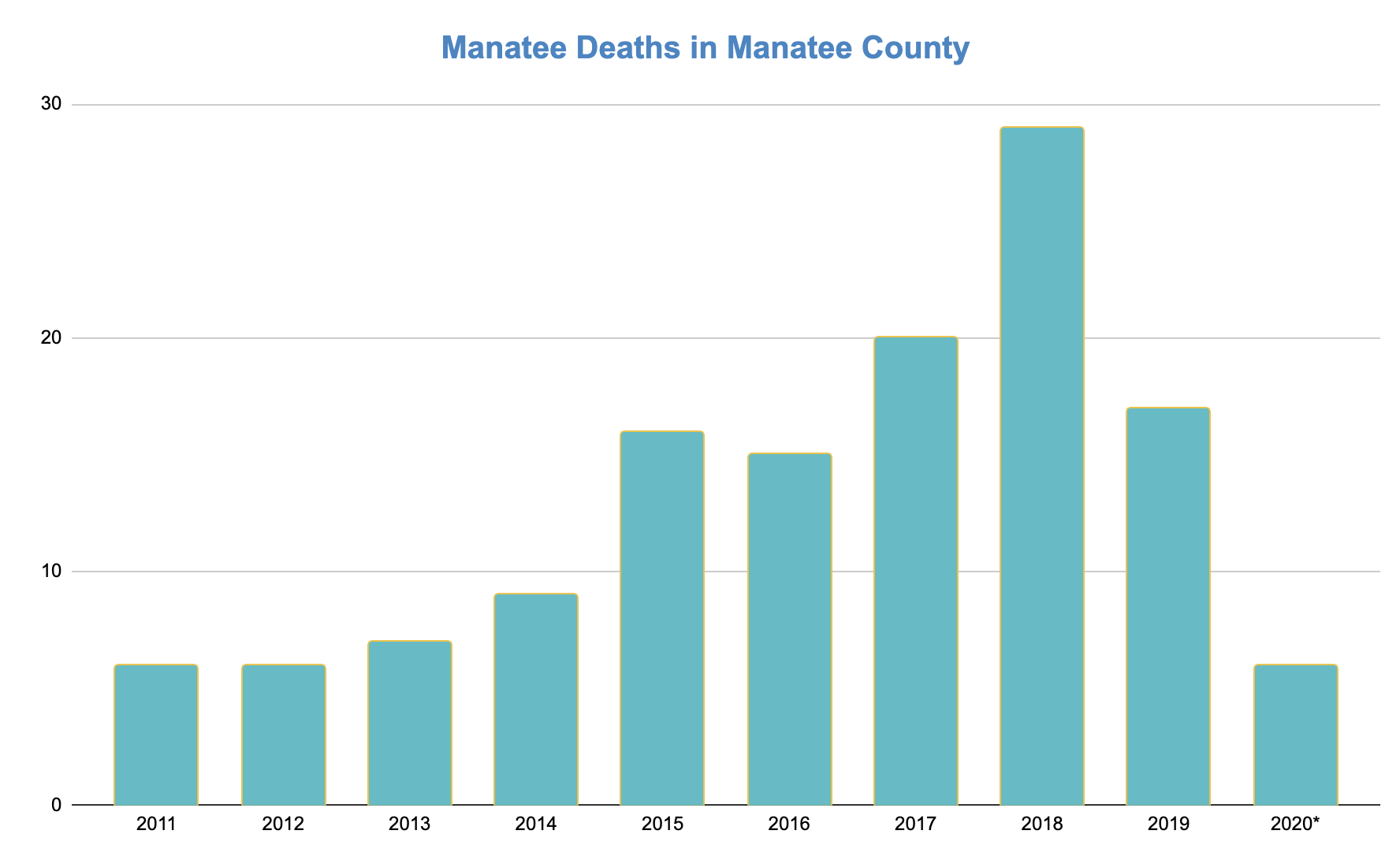 Residents of Manatee County care deeply for the manatees that share their waters. Even as boating-related manatee injuries are increasing, the citizens of Manatee County are doing what they can to protect their county’s namesake. “On the water, we’ve always slowed down in manatee zones,” says Whisnant.

Recently, an aggregation of manatees spent hours swimming in an estuary near downtown Bradenton. People slowed down as they drove by to catch a glimpse of these “sea cows” and bystanders tried to capture footage on their phones. Several observers described previous sightings of manatees in the local area, recounting how exciting it was to watch them swim and play in open water. “I never get tired of watching them,” says Ann Adams, a resident of Manatee County.

Felicia, the orphaned manatee, has now been released back into the wild. After being successfully healed in rehabilitation, she and another juvenile manatee named Viva were released on Apollo Beach, Florida in February. Now she will be able to swim with the other manatees that live in the waters of Manatee County.