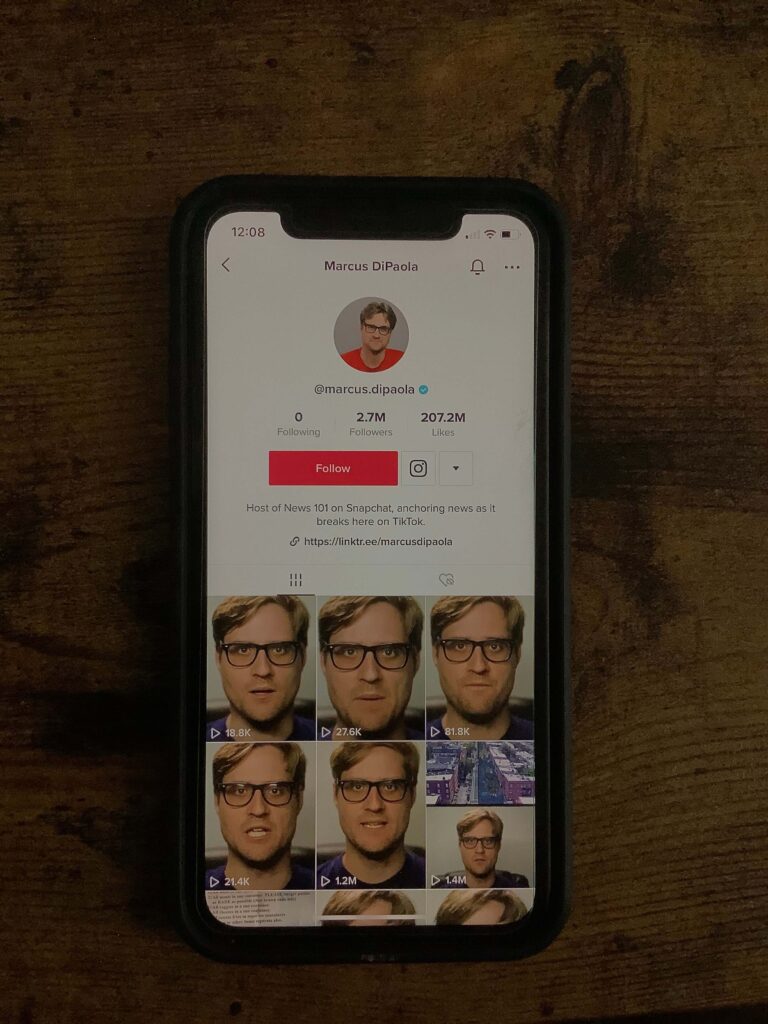 Marcus DiPaola, a journalist operating in the “grey area”  is best known for his 30 to 60-second TikTok videos where he “anchors” breaking news. Dipaola receives thousands of views each time he posts and has over two million followers. Due to his fame on TikTok, he was also given a platform on Snapchat as the host of News 101.

DiPaola is best known for his coverage of the Black Lives Matter protests and the Capitol attack on Jan 6. Much of his work on TikTok led to it being used on national television. According to his personal website much of his work was used by ABC News, NBC News, CBS News, PBS NewsHour, CNN, MSNBC, CNBC, New York Times, Bloomberg, Chicago Sun-Times, Business Insider, The Guardian, Forbes, Conde Nast, CNC World, Al Jazeera, Huffington Post, Getty Images, NPR, the Newseum, and RUPTLY.

Although DiPaola had been operating as a freelance journalist far before his TikTok fame, it is arguable the emotion and opinion he puts into his breaking news go against traditional journalism. This is most notable in his coverage on COVID, the insurrection, and Black Lives Matter. Furthermore, the majority of his news coverage exists on Tiktok and Snapchat which have become platforms for his work to be seen by the general public.

On DiPaola’s website, he offers an explanation of what drove him to become the “anchor” of Tiktok.

“I grew fast by being vicious about guarding my audience’s time from dumb shit they don’t absolutely need to know. If there’s nothing big happening, I don’t post,” DiPaola says. “I’m aggressive covering stories that might be big but could also turn out to be nothing. I simplify politics by focusing on the actual real-life result, skipping process talk, and my scripts use a unique writing style.”

DiPaola operates his Tiktok by himself, from writing his own scripts to producing each piece that is seen online and even making his own style guide which is accessible on his website. The latter also mentions his main goal: “Middle schoolers with learning disabilities with zero knowledge of government or politicians should be able to understand my scripts.”

That may be slightly off-putting, but he remains blunt and to the point about his reporting.

And other TikTokers have caught onto the trend. A  Washington Post article from May 3 featured two personalities, Josh Helfgott and Lisa Remillard, who deliver news in a similar style to Dipaola.

The article also suggests that DiPaola, “May be on to something,” as there is evidence suggesting younger generations utilize social media as news outlets instead of other more traditional mediums.

“In a 2020 survey from YPulse, a youth brand research firm, 51 percent of Gen Z respondents reported getting their news on TikTok, as opposed to 26 percent of millennials,” freelance journalist Kalina Newman reported in the article.

Regardless of whether or not DiPaola and other fellow storytellers on Tiktok are journalists in the traditional sense, it is clear that operating in the ‘grey area’ has led them to success in the journalism field and likely will be a continued interest for journalists as they search for new platforms.