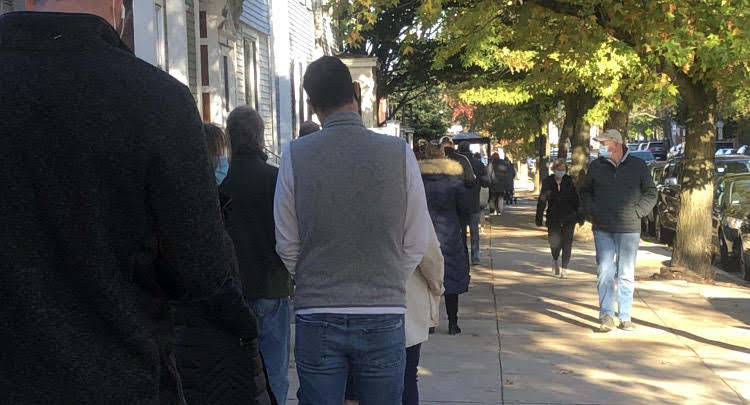 Voters wait in line in a Boston neighborhood to cast their ballots on Election Day. {Credit: Danielle Saitta)

Voters wait in line in a Boston neighborhood to cast their ballots on Election Day. [Credit: Danielle Saitta]

(BOSTON, Mass.) — Massachusetts voters said “no” to a change in their state-level voting method. Despite millions of dollars in contributions in favor of ranked-choice voting, ballot Question 2 was rejected and will not be implemented into future local elections. State-level elections will continue the traditional single-vote-per-candidate voting system to elect their state legislators, federal congressional representatives, and county officers.

Early on November 4, the Associated Press determined that the ballot measure had failed to pass. With 98% of the votes counted,  54.6% were opposed and 45.4% were in favor. Had it passed, Massachusetts would have joined more than a dozen other states that either implemented or adopted ranked-choice voting. For example, in 2020, Maine decided to utilize ranked-choice voting for their future elections.

The Click’s Danielle Saitta reports on the debate over ranked-choice voting in Massachusetts:

The Commonwealth of Massachusetts traditionally follows a plurality voting system. This grants each voter one vote for one candidate. The winner is then determined by the number of votes each candidate received. The person with the most votes is then elected.

The state also used semi-closed primaries, also known as a hybrid primary. This system is a primary election where unaffiliated voters can participate in the partisan primary of their choice. It also allows affiliated voters for a particular political party to only vote for their parties’ primary.

According to the Massachusetts Office of Campaign and Political Finance, over $9.9 million was raised in favor of ranked-choice voting. In contrast, less than $4 million were contributed to its opposition.

Total of funds raised in support and in opposition to the ballot measure. [Credit: Massachusetts Office of Campaign and Political Office]

According to an article on Oct. 28, Governor Charles Baker and Lt. Governor Karyn Polito are among those who oppose ranked-choice voting. On Sept. 20, the same outlet reported a joint statement from both of the local governing officials.

“At a time when we need to be promoting turnout and making it easier for voters to cast their ballots, we worry that Question 2 will add a layer of complication for both voters and election officials, while potentially delaying results and increasing the cost of elections,” said Baker and Polito in the statement.

Jesse Mermell, a co-chair for the ranked-choice-voting campaign, is also reported as responding to the governor’s argument saying that it was “insulting to Massachusetts voters.”