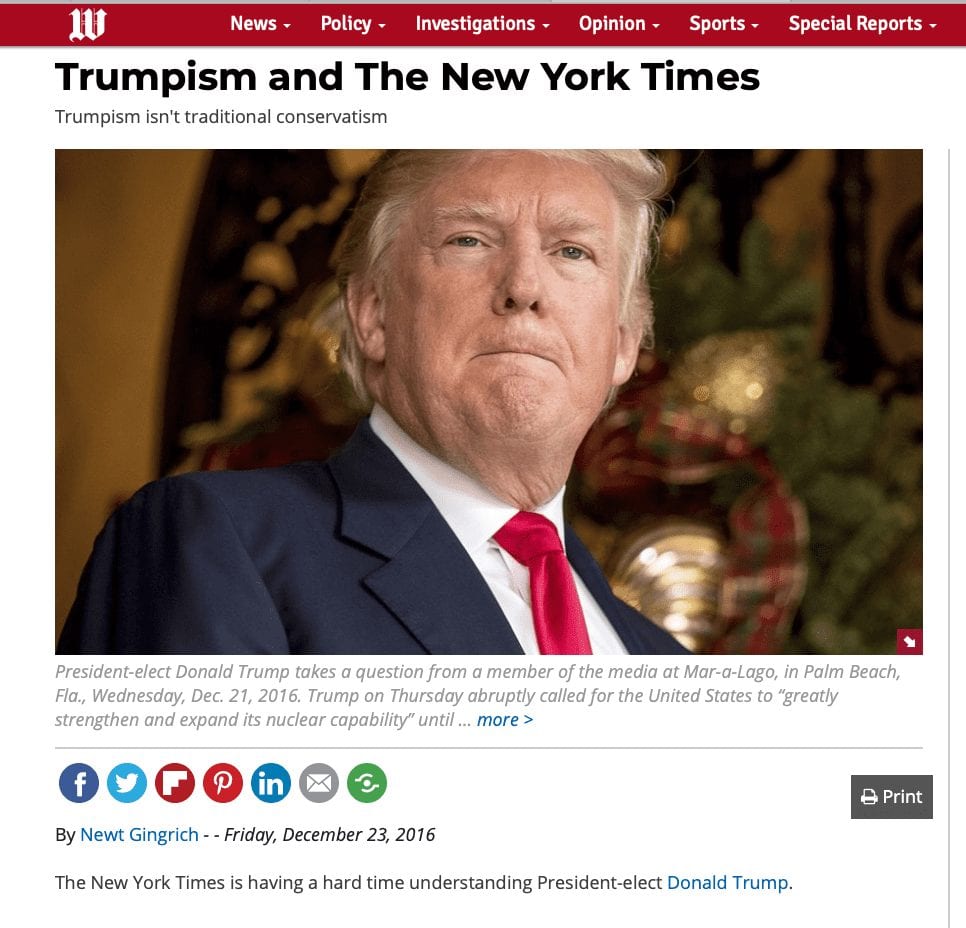 Former Speaker of the House Newt Gingrich wrote an op-ed in support of then President-elect Donald Trump in December 2016.

Media Criticism: In Hindsight, Was Gingrich Right to Criticize The Times for Its Trump Coverage?

NEW YORK – When Newt Gingrich wrote a Washington Times article in 2016 advocating for then President-elect Donald Trump, did he imagine the chaos, controversy, and corruption that would follow the new administration?  Gingrich, former U.S. Speaker of the House and a Republican who ran for president in 2012, became a columnist at the Washington Times in 2015.  Since that time, he has written several articles explaining, praising, and defending Trump, while also bashing anyone who he felt was treating the president unfairly.

One target in particular was the New York Times who Gingrich accused of reporting “inaccurate and misleading coverage” of Trump.  Despite the newspaper’s 168 history, the 127 Pulitzer Prizes it’s been awarded, and the organization’s highly regarded and respected reputation around the world, Gingrich felt that the newspaper didn’t give Trump a fair chance simply because they didn’t understand him.  He asserted that Trump’s leadership style was so vastly different from that of previous presidents that the Times automatically counted him out as an effective leader and, at least according to Gingrich, nothing could be further from the truth.

Gingrich acknowledged that Trump is “different’ and even said that he isn’t a traditional conservative leader; however, he touts that as a strength, not a weakness.  Gingrich noted many of different, or “unique”, moments that made Trump stand out from the previous candidates including the fact that he was the only person, and the only billionaire, ever elected President of the United States who had never served in the military, nor had he been elected to any official office previously.  In addition, Gingrich added, Trump’s effective use of social media on the campaign trail surpassed everyone else’s.  He went to on state that despite being outspent in the primary and general elections, Trump was still won. All these “achievements”, Gingrich felt, should have been “worthy of a certain respect” about Trump.  A respect he accused the Times of not affording the President.

What really appeared to anger Gingrich about the Times’ reporting of Trump was what he referred to as their “elite mindset’ that continuously had gotten it all wrong.  He claimed that they not only were wrong about Trump’s standing during the election process, but were also off the mark about how the new president and his team were going to transition into office.

What is so interesting about Gingrich’s 2016 article in 2019 is being able to look back at his staunch advocacy for Trump, his new ideas, vision, and policies; to look at Gingrich’s accusations against the Times of “willfully false and mischaracterization” reporting on the administration.  Then to look at how the presidency has actually played out since then. In 2016, Gingrich stated that the Times misreported Trump’s position on foreign policy and that he did not support a general ban on Muslims entering the United States.  What we know in 2019 is that “more than 31,000 people have been denied entry into the United States” since Trump’s travel ban, upheld by The Supreme Court, went into effect in 2018, and that five out of seven countries on the travel ban list were Muslim.

In the same 2016 article, Gingrich referenced a few key figures of Trump’s team including General James Mattis, a former Marine general and Trump’s secretary of defense; Rex Tillerson, who Trump appointed Secretary of State, and General John Kelly, who was Trump’s Chief of Staff. Gingrich took issue with the Times’ claim that Trump’s new team “consists of retired generals and an oil executive, few of whom have experience in the daily cascade of crises that confront every White House.”  He stood by Trump’s picks and defended their experience that he said would enable to them to do their jobs.  What we know in 2019, is that each of these men were either fired or resigned from their posts amid rumors of turmoil and disagreements with the president.  According to Fortune, the rate of turnover in Trump’s administration “is the highest for any presidency in decades”.

How, can Gingrich advocate for such a “leader” who has clearly been unable to lead?