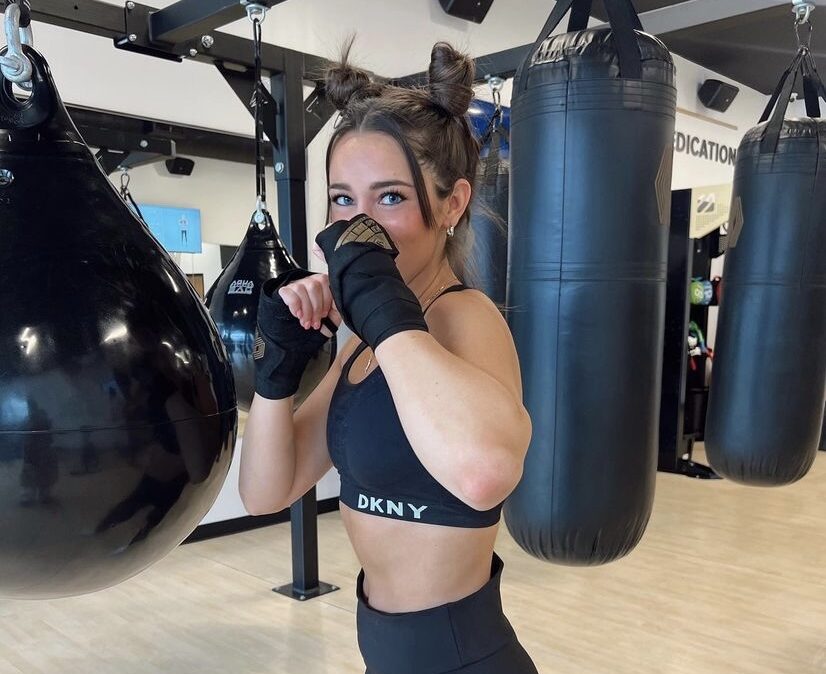 Maddie Costantino laced up her sneakers as she headed out the door for her 8 a.m. boxing class at Mayweather Boxing+Fitness. On mornings she’s not at Mayweather, she’s at pilates, yoga, or on a long-distance outdoor run. And no matter what she’s doing, the 22-year-old is sharing it with her 20K Instagram followers.

“I like to consider @maddiecostfitlife my glorified scrapbook,” she said. “Social media is one giant highlight reel, but there’s so much more to these little squares and aesthetic moments..it’s also a diary of my life.”

As a freshman in college, Costantino said her daily habits were nothing like what they are now. Instead, she said she was “the most unhealthy person,” as she hardly worked out and ate whatever she wanted rather than what her body needed.

But, the new University of Delaware student refused to gain the rumored freshman 15. She began researching proper fitness and workout techniques so she could feel both comfortable and confident in the gym.

During her sophomore year at UDel, Costantino decided to start a new Instagram account to post exclusively about her health and fitness journey. She was inspired to share her fitness journey thanks to Aubre Winters, a fitness influencer she followed who posts very raw and real content.

In early January 2019, she shared her first fitness-focused post; an image of her in a bright blue workout set. “This is what I do every day and I love it!” she captioned the post. “So why not share it? Everyone has the ability to change and create a life they want and I’d love to inspire others to do so too.” 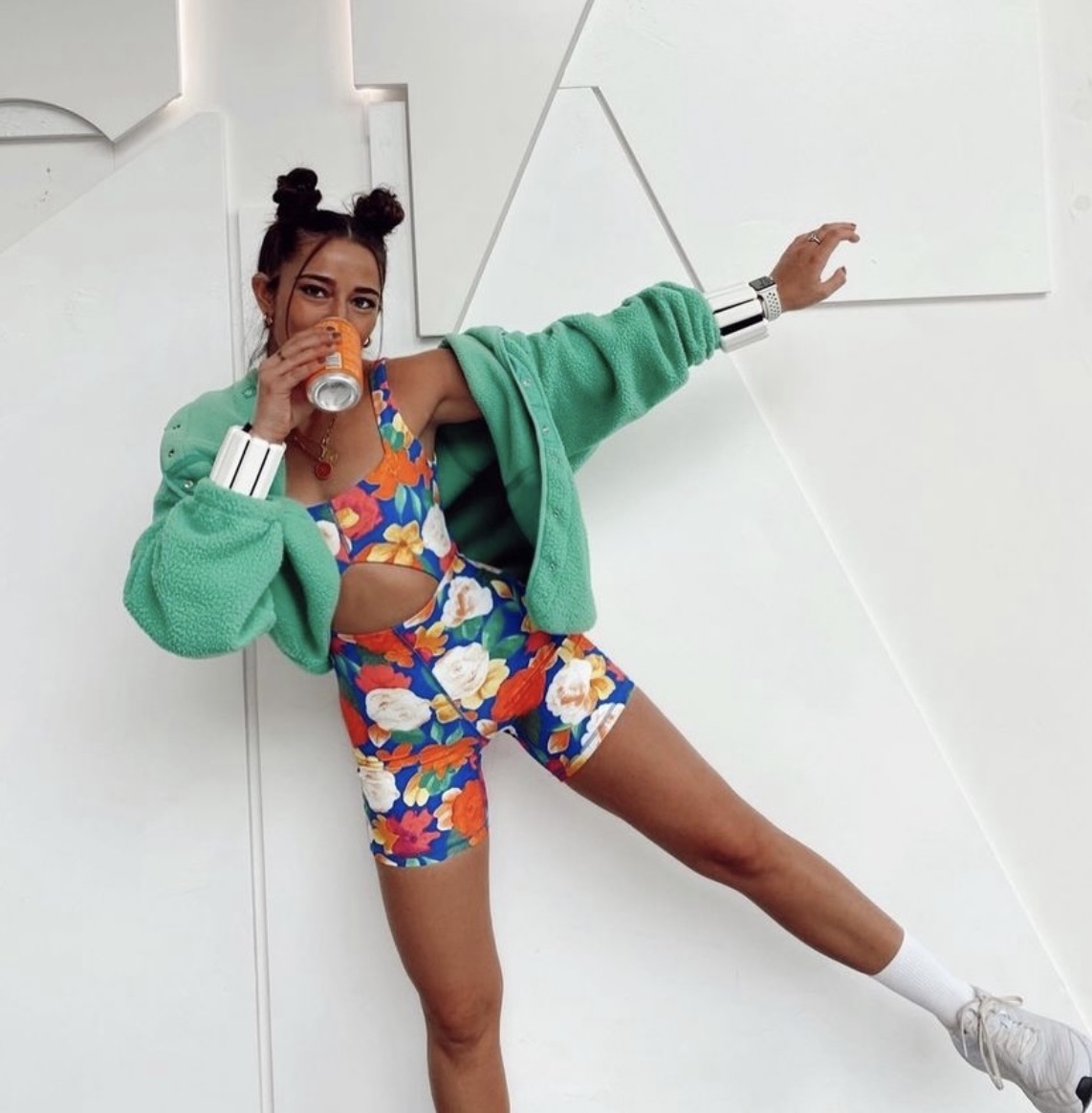 The fitness lover’s goal was to have fun sharing her passion rather than focusing on just getting as many followers as possible.

“You can’t go into it with the mindset of wanting to ‘gain followers’ or ‘be an influencer,’” said Costantino. “You have to be passionate about what you post or genuinely have to want to help others and that’s truly how you grow.”

It wasn’t until the end of her junior year of college, about a year and a half after creating her fitness account, that it really began to take off. She began reaching out to brands she loved, explaining what kind of work she was looking to do and seeing if they had any positions she could help out with. “I was basically creating my own position saying my experiences and what I was passionate about and seeing what they could offer me, asking, ‘Do you have a job for me?’”

After graduating from college in 2021 with a degree in business marketing and advertising , she began working a corporate advertising job for Spark Foundry, where she would communicate with tv networks on airing commercials for Campbell’s Soup. But within a few months, she got a message from RP Creative, a design and marketing group, asking if she wanted to create videos for the brands Nuts and More, Truth Bar and Pnuff Crunch. They offered her “a crazy salary” and she jumped into social media full-time, quitting her job at Spark.

She’s not the first post-grad to leave a corporate position for social media. Thanks to the viral social media app TikTok, many people have been making the transition from a “normal” career to a social media based one. Though she runs social media for RP Creative, she simultaneously creates content for her own personal fitness account, in which she collaborates with brands to make profit.

According to a study conducted by the Morning Consult, 86% of Gen-Z said they would want to make money posting on social media, and 54% of them said they would become an influencer if they had the opportunity to.

Keeping followers engaged and brands willing to work with you is no easy task. Costantino has to constantly produce unique, high quality content to keep her followers and brands interested in her.

“When I first started, random brands would reach out to me, very small companies, it was more just like ambassador [someone who is paid or rewarded for promoting a brand’s products] things,” she said.

“I would just reach out to companies and ask for a gifted item and then post it on my page. The more I grew, the more companies would reach out to me and do little paid collaborations. It took about a year.”

Now, three years into her @maddiecostfitlife journey, she has racked up over 20K followers and even worked with a number of well known brands such as DKNY, Motrin, Drunk Elephant, Banza, Goli Nutrition, Chamberlain Coffee, Vital Proteins, Drink Poppi, and more.

The content creator said that the more she was exposed on other brands’ pages and the more collaborations she did, the quicker she began to grow.

“I usually receive between $500-$750 for Insta stories and $1000-$2000 for in-feed posts, but most run as longer lasting collaborations because I love to create genuine relationships with the brands I work with,” said Costantino.

With hours of time poured into her work, she said that many of her upcoming in-feed posts with brands and partnerships are even making her between $2000 and $5000. 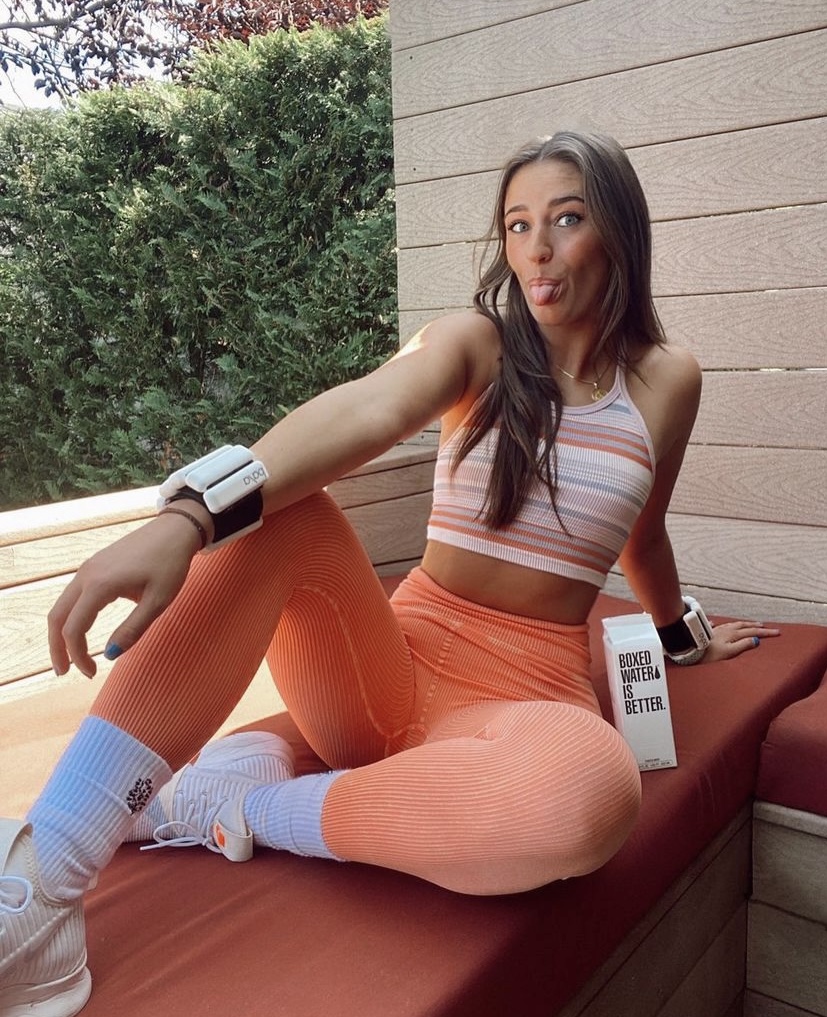 Costantino posing in one of her Free People Movement outfits in an Instagram post from August 2021. [Credit: Maddie Costantino]

She feels the more real and authentic she became on social media, “showing the more college-realistic lifestyle,”  the better her content would do.

In a post opening up about her most recent breakup, she wrote, “My last breakup was the worst. It ended right before quarantine and put me in such a dark place. The number one advice people gave me when it ended (and I’m giving you too) is to ‘work on yourself.’ But I think that’s what made it so hard for me because I was so confused at how I could possibly work on myself any more than I already had been.”

As for returning to the corporate world, Costantino said she hopes to stick with social media as her long-term career. Now that her job aligns with her passions, she said she definitely wants to continue it as she is getting paid for what she loves to do.

“I feel like when I started out it was just fitness, but now it’s a whole lifestyle routine. The raw, real version of me,” she said.