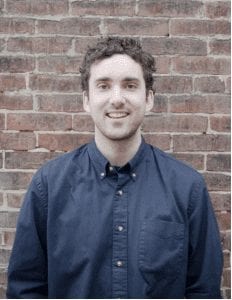 Haley was as a map designer for a water utility company before his media career switch.

Michael Haley is a Philadelphia-based writer currently working as a research editor for Dow Jones.

Haley grew up in Newtown, Pennsylvania, and attended Temple University where he graduated in 2015 with a bachelor’s degree in geography and urban studies. His interest in media began in the wake of the 2016 presidential election. Curious about approaches to news and the direction of journalism, Haley decided to pursue a job in media and began working at Dow Jones.

At Dow Jones, Haley researches companies of all sizes that are backed by venture capital and private equity. He interviews company founders and executives to compile financial histories of the business, writes business profiles financial summaries, and assists business journalists in their reporting. His work has been cited in The Wall Street Journal, Barron’s and other publications.

“Working as a research editor at Dow Jones, I am able to learn about and discover new startup businesses and emerging technologies that I find fascinating,” says Haley. “I am looking to take the next step in my career and master writing skills to cover these topics in a journalistic setting.”

Haley has also contributed to Techbullion.com where he covers a wide array of innovative topics, from an ad-revenue company using facial recognition software to award users cryptocurrency in exchange for watching advertisements.

Haley is pursuing a journalism career focusing on technology, startups, artificial intelligence (AI)  and other emerging technologies. With a master’s degree from NYU, Haley plans to use long-form style to explore dense topics like blockchain and AI, as well as how startups compete with tech giants like Facebook and Google.