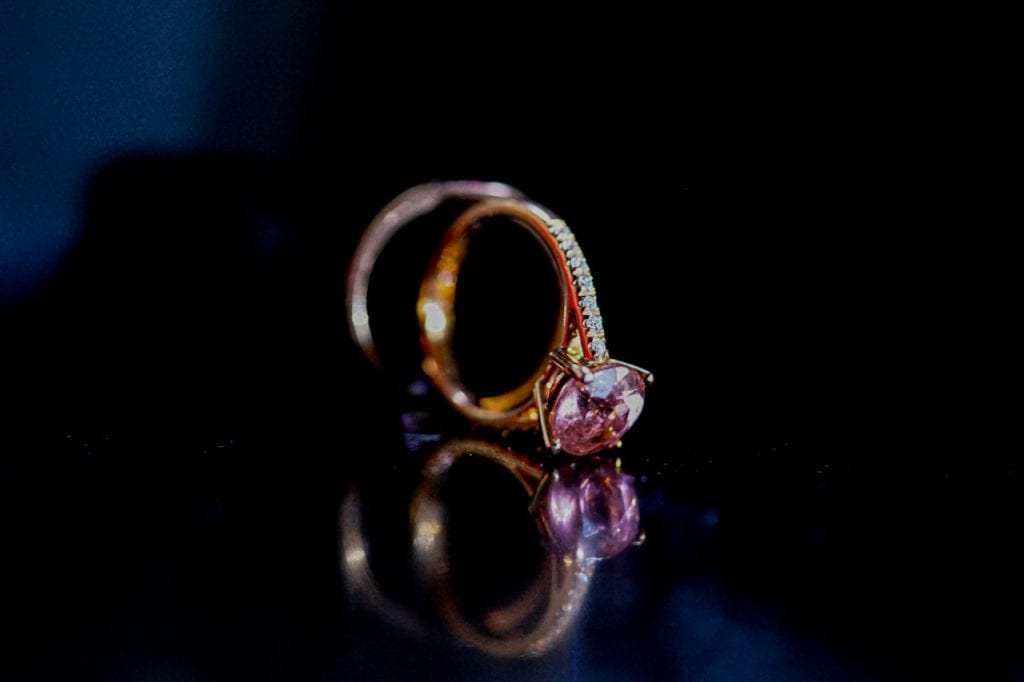 New York, N.Y. — Diamonds are forever. But so is sapphire, ruby, and plain gold, too.

The idealized engagement ring — a show-stopping diamond solitaire — is still king … er, queen: Diamonds are holding on to an 80 percent revenue share of all gemstones, according to a Future Market Insights report. But jewelers and market forecasters agree that unconventional, ethically-conscious millennials are energizing a new industry of highly customized wedding bands.

Zameer Kassam, a NY-based jeweler, told The New York Times in August, “This approach is a complete departure from the rest of the industry,” where the focus is on carat weight and trendy cuts. The Times reported that, according to WeddingWire’s 2018 Newlywed Study, 20 percent of couples now opt for tailor-made, one-of-a-kind pieces as their engagement rings. What’s more is that the percentage of couples choosing a diamond as the engagement stone of choice is falling: from 74 percent in 2018 to 71 percent this year.

Student-loan-saddled millennials are also more mindful of the price tag. Where 20 years ago it was not unheard of to spend upwards of $5 – $10,000 (or more!) on an engagement ring, most indebted, engaged couples — already forced to put off starting a family until well into their thirties — would get major cold feet at the idea of dropped quintuple digits on a polished rock. These days, according to a survey by TD Ameritrade, two-thirds of young people aged 15 to 28 believe an engagement ring should cost no more than $2,500.

That’s one reason why so many are opting for diamonds created in a lab.

“Prices are the number one driver of growth in [the synthetic diamond] category, with stones costing 70 to 90 percent less than their ‘natural’ counterparts without any discernible difference in quality and look,” said Scott Thompson, founder of jewelry brand Carat, to the South China Morning Post last year.

Tighter budgets, along with a flair for the sentimental, may also be driving millennials to invest in other types of rare gems. Data by London-based jeweler Nadine Aysoy also showed that 32 percent of young adults chose engagement rings with their birthstone, and another 25 percent going with that of a loved one. Requests for colorful and durable — marginally less so than diamonds — precious stones, such as blue sapphire, red rubies, yellow citrine are all also on the rise, noted Nadine Aysoy.

Rings that tell a story

High-carat, natural (mined) diamonds allow designers to charge big bucks on their work featuring the rare rocks, but indie jewelers can’t afford to keep such valuable wares on their shelves for long. Nevertheless, the engagement ring business has always been good, so savvy metalsmiths are cashing-in on millennials’ hunger for personalized pieces.

For a ring so “important [and] symbolic,” Julie Romenchenko, founder of Scottsdale, Ariz.-based Just Jules, told The Click, “it’s just an honor to be asked.

There’s “too much competition,” said Romenchenko, who has been in the business for 30 years, to turn a sustainable profit on their own designs. “There’s a much bigger mark-up on other types of jewelry than there is on a diamond solitaire,” she added, which means even less on diamond-free custom designs.

Where once they could not compete with the brand recognition and buy-power of De Beers, Tiffany or even Zales, nowadays designers are able to subsidize their artistic portfolio with custom ring orders.

Brooklyn-based metalsmith Daniell Hudson, who is a millennial herself, decided to shift her focus from producing day-to-day pieces for big brands such as Urban Outfitters or Anthropologie, to custom heirloom and wedding jewelry — which helps her avoid the ethical concerns involved in her industry while also promoting her own creativity.

The fact that she’s also “fulfilled” by doing personal pieces makes it all the more worthwhile.

“Not only does it enable me to keep things as ethical as possible for my own business, but it’s also very emotionally fulfilling because you’re making something for people that they’re extremely excited [and] really emotional about,” says Hudson, who adds that her clients often cry when she presents their finished treasures. “It feels like I’m doing something genuine that is really meaningful to people. And I feel like that’s the best part of what I do.”