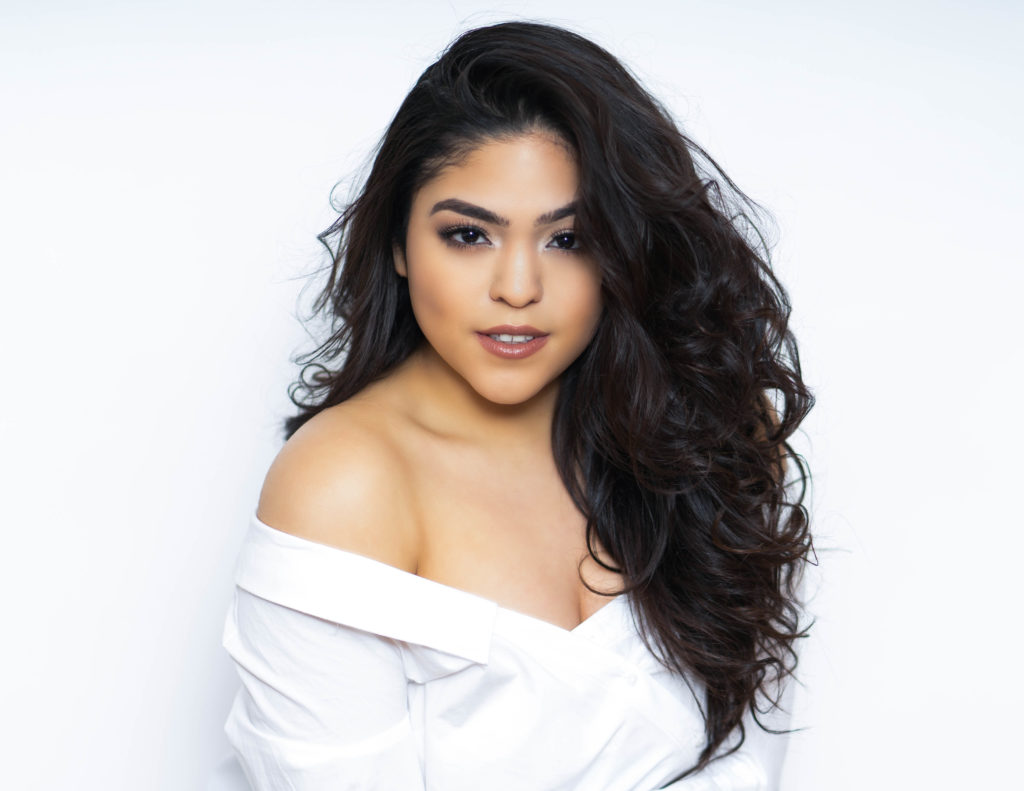 She’s beauty and she’s grace, she’s… Miss New Jersey US International 2018, Geomarilyn Joaquin. But her friends call her Gigi. And in 2021 the 23-year-old is coming for the crown – the Miss Universe crown.

Joaquin is still relatively new to the world of pageantry, competing for the first time at age 19, though you’d never know it. She looks and acts the part of a beauty queen, equal parts Dominican and Ecuadorian, punctuating all of her sentences with a laugh, and possessed of astonishingly good posture (how does she sit that straight?). Even after the fallout of an abusive relationship, including a year-long hiatus from pageants, she’s still brimming with positivity, gearing up for her triumphant return, in “fearless mode.”

In a post- #MeToo society, pageants can seem outdated, even gauche. But Joaquin sees these contests as empowering. Unlike the cat-fight Hollywood depictions, Joaquin says the women she’s competed against help each other with quick changes, and offer words of encouragement and even advice. She’s made many close friends among her rivals.

But it wasn’t comradery that drew her to the pageant world in the first place.

“In the beginning, when I was younger, it was just because I loved the whole being in front of a crowd and rocking the stage,” she says.

It’s not the most politically correct sentiment, and when she realizes what she’s said – she can read a room – she laughs. These days, contestants and representatives spend a lot of energy bucking the notion that pageants are nothing more than beauty contests. Two years ago, the head of the board of trustees for the Miss America Organization, and Miss America 1989 – Gretchen Carlson – announced that they were discontinuing the swimsuit competition.

“We are not to judge you on your outward appearance,” Carlson said at the time.

Joaquin has changed, too. She won Miss New Jersey US International at 21, and shortly after she found herself in her first serious relationship. It moved fast, and was good – until it wasn’t. According to Joaquin, her boyfriend’s father was in prison for murder, and, perhaps because of the circumstances in which he was raised, he was angry – so angry. She cried every day for a year, she says. She distanced herself from her family, and she stopped competing.

“I felt like my life was being taken away every single day,” Joaquin recalls, her sunny demeanor darkening. The last straw came in the spring of 2019.

“We got into a really bad argument that got really aggressive and physical,” she says. “I knew that’s not how anyone should live. And so that was my wake-up call.”

Joaquin seems pained recalling the experience, but she also knows that she’s not alone – in fact, she’s not the first pageant contestant to report having been a victim of domestic abuse.

In 2014, Miss America (originally Miss New York), Kira Kazantsev, made headlines when her own experience in an abusive relationship inspired her to make domestic violence her platform topic for the pageant that year.

“I think we still hold on to some of those stereotypical beliefs. When we think about the typical victims of domestic violence, we think of someone who is poor, might not have many resources or is unintelligent,” Barbara Paradiso, director of the Center on Domestic Violence at the University of Colorado Denver, said in an interview with NPR. “When you have someone who has been able to be as successful as a Miss America, that helps us put this in perspective.”

It shouldn’t come as a surprise. According to the National Coalition Against Domestic Violence, 20 people per minute are abused by an “intimate partner — 10 million victims a year. The most commonly abused demographic? Women between ages 18-24. Though, seeing women like Kazantsev and Joaquin speak openly about their experiences – it does land a little differently.

But almost as quickly as she’s wilted, Joaquin brightens. If it weren’t for that fight, and subsequently, the end of her relationship, she wouldn’t be gearing up to compete again now. She’s focusing on getting herself healthy – mentally and physically.

“It’s not so much, ‘Oh, you have to be super skinny.’ No, it’s because you’re really promoting a healthy lifestyle. Being more active. Self-care is really big. And also preparing yourself mentally. A lot of it is mindset.”

What Joaquin is most excited for is to be back amongst her peers, many of whom she’s known for years. It’s the sense of sorority that she values most. And it’s this that makes it possible for her to envision a world where beauty pageants can serve as a catalyst for change, alongside movements like #MeToo.

“It’s a sisterhood, for sure. We uplift each other 100%. If someone’s down, we’ll be there to support them,” she says of the other contestants. It’s a sentiment thats been shared widely.

In 2001, Miss USA 1963 – Marie Ozers – addressed a room of “winners past and present,” as told by Phillip Potempa for the Northwest Indiana Times:

“We’re more than just the winners. We’re women of accomplishment from around the globe,” Ozers said. “To best describe the bond in this room right now, I’d say it’s a sisterhood under one crown.”

This is an organization, and a collective of women, that was there for Joaquin at a time she so desperately needed. She isn’t the first and, presumably, won’t be the last. It has resulted in a newfound fervor and determinedness to instill that same level of confidence in her peers this time around. She cannot wait to share a stage with her sisters again.

In the meantime, though, she’s focusing on all the details: “How to walk, how to talk, how to… sit. When you’re in front of a judge, or a panel of 5-7 judges, you need to have good posture.”

Already having been crowned Miss New Jersey US International, Joaquin has big goals for this time around: