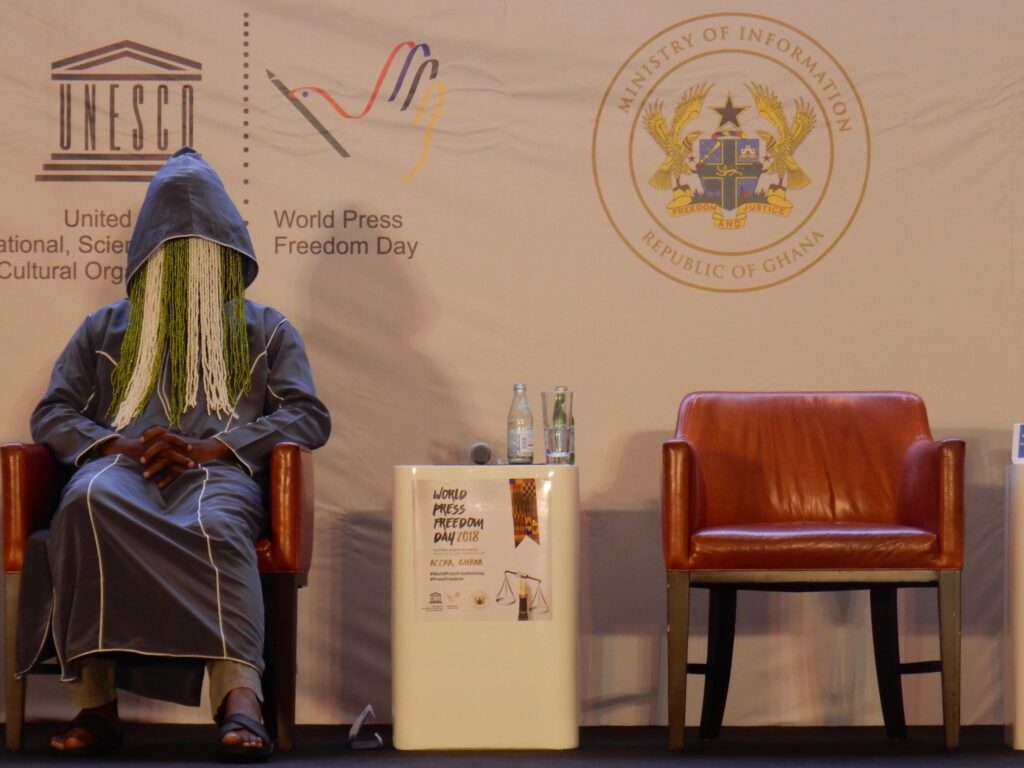 ‘Name, Shame, and Jail:’ The signature of the most renowned journalist in Africa

In Sept. 2015 when Anas Aremeyaw Anas was ready to premiere his film “Ghana in the Eyes of God” on national television, there was already backlash from the release of the documentary’s trailers. Television stations that would have broadcast the film were threatened with lawsuits. As a response, Anas offered complimentary screenings in the capital city of Accra and throughout Ghana because, he said, “justice is for the people, let them see what justice means in this country.”

Crowds of Ghanian citizens attended the film screening for free. The documentary — produced after two years of undercover reporting where he collected 300 hours of raw footage — helped to dismantle Ghana’s corrupt judicial system. Over 100 court officials were investigated for allegations that they had accepted bribes and demanded sexual acts in exchange for political favors. Ultimately, 34 judges were removed from their posts.

Before “Ghana in the Eyes of God,” Anas was known for shining spotlights on corruption and crime. Anas cites a method of “Name, Shame, and Jail” as the motto for his work, which has exposed corruption in the world of Ghanian soccer, ritual infanticide, illegal organ harvesting, the mistreatment of foreign prisoners in Thailand jails, human trafficking rings across the globe, to name a few. A lawyer-turned-journalist, Anas operates under the governing motive of his journalism—holding those in power accountable and protecting human rights. That mission requires the extreme measures he has taken in over two dozen investigative works.

As is his method, Anas and his private investigation team Tiger Eye PI Services, used hidden cameras to capture the malfeasance of Ghana’s judiciary officials. Could his reporting have been as rigorous had he not gone undercover? Is Anas’ mission and particular practice of journalism worth the risk, including constant endangerment and threat to his team?

“Using sophisticated hidden cameras and a range of prostheses, he has famously disguised himself as a rock, as a police officer, as a janitor in a brothel, as a priest in a Thai prison, and as a patient in a mental-health facility, among many other roles, in order to obtain evidence that will—as his oft-repeated tagline goes—name, shame, and jail perpetrators. His aim is to collect evidence strong enough to push state institutions into action or reform, and his increasingly high-profile, high-impact investigations have earned him the unofficial mantle of most feared journalist in Africa.”

During his 20-year career as a journalist, Anas has somehow managed to keep his face hidden from the public. In a 2015 interview with BBC reporter Sammy Darko, Anas dramatically staged an “un-masking” reveal, but his face was covered with a prosthetic.

As a journalist, he goes out in public, takes interviews on television, has spoken at a TED Talk—but his face is always concealed. Fans of Anas pay homage by wearing similar disguises. His folk hero status has even entered the vernacular; writer Elizabeth Ohene shared in a BBC article the extent of Anas’ influence in everyday language: “To go undercover is ‘to anas.’ To make secret recordings is ‘to anas-anas.’ To wear disguises is to ‘do an anas.’ To be caught in the act is ‘to be anased.'”

“To have someone exposed taking bribes is to have that person being given the full ‘Anas Aremeyaw Anas.'” Ohene explained.

As the Anas name has become synonymous with concealing one’s identity, the journalist has also been criticized for putting his own celebrity in his reporting. Anas has responded by saying he is intentional about the branding of his work, fully aware that his image increases the exposure of the story, all in the service of journalism.

Another ethical dilemma lies in whether Anas’ secret video recordings violate individual’s right to privacy in the name of the public’s right to know. Virtually all of his reports expose the wrongdoing of those who have abused their positions of power; if he filmed private citizens, those cases involved victims harmed by employers, teachers, or community leaders.

The very use of Private Eye, a hybrid of a media production company and investigation service serving both private and public sector clients, blurs traditional lines of journalistic standards.

The risks these investigations carry have serious, sometimes fatal consequences.

In January 2019, Tiger Eye investigator Ahmed Hussein-Suale was killed, a tragedy that highlights the political stakes of the reporting, raises growing concerns over freedom of the press, and further underscores the argument for concealing Anas’ identity.

The assassination of Hussein-Suale took place after the release of “Number 12,” a film that unseated the president of the Ghana Football Association (GFA) and exposed bribes that spanned the globe, resulting in a scandal that rocked the GFA. Hussein-Suale’s death was hard on Anas but did not deter him: weeks later, Anas released “Galamsey Fraud,” an expose on officials taking bribes in the Ghana mining industry. 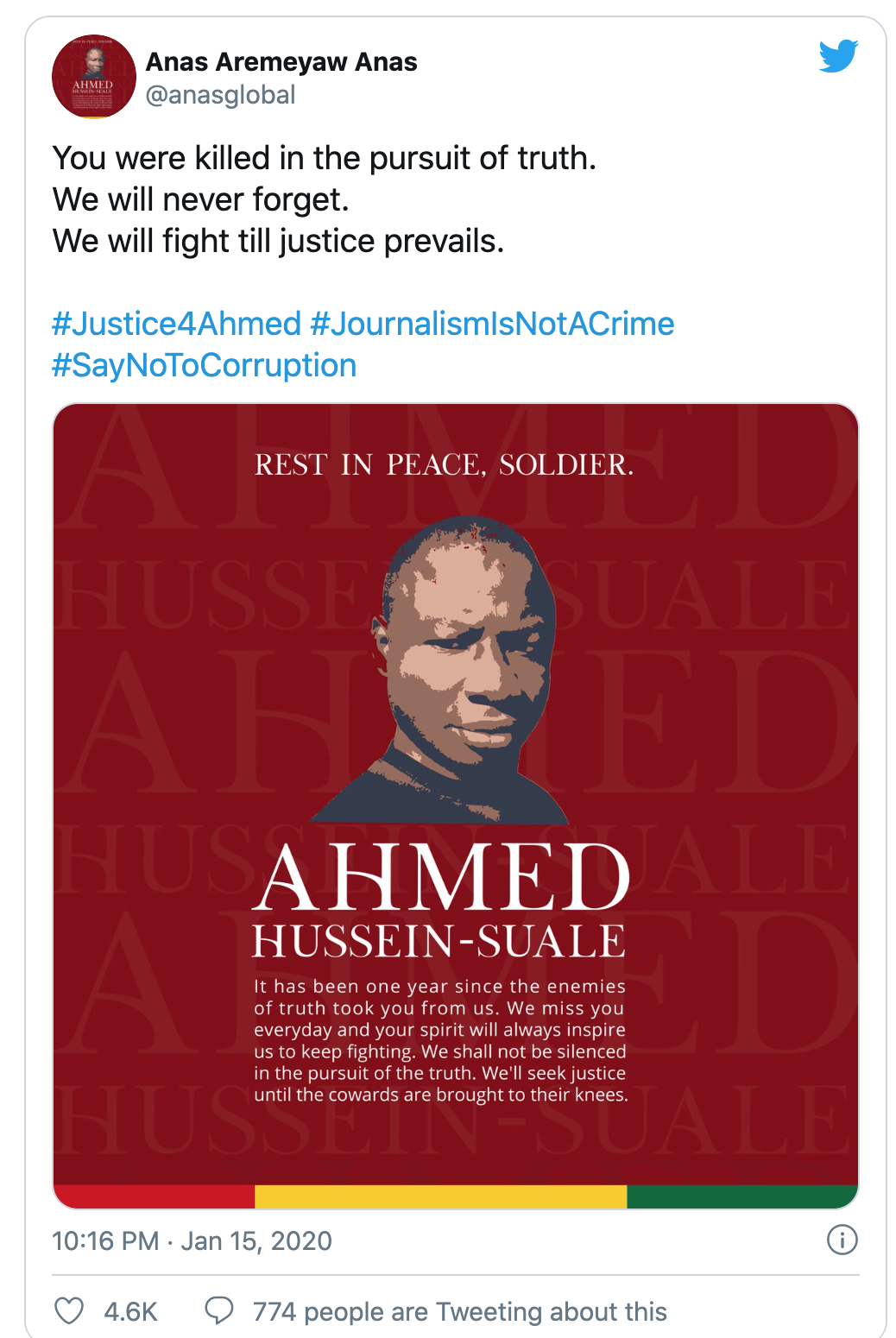 Most members of Tiger Eye—an ever-growing collective of journalists, producers, directors, investigators—have to protect their identities. Even with a level of anonymity surrounding this sprawling, expansive group, only a few of Anas’ closest friends and associates know what he looks like. “I work every day expecting that somebody will snitch,” he said in a Columbia Journalism Review interview with Susana Ferreira.

Anas carries a tracking device at all times and employs an external security team that tracks him constantly, often telling him to change locations in the middle of the night. Key to his survival and reporting are measures such as these—ones that seem straight out of Hollywood spy films. But as an individual, he will go outside without a disguise, walk in the city, totally undetected and roams as any other ordinary citizen.

Aside from the lengths Anas takes to protect his identity, he also faces constant litigation for breach of privacy and defamation.“We jokingly say there is no journalist in Ghana who has been sued more than Anas Aremeyaw Anas,” Sammy Darko, a former BBC correspondent who is now a lawyer on Anas’s legal team, said to Ferreira.

Ghana ranks high amongst African countries in the Reporters Without Borders’ World Press Freedom Index. In 2019 Ghana placed 3rd (the U.S. placed 24th), and the country’s laws protect journalists if their reporting serves the public. Anas has never lost a lawsuit, despite his cases even going to the Ghana Supreme Court. 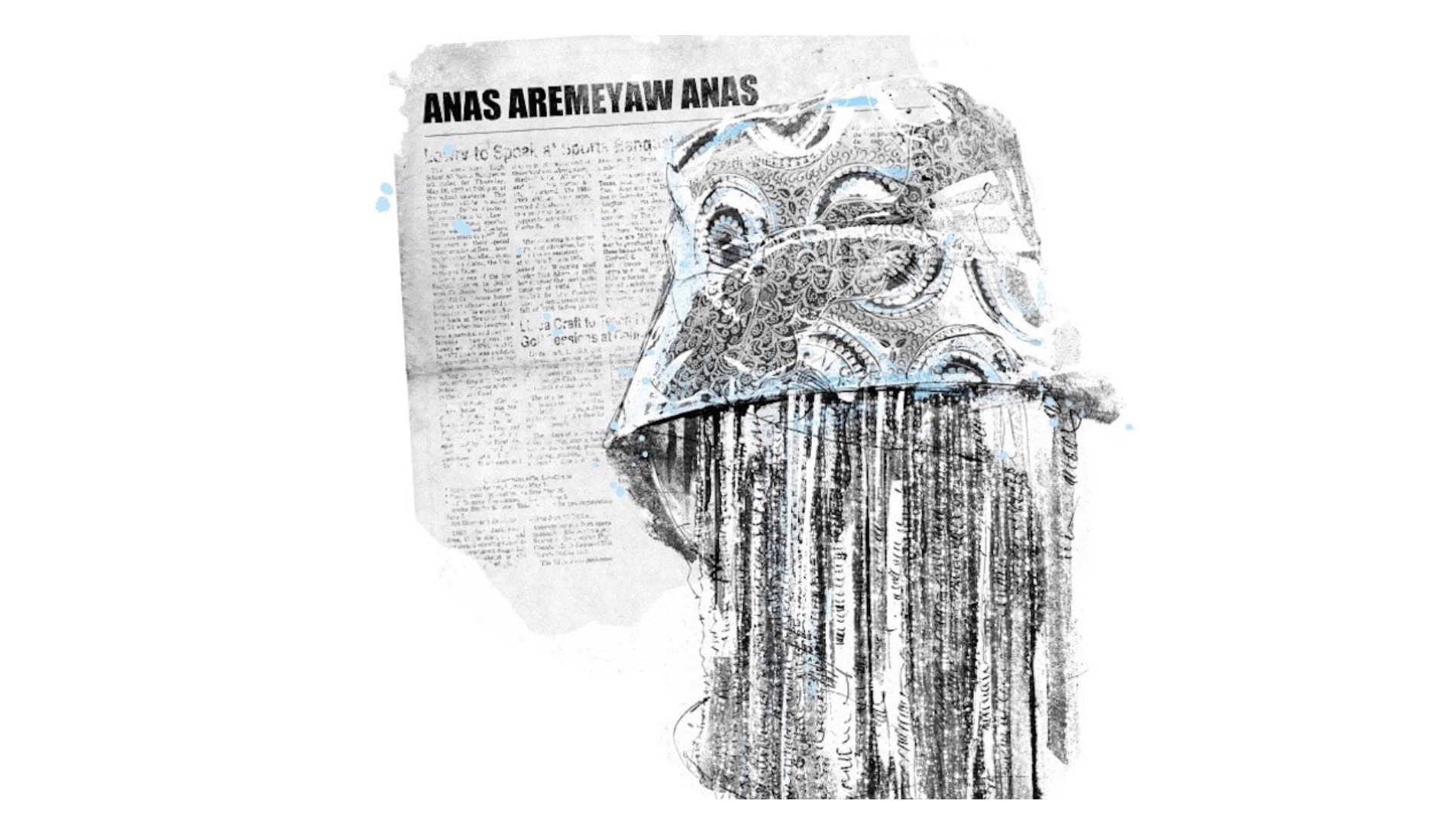 Printed with permission by *iFex [Illustration by Florian Niccole]

Though some may find his methods his extreme, he has nevertheless been the kind of journalist that Hugo de Burgh in his book “Investigative Journalism,” describes as “drawing attention to failures within society’s systems of regulation and to the ways in which those systems can be circumvented by the rich, the powerful and the corrupt.”

That he pushes the ethics of journalism does not outweigh the value of what his reporting brings. Anas’ whistleblowing has a demonstrable impact. His investigations have resulted in not only incarcerations for political corruption and organized crime, but also policymaking: his investigation of an Accra psychiatric hospital paved the way for the 2012 passage of Ghana’s mental health act. The winner of several journalist awards, he works with global media institutions like BBC, CNN, and Al Jazeera and his work has been celebrated by Barack Obama.

His critics may also judge his tactics as flashy, irresponsible and reckless — but he will spend months observing, learning, and conducting research whether to investigate a story — only going undercover when necessary and using hidden cameras as a last resort.

Without the covert gathering of evidence, Anas would not be able to do the reporting that has made him both a community hero and legendary notorious whistleblower. Through his documentaries, Anas has fulfilled the most vital roles of journalism: holding government accountable, exposing corruption, protecting citizens, and preventing the abuse of human rights.

*iFex is an organization dedicated to “promoting and defending freedom of expression as a fundamental human right.” Anas was featured in their Faces of Free Expression campaign.