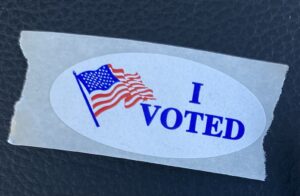 An “I Voted” sticker given out to voters in Suffield, Connecticut. Photo by Kaylee Pugliese.

SUFFIELD, Conn. — New Jersey has become the latest state to legalize recreational marijuana, with 67 percent of the state residents approving the new law, according to the Associated Press.

“We did it, New Jersey,” Garden State Governor Phil Murphy said in a tweet Tuesday. “Public Question #1 to legalize adult-use marijuana passed overwhelmingly tonight, a huge step forward for racial and social justice and our economy.”

Murphy went on to thank an organization called NJ CAN 2020 for “standing on the right side of history.”

New Jersey residents voted on Question 1 on November 3, meaning marijuana use would be legal, taxed at 6.625 percent and regulated for adults over the age of 21. This will take effect on January 1, 2021. Further details and next steps have to be worked out between the legislature and the Cannabis Regulatory Commission.

The biggest supporters of marijuana legalization include Democrats (71 percent), men (66 percent), and those 18 to 34 years of age (77 percent), according to a study by Fairleigh Dickinson University. Women and young adults strongly favor it on the Democratic ticket, and voters intended to vote yes by a 2-1 margin, according to the study.

The legalization in New Jersey could spill over into neighboring states, including New York and Pennsylvania, which could become industry competitors while the new legalization is expected to make the Garden State one of the biggest markets for marijuana in the country, according to a report by the New York Times.