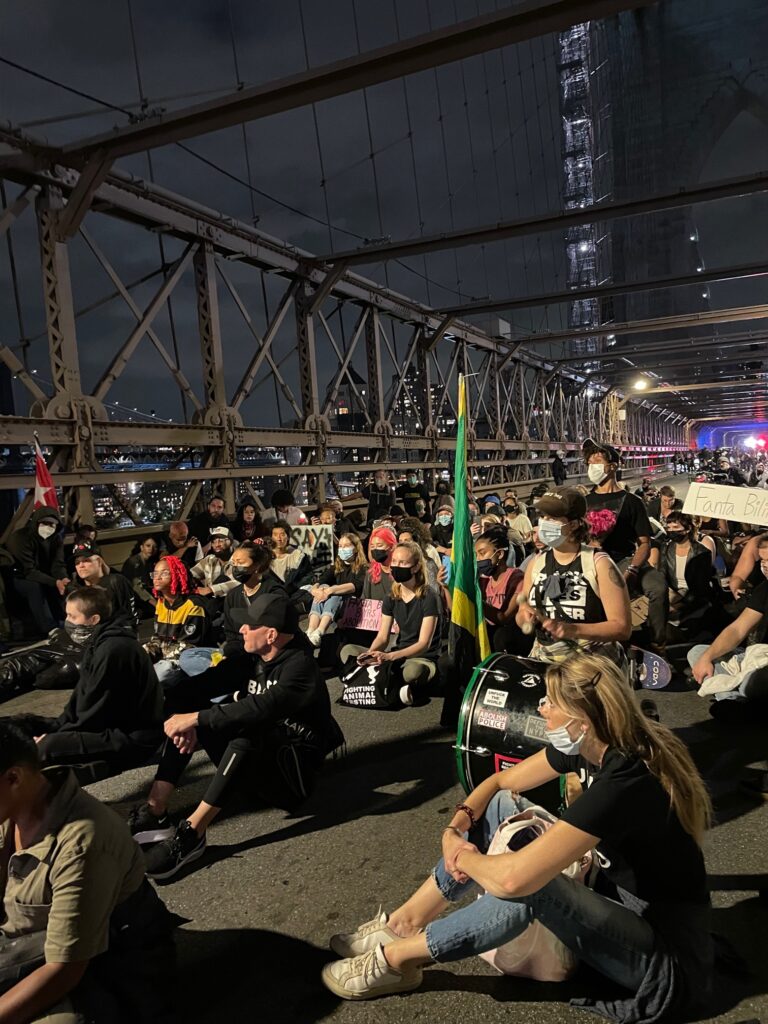 Protestors partake in a sit-in on the Brooklyn Bridge while organizers speak to the crowd. [Credit: Celeste Cox]

(BROOKLYN, NY) — Around 200 people gathered at Barclays Center the evening of Oct. 6 to protest the killing of 8-year-old Fanta Bility by police in Philadelphia over the summer.

Supporters of the Black Lives Matter movement gathered to mourn the death of the young child, which happened on Aug. 27. At a football game in Sharon Hill, PA, police officers opened fire on a vehicle that they mistakenly thought was firing at them. Four people were hit, including 8-year-old Fanta Bility, who was killed. Her 13-year-old sister was injured, according to local news station 6ABC Action News.

“When you want to destroy a race, where do you start?” an organizer was heard telling the Brooklyn crowd. “You start with the children.”

Many expressed sadness and anger that police brutality has continued unchecked, even after George Floyd’s death in 2020, its subsequent protests, and political aftermath. One person held a sign that read “Instead of police we need…” It was covered with sticky notes listing ideas like free healthcare, mutual aid, and universal basic income. 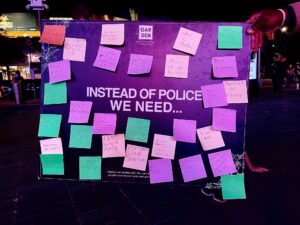 A wall of sticky notes with alternatives to the police. [Credit: Celeste Cox]

The general sentiment of the speakers and the crowd was that revolution is necessary to achieve justice. The event was organized by an abolitionist group called For Our Liberation.

“We all came to the conclusion that we will not be free until we free ourselves, and it moved my heart,” Mansa Mash-Ramani, a self-identified revolutionary, told The Click.

As with others in the march, Mash-Ramani spoke about the importance of martyrdom to the movement, and the personal sacrifices it would take to accomplish real freedom.

“I will die so that my people, and by extension all people, every person that I care about, whether they’re Black or not, will never have to suffer these injustices again,” he said.

The smell of burning sage and smoke drifted through the crowd. Attendees wore shirts reading “Decarcerate. Rehabilitate,” “Stop gun violence,” “Black Lives Matter,” and “Unf*ck the World.” Many people carried signs with Bility’s name and age. They held a two-minute period of silence for her, followed by a candle-lighting ceremony. They then marched down Flatbush Avenue, silent for another eight minutes to honor the eight years of her life. Afterward, members of the crowd held a sit out on the Brooklyn Bridge where more organizers spoke.

The march concluded at the historic African burial ground in downtown Manhattan, where according to the National Park Service 15,000 enslaved and free Africans are buried. Only Black marchers entered the space, while non-Black allies stood guard in case police arrived.