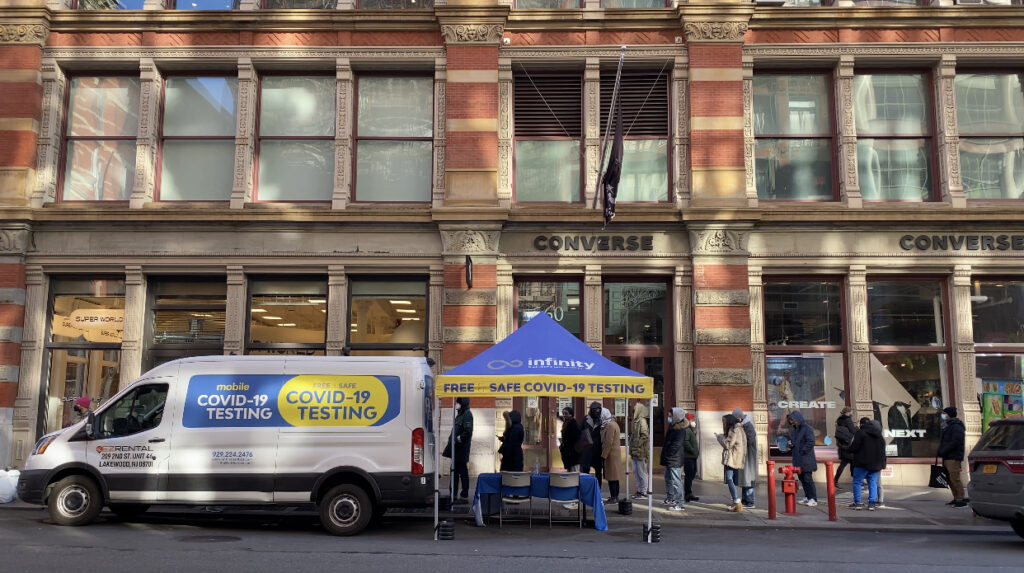 From Soho to Brooklyn and everywhere in between, New Yorkers are facing long wait times for Covid tests and up to 72 hour wait times for results. Lines wrapped around the block at testing vans and urgent cares have shown no signs of letting up, as the Omicron variant sweeps the city.

The Infinity mobile testing van in Soho and the Lab Q van in Greenpoint have had lines around the corner, snaking back several blocks for weeks. The wait time can be as much as four hours and results are taking up to 72 hours.

New York State has set a single-day record for infections six times in about a week. Officials believe a  rise in tourism and the return of large public gatherings have contributed to the fast spread of the new variant.

While debates in the medical community continue about the severity of the new Covid variant, hospitals are filling up again to levels not seen in months. Medical experts believe this could get worse quickly as cases of the Omicron variant which has become prevalent, are spreading faster than past forms of the virus.

The demand for testing has thrown the city into disarray—New Yorkers and tourists alike are scrambling to get their hands on at-home rapid tests causing a shortage in the supply chain. The Biden Administration is working to make testing more easily accessible as the demand spikes. In a speech made on Tuesday, the president said he plans to purchase 500 million at-home tests and distribute them for free to Americans.