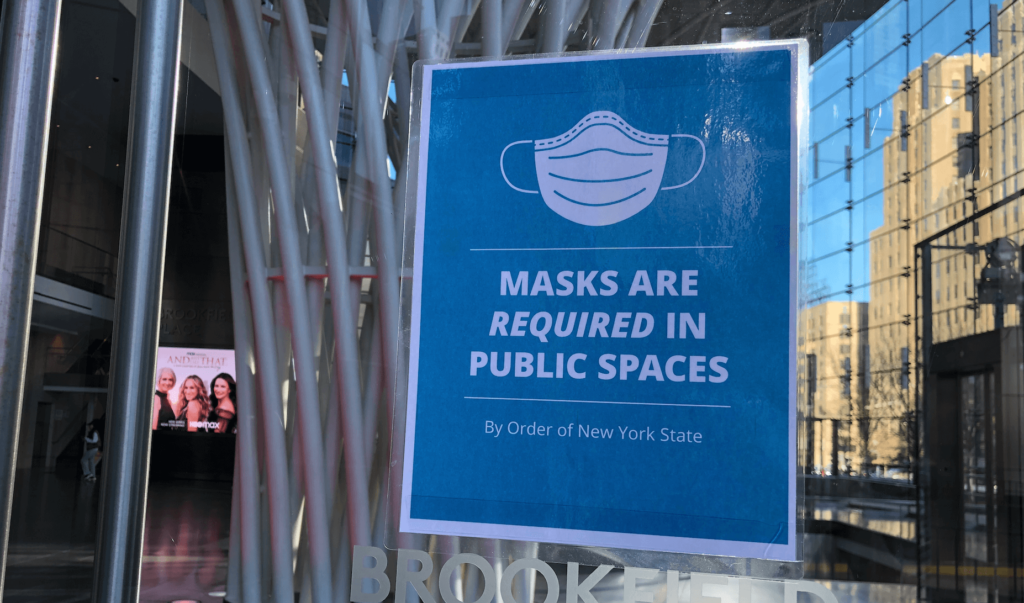 (NEW YORK) — A statewide mask mandate is back in effect in New York as of Monday, December 13. The regulation, imposed by Governor Kathy Hochul, is touted as a preventative step meant to curb the spread of COVID-19 cases this winter after the state experienced a virus spike following Thanksgiving. New York is battling the highly-contagious delta variant while a threat of the mutated omicron variant also looms.

The mask mandate will require all staff and customers to mask up in indoor public spaces that do not check proof of vaccination. It will likely have the most impact on grocery stores, banks, and retail spaces, including malls and local shops looking to attract customers this holiday season. “I think it’s difficult to undergo all of these precautions but if it’s the smartest and safest way and everyone is just trying to figure it out, we just kind of have to accept that those things aren’t going to be fun but they’re a lot more fun than getting people sick,” said Bella Gerard, a Manhattan resident.

California is enforcing a similar mask mandate as cases tick up. The often cited John’s Hopkins University COVID tracker shows the U.S. has reached a grim 50 million total cases since the start of the pandemic.

Wearing a mask has been mandatory on New York public transit, including subways, buses, and trains, since early on in the pandemic. And recently, restaurants, fitness centers, entertainment venues, and meeting spaces were ordered to check proof of vaccinations, including those for children age five and up.

Testing is ramping up too. There are lines at New York’s free pop-up COVID-19 testing clinics that administer rapid nasal swabs and PCR saliva tests. The plan to make at-home tests more widely available is also coming into play as pharmacies work to keep their shelves stocked with the rapid testing kits.

A local woman in the East Village said, “I’ve been to three stores today, and they’re all sold out, they just told me they’ll get it tomorrow. So it seems like everyone’s doing what I’m doing and trying to get tested for the holiday parties or for going home.”

As New Yorkers head into the holiday season, the rapid at-home tests are a valuable tool for preventing infection and providing peace of mind. As for the mask mandate, it’ll be reassessed again on January 15, after officials have had time to examine the effects of the season’s increased travel and indoor get-togethers.