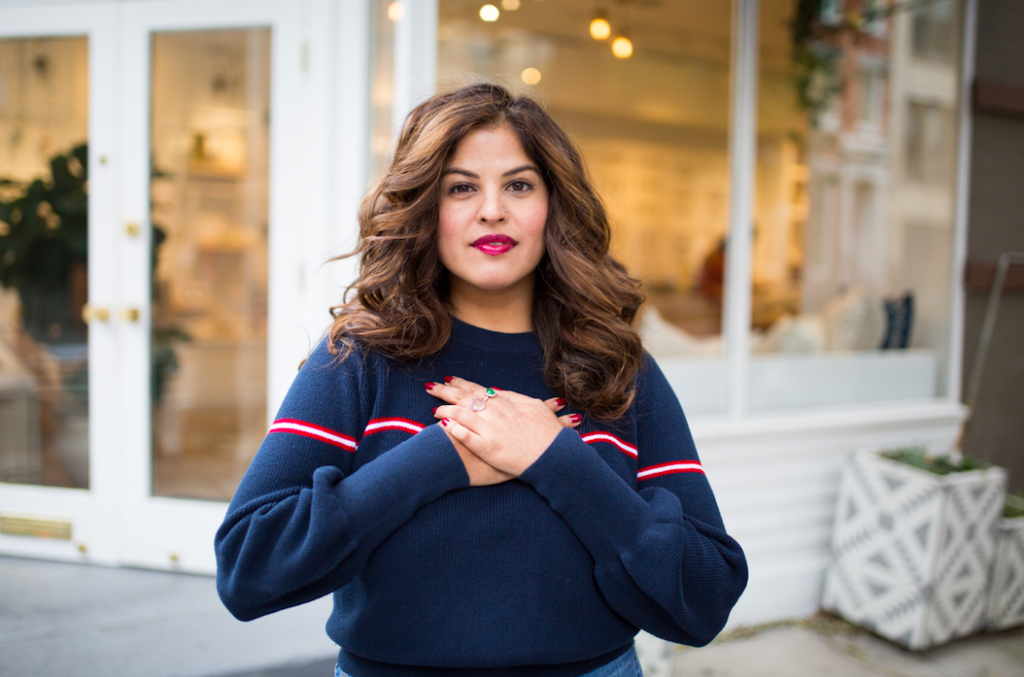 (MORGANVILLE, N.J.) — At 40, Nitika Chopra is embracing parts of herself she once wished away. Before founding Chronicon, a platform dedicated to elevating the lives of people with chronic illnesses, Chopra understood how isolating having an illness can be. Diagnosed with psoriasis and psoriatic arthritis in her teens, she hid her symptoms from peers. “I wasn’t encouraged to be myself,” she tells me from her sunlit kitchen in Williamsburg, Brooklyn over Zoom. “But I didn’t have the language at the time to communicate that.”

Chopra launched Chronicon in 2019, selling out her first event in New York with over 2,000 attendees and notable guest speakers like actress Jennifer Esposito. The response led Chopra to take the in-person experience online to connect people across the world. But perhaps less intentional is the role Chopra plays as a model for South Asian Americans to discuss culturally taboo topics, like illness and mental health.

While South Asian changemakers like activist/performer Alok Menon, Chopra and others are revolutionizing dialogue around illness, the older generation has a long way to go towards acceptance. Many first-generation South Asian Americans like me weren’t necessarily encouraged to become artists or explore their creative interests as careers. Stable careers in medicine or law were valued over non-traditional paths in the arts. Money equaled success, and successful people didn’t talk about their feelings. For South Asian Americans, the pressure was on: if we failed, the entire community was watching.

Chopra didn’t meet traditional beauty standards either when it came to the size of her body and curly hair. “I’ve either had to fit into a sea of white people or a sea of Indian people who look nothing like me,” she says. Chopra’s will to own her otherness forced her to look elsewhere for support and into a career as a chronic illness advocate.

The CDC estimates that 6 in 10 adult Americans live with chronic illnesses ranging from celiac disease and other autoimmune conditions to diabetes and cancer. Yet the U.S. healthcare system does little to acknowledge chronic illness. Alternative therapies like acupuncture and massage can offer people living with chronic illness relief but are rarely covered by insurance.

With Chronicon, Chopra believed in the power of collective healing. Emily Pumm, who became a Chronicon member in 2020, describes the community as a “safe haven.” Weekly discourse and events like dance therapy and restorative yoga give members a chance to relate to one another on interests outside of illness. Inequalities in healthcare also make it difficult for marginalized communities like South Asian Americans to get the care they need. “There is so much shame embedded in our culture,” Chopra says when reflecting on her divorce in her twenties. “It’s like I wore a scarlet letter when in reality it was a fear of what other people are going to think.”

Studies suggest there’s a personal stigma amongst South Asian Americans in discussing mental and physical health challenges — 1 in 5 deal with mental or emotional stress. Clinical psychologist Dr. Jynothsna Bhat notes that South Asian Americans are the least likely to seek out mental health resources and therapy. “Many first-generation youths even co-opt their parents’ traditional views of mental health, despite the fact that these issues have begun to be more accepted and better understood by the average Americans,” Bhat wrote in a blog post about mental illness.

By using experiences and interests from her life, Chopra is helping to change what living with a chronic illness looks like to an ableist world. As a member of the Resistance Revival Chorus, she found music to be a powerful tool to cope with her symptoms and flare-ups. On her podcast, “Point of Pain,” guests discuss mental and physical health challenges that come with living with an illness. Chopra commissioned three musicians to write and record the introductory song for the podcast.

“We wrote the song with the intention to allow people dealing with illness to face what they’re going through with grace and love,” explains singer-songwriter Geminelle Rollins Malone. Although she doesn’t have a chronic illness, Malone recognizes how music can subconsciously change our mind’s internal programming. “Let it in, surrender,” Malone sings, reminding listeners that acceptance is grace.

As Chopra expands her career — she recently signed with Natural Models LA — she believes that by speaking our truths as South Asian Americans, the older generation will come around. “I try to lead by example and compassion to show people they can do it, too,” she states.

Chopra envisions a future where the wellness industry will recognize people living with chronic illnesses in the same way the fashion industry has benefited from including plus-sized clothing and models into their brands and runways. In a world where isolation is at an all-time high, communities like Chronicon can offer people with chronic illnesses a chance to feel connected to the world around them.