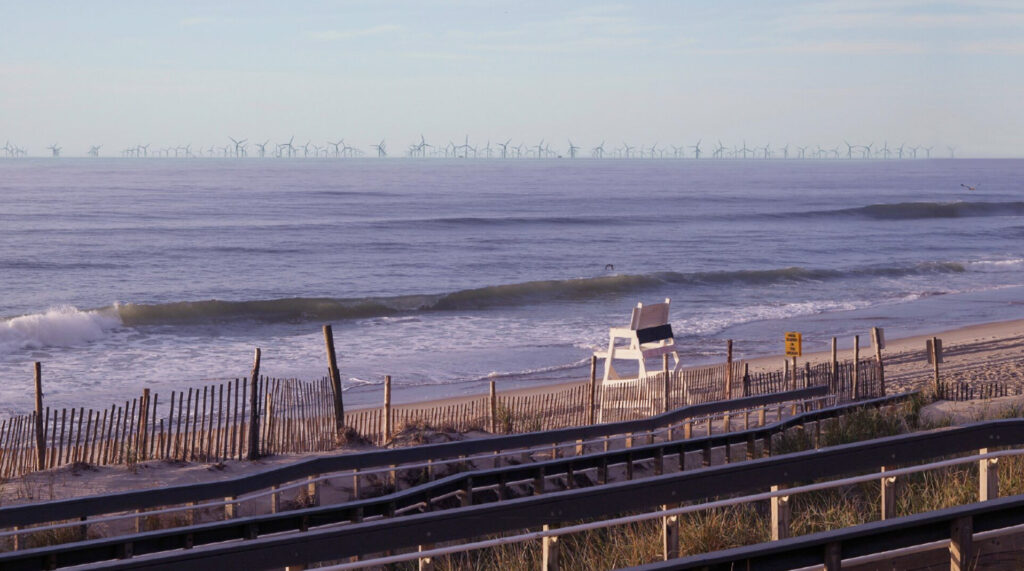 Artist rendering of the potential view of the offshore wind project from Beach Haven, New Jersey. Photo Credit: Save L.B.I.

(Long Beach Island, N.J.) – The path to clean and sustainable energy in New Jersey is no longer a thing of the past — it is the present and the future.

New Jersey entered a 30-year lease agreement in 2017 with Atlantic Shore Offshore Wind, a 50/50 partnership between Shell New Energies U.S., LLC. and E.D.F. Renewables North America. Together, they plan to develop the nation’s third-largest offshore wind farm in the Mid-Atlantic Bight, up to 20 miles off New Jersey’s coast and between Long Beach Island and Atlantic City.

With a court decision looming and the potential for more lawsuits, Atlantic Shore Offshore Wind continues to pave the way to a clean and sustainable future. Their promise to bring renewable energy also includes plans to rebuild infrastructure, workforce development training programs, and enrichment opportunities for individuals in the Atlantic City area.

“We are not opposed to wind turbines, just not here. Move them out 35 miles. As a group, move them out offshore,” said Bob Stern, a resident of Long Beach Island and organizer of Save Long Beach Island, Inc. (Save L.B.I.), a nonprofit coalition of individuals against the project’s location.

Stern, a retired engineer who previously managed the U.S. Department of Energy Office, filed a lawsuit with Save L.B.I. against the U.S. Department of Interior (DOI) and the Bureau of Ocean Energy Management’s (BOEM) in January. The lawsuit’s goal is to attempt to overturn the decision allowing wind turbines to be constructed in the Mid-Atlantic Bight.

According to court documents, the decision for the final wind energy areas is capricious and not in accordance with the law. By not addressing the cumulative impact of wind energy and conducting a regional environmental impact statement, the public cannot critique or offer alternatives to the project. 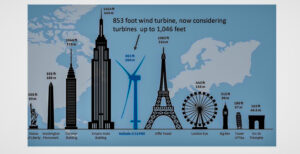 The Vesta V236-15MWtm offshore wind turbine will stand at 857 feet tall, nearly the size of the Eiffel Tower. Photo Credit Save L.B.I.

“The selection was not made properly. There was no environmental impact statement provided. Therefore, the public could not weigh in on this,” Stern said.

The lawsuit claims BOEM has not prepared any document that will adequately address the impacts of wind energy development within the lease areas, a requirement of the National Environmental Policy Act (NEPA) and the Endangered Species Act (ESA).

“There are 357 wind turbines the size of the Eiffel Tower that will be built along the coast of Long Beach Island. These turbines are the largest and closest of any current project worldwide. The visibility of these turbines from land will ruin local tourism, destroy our economy, and reduce property value,” Stern said.

According to a survey conducted by the University of Delaware, the development of wind turbines may lead to a decline in revenue and the loss of 1,100 tourism-related jobs in the recreation and hospitality industry. 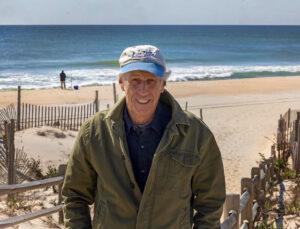 “Our local economy is driven by tourism – 71% of the people said they favor the turbines to be constructed where they cannot be seen,” Stern said, referring to the University of Delaware survey results.

“This project sits in the middle of a migration route for the North Atlantic right whale – a critically endangered species. The construction of the wind turbines, vessel traffic, destruction of the seafloor, and overall noise pollution will be detrimental to the Right Whale’s survival,” Stern said.

The project, however, comes in a time of need as the climate around the world is changing rapidly. By burning fossil fuels and other natural causes, we have contributed to an increase in carbon dioxide (CO2) levels by nearly 50%, according to NASA. Together, global and ocean surface temperatures have been linked to the retreating of glaciers, a 70% decrease in animal populations over the last 50 years, and extreme weather patterns and events.

“We cannot continue to do nothing. That hasn’t worked,” said Captain Kevin Wark, a third-generation commercial fisherman in Barnegat Light.

Over the past few decades, he has witnessed firsthand the impact climate change has had on the local fishing industry. “Shellfish impact, such as clams and oysters, have been damaged. Sea trout, weakfish, and mackerel were available locally; now they are gone. We can still fish, but environmental stressors have impacted what is available,” Wark said. 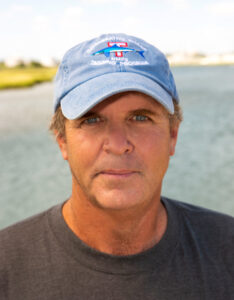 With plans to begin the project within a year, Stern continues to press his argument to move the wind turbines further offshore. He has presented a more desirable location in the Hudson South area that is 32 miles off Long Beach Island. This site has already been designated to meet offshore energy goals and may limit the environmental and economic impact.

“This site is the best option for Long Beach Island and New Jersey. New Jersey Board of Public Utilities and Governor [Phil] Murphy’s staff have been made aware of this plan, as well the exceptionally visible impacts and the other unique adverse impacts of the close-in Atlantic Shores Project,” Stern said.

However, during WNYC’s “Ask Governor Murphy” radio program on Sept. 27, Murphy said, “The wind turbines will be visible. I think it’s getting used to a different set of visuals on the horizon.”

Though the project has created tension amongst New Jersey residents, others benefit from the opportunities that have presented themselves.

Atlantic Shore Offshore Wind’s Chief Executive Officer, Joris Veldhoven, said in a 2021 virtual presentation, “We are thrilled to be moving forward with our project and cementing our commitment to deliver clean, renewable power and well-paid jobs to the Garden State for years to come.”

“Our robust project includes several essential initiatives to train local workers and bring manufacturing jobs to the state that will ensure New Jersey workers and the local economy reap the benefits,” Veldhoven said about the potential impacts on workforce development.

In 2020, Rutgers, the State University of New Jersey, earned a five-year grant from Atlantic Shores. The $45,000 annual grant is used to hire staff, develop a curriculum, and provide supplies for a two-week summer program for ninth-grade students. Students can learn about renewable energy and wind turbine technology and conduct scientific experiments there. 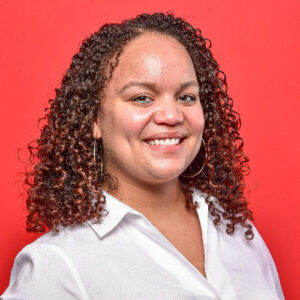 Candidates of the summer program are enrolled in Rutgers Future Scholars, which offers 200 first-generation, impoverished middle school students an opportunity to experience university programs, events, support, and mentoring throughout high school and college. Participants of the program are encouraged to attend workshops and mentoring sessions, team-building seminars, and enrichment courses for college credit.

After two years of planning, the Student and Community Affairs Coordinator assisted with implementing an eight–day enrichment program during the summer. The curriculum is created and taught by Roy Montalvo, a professor at Rutgers University Department of Physics and Astronomy.

“The goal is to gear students towards renewable energy – make it fun, cool, and interesting. Students were able to build their wind turbines and bring them home, and they learned about how they work and collect energy,” Pryor said, adding, “They also blew up things. The kids had a wonderful time.”

While Pryor had a front-row seat to the explosion, students learned a great deal about climate change and renewable energy.

“I really enjoyed this class. We learned about how energy is produced, anthropogenic climate change, and wind turbines. We learned all about the ways we can save our planet if we change different energy sources. It was also cool because we had a chance to see our professor blow things up,” a student responded in an anonymous survey by Pryor.

While the grant is in its infancy, Pryor plans to offer an additional summer course and projects throughout the school year.

“Renewable energy is a growing field, and we hope this partnership with Atlantic Shores will lead to training and jobs for our students or even their family members,” Pryor said. 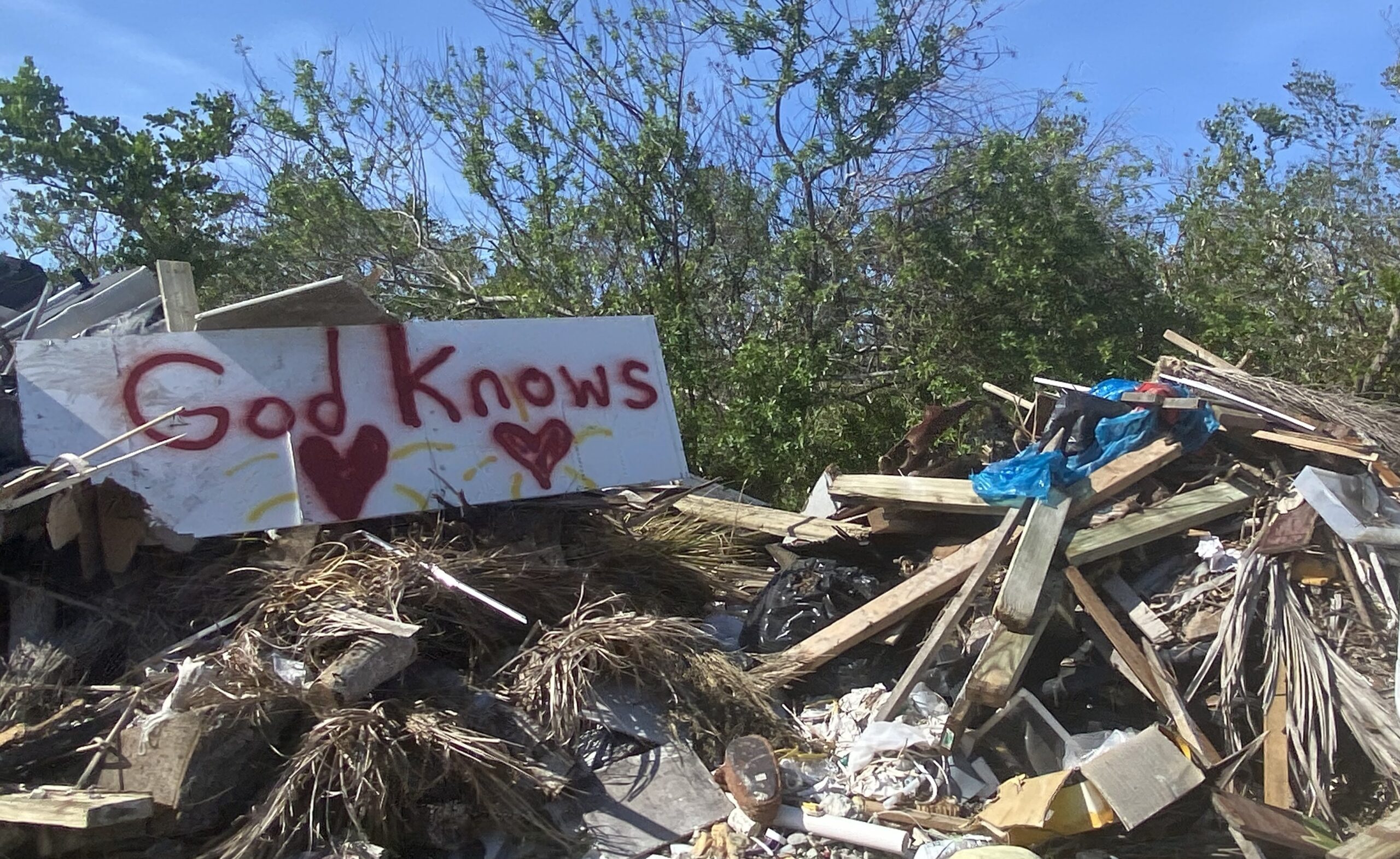