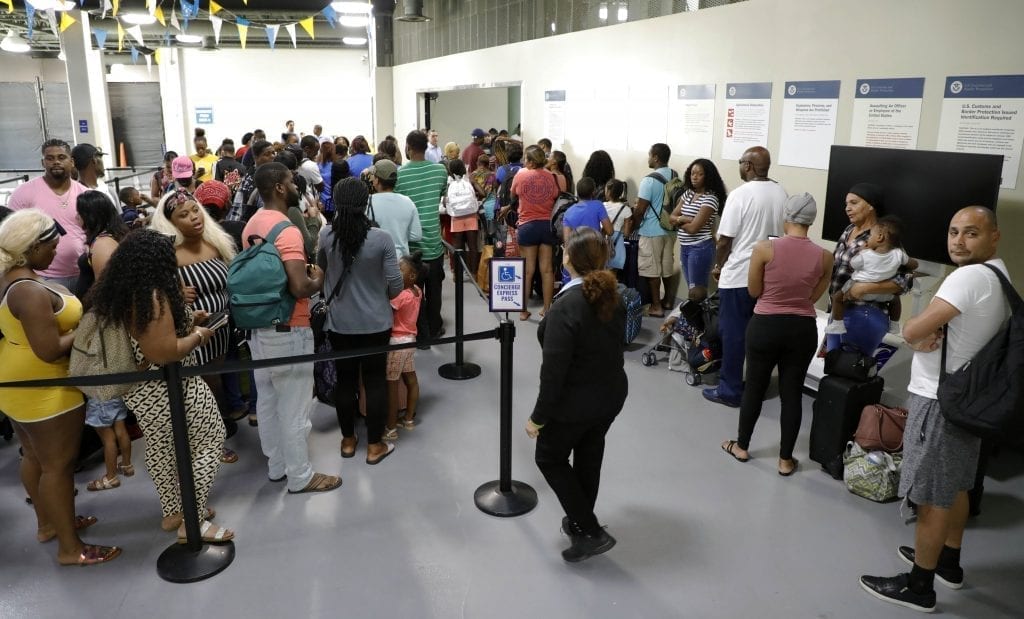 U.S. Customs and Border Protection continues to support rescue and recovery efforts in the Bahamas following the devastating impact of Hurricane Dorian. CBP is working with the Bahamas Paradise Cruise Line and is prepared to process the arrivals of passengers evacuating from the Bahamas according to established policy and procedures, in the Port of Palm Beach, Fla., Sept. 7 2019. CBP photo by Jaime Rodriguez Sr.

No Visa? No Entry for Bahamian Storm Evacuees

NASSAU, Bahamas – Nearly two weeks after Hurricane Dorian ripped through the islands of Abaco and Grand Bahama in the northernmost part of The Bahamas, survivors seeking asylum in the United States are being denied entry amid confusion over required travel documents.

On September 9, scores of hurricane evacuees boarded a ferry in Grand Bahama that was bound for Fort Lauderdale, Fla. According to CNN and The Washington Post, upon arrival, over 100 passengers were ordered by the ferry’s operator to leave the ship if they did not have U.S. visa.

“Please, all passengers that don’t have a U.S. visa, please proceed to disembark,” said a crew member in a video that was captured by WSVN reporter Brian Entin and posted to Entin’s Twitter page.

Passengers were disgruntled and confused as Bahamians are not required to have a visa to enter the U.S., specifically South Florida, due to the “historically deep ties with The Bahamas”, according to a statement made by Sen. Marco Rubio (R-FL). A valid, unexpired passport and “a police certificate issued within the past six months” are permissible documents, according to U.S. Department of Homeland Security. Sens. Rubio and Rick Scott (R-FL), wrote a plea to the Trump administration asking that visa requirements be waived for Hurricane Dorian survivors seeking entry into the U.S., as reported in The Tribune Newspaper.

President Trump, however, viewed the matter much differently, saying, “[E]verybody needs totally proper documentation because The Bahamas had some tremendous problems with people going to The Bahamas that weren’t supposed to be there,” said President Trump, according to NBC News.

The island of Abaco, which was completely obliterated by Hurricane Dorian, is home to shantytowns, “The Mudd” and “Pigeon Peas”, that are predominantly inhabited by undocumented Haitian nationals; many of whom were killed by Dorian’s surge.
Trump’s comments came after the U.S. Customs and Border Protection (CBP) blamed the ferry’s operator for failing to retrieve accurate travel and immigration information from both the U.S. and Bahamian governments before making their announcement, according to The Washington Post.

However, Sen. Rubio stressed the good practices of Bahamian citizens when traveling to the U.S.

“Some useful facts for those who don’t follow The Bahamas,” tweeted Senator Rubio Monday. “Unlawful immigration by Bahamians is very rare. Unlawful immigration into The Bahamas has been a problem for them. U.S. and Bahamian governments have an exceptionally close and long-standing working relationship,” reported The Nassau Guardian.