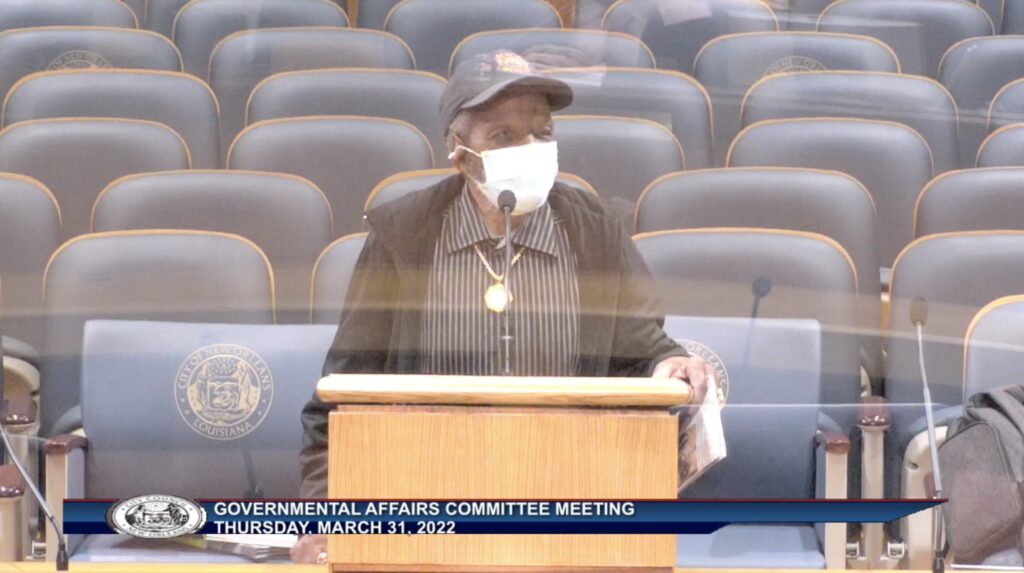 A constituent shares his personal experience with SWBNO overcharges, voices concerns about Mayor Cantrell’s position as Board President of SWBNO. [Credit: Tess Riley]

(NEW ORLEANS) – The Governmental Affairs Committee of the New Orleans City Council voted in support of a resolution on March 31 that would lead to increased oversight of New Orleans’ Sewage and Water Board (SWBNO). The board has faced criticism for many years regarding overcharged bills and a lack of options or transparency in resolving them.

The resolution supports HB652, a Louisiana bill sponsored by Rep. Stephanie Hilferty, to make the SWBNO subject to regulation as a public utility.

Jean Paul “JP” Morrell, chair of the governmental affairs committee, said that many members of the public assume that SWBNO is overseen by New Orleans City Council, leading council members to field a large volume of complaints from constituents about billing and infrastructure issues. SWBNO is a state entity with a board appointed by the mayor and is regulated by the State of Louisiana. Therefore, only the Louisiana legislature can investigate SWBNO complaints, not city council.

Morrell described SWBNO as a “troubled entity” with “significant credibility issues” that have lasted through multiple administrations. He cited “ridiculously wrong bills” that can only be adjudicated by SWBNO administrators, which means the odds are stacked against customers who present these SWBNO employees with their incorrect bills. The approved resolution would grant greater authority to New Orleans City Council to intervene in these overcharge disputes, allowing for the possibility of appeals and amnesty periods that would help constituents resolve billing issues.

A  comment virtually submitted by New Orleans resident Oliver Fletcher, deemed the resolution problematic due to its ties to Rep. Hilferty. Fletcher said that there were eight Democrats who could have carried HB652, and expressed frustration with Rep. Hilferty, who is a Republican, for her role in overriding Gov. John Bel Edwards’s veto of a congressional redistricting bill. The overriding of the veto essentially means that Black voters will not have the possibility of electing a second African American to Congress.

Another constituent, referred to as Mr. Morgan, provided his comment in person before the committee. Morgan cited personal experience with SWBNO overcharges, and said that he does not trust Mayor LaToya Cantrell, who serves as president of the SWBNO Board. He said that he believes projects she signed off on should have been brought to city council instead.

“She sold the people out,” Morgan said, before urging councilmembers to “stand for the people, the people that put you in office.”

Mayor Cantrell opposes HB652 and recently lobbied against its passage. According to WWLTV, Cantrell said the bill does not increase accountability for the SWBNO, it only increases “bureaucratic red tape” and called the bill an “untimely distraction.”