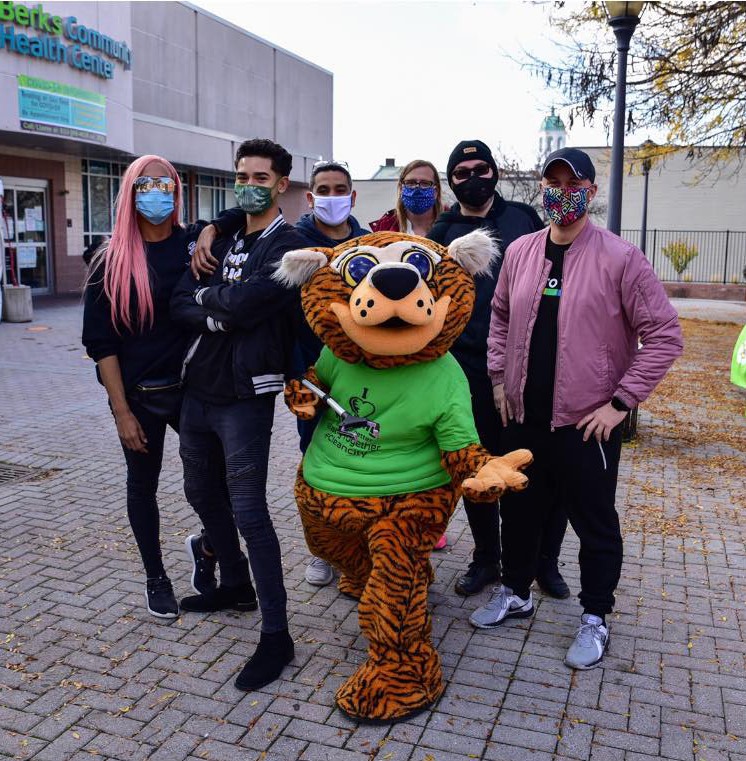 (READING, Pa.) — November 14 was a beautiful day in downtown Reading, but instead of taking a bike ride or a stroll, dozens of people—masked, of course—gathered in front of the Family Dollar store on Penn St. to pick up garbage as part of One Love Project’s Turkey Bowl cleanup.

Adults of all ages, races, and genders chatted and greeted friends and acquaintances while waiting for the work to begin. Music played from large speakers and the excitement of reuniting with people not seen in several months was palpable. The mass of colorful sweatshirts, coats, hoodies, and hats seemed to reflect the bright mood of the crowd.

Timothy Nye, the event’s organizer, explained that they named the cleanup event after the old tradition of playing football on Thanksgiving, nicknamed a “turkey bowl.” It was promoted as a cleanup—but the efforts of collaborating groups transformed it into an outreach event. Volunteers from The LGBT Center of Greater Reading, The Humane Society of Berks County, and Reading Pride Celebration were there in support. Several tables held hot food, hygiene packs, blankets, and other necessities for the local people experiencing homelessness. Information about health and housing resources were available. This collective effort  epitomizes One Love Project’s mission: to “collaborate with other organizations in the community to bring individuals of all backgrounds together while providing resources to those suffering.”

“We want to be there emotionally, for material things, anything at all that anybody in this pandemic needs,” said Nye.

Nye and his friend, Angel Gonzalez, co-founded the One Love Project in July. The newly formed organization hosted its first event in August, a food drive focused on people whose income was affected by the pandemic. Gonzalez and Nye have submitted the application for 501(c)(3) nonprofit status to the IRS and are awaiting its approval.

“We see so many people throughout the city that are struggling and cannot even get paid because they lost their jobs,” Nye said. “While we were planning the food drive, we would go shopping and see a family of five sitting on the corner of the road holding up signs saying, ‘Our family has lost their job. We need help.’ And that hits home for me.”

This was the fourth cleanup event One Love Project has sponsored.

The 2010 Census revealed a poverty rate of 41.3% and gave Reading the distinction of being the poorest city in America in 2011. The city’s poverty rate dropped to 35.4% in 2018, according to a 5-year review by American Community Survey, a branch of the U.S. Census Bureau.

But in its heyday, Reading was a thriving industrial hub. From the late 19th to the mid-20th century, its proximity to the Schuylkill River, installment of railroads such as the Philadelphia and Reading Railroad, and naturally abundant iron ore powered steel and textile factories that supported the city and its families.

The Reading Railroad was sold in 1971, reflecting a decline in coal reserves. In 1974, Reading branded itself the “outlet capital of the world” because of the numerous factory outlets selling their minimally damaged or excess products at deep discounts. Out-of-state buses clogged the city traffic on weekends, packed with shoppers on the hunt for a great deal.

Twenty years later, textiles and other industries moved to international locations as NAFTA hammered the final nail in the manufacturing coffin. Factories closed and well-paying jobs became scarce. Now, the outlet era has also ended as the city’s Vanity Fair Factory Outlets, once housing dozens of stores in the buildings of the former Berkshire Knitting Mills, have been redeveloped to commercial space. In 2009, the state declared Reading a financially distressed municipality under Act 47, which allows restructuring of debt under state supervision.

The Turkey Bowl volunteers got to work at about 11:30 a.m. One Love’s volunteer coordinator, Joann Sosa, handed out maps and assigned specific areas to each volunteer group. Armed with bags and trash pickers, people dispersed to tackle their designated area of the 800 block, picking up stray garbage. Other people grabbed a broom and started sweeping the immediate area, forming half a dozen piles of leaves.

About 40 feet from the Turkey Bowl’s setup, there was another table holding a large pot. Oscar Melendez, who was doling out oatmeal from the pot, said that he had not known about the cleanup but is there every Saturday with other volunteers to provide food for the homeless. Melendez does this because of the fellowship of his church, Movement of Faith. He described the ministry as “haciendo la diferencia”—making a difference.

“I don’t want to be famous,” he said. “‘You see me hungry, you feed me.’ That’s the word of God. I’m doing it for love, because I know there are people in need.”

A car suddenly pulled up to the curb and parked. A tall man got out of the car, opened his trunk, and began shouting, “Free food! Free food!”

Melendez recognized the man as someone who also brings food every Saturday.

“God sent me to give,” said Dare Owoloja, a member of the Redeemed Christian Church of God. His car’s trunk held boxes full of baked goods that were near the expiration date. Owoloja said he collects these items from stores like Wegman’s and brings them here to distribute.

The Reading Redevelopment Authority owns the property that served as the base for the cleanup, and they are encouraging organizations to hold activities here in the future. Ernest Schlegel, Board Chairman of the organization, said that people who are on the margins of society congregate here, and the Redevelopment Authority wants to improve the area and provide a sense of inclusion for them.

Each of the long concrete planters in front of the Family Dollar has in-ground lights that currently don’t work. Schlegel intends to have these fixed or line all of the trees with lights to make the area brighter. Plans for next year include utilizing these concrete containers to beautify this part of the city with plantings and mulch.

During the summer, a farmer’s market was held once a week in this space before it moved further down Penn St. Schlegel said that the Redevelopment Authority is considering moving the market around.

“There’s a good network of people who utilize that market,” he said. “It’s a walk-to market and it’s important for people who don’t have transportation or have limited resources. They can use their EBT cards and food vouchers.”

The city’s first Latino mayor, Eddie Moran, was present at the cleanup, posing for pictures with volunteers and thanking them for their efforts. Mayor Moran took office in January and under his leadership, the city is striving to reach its full potential. Also present was Manuel Guzman, newly elected House Representative for District 127, which serves Reading and part of southern Berks County.

The Mayor’s administration is working with the stakeholders on this block as well as the Redevelopment Authority, the Council on Chemical Abuse, Berks Coalition to End Homelessness, and the Public Works department to be present and offer assistance to those who want it.

“It’s many organizations coming together to address the city’s core,” Schlegel said.

As the late afternoon sun cast long shadows on the buildings along Penn St., volunteers sporadically returned to the area in front of the Family Dollar store. In one cleanup area, the stacked orange and brown bags holding litter and leaves stood 4 feet high and 5 feet wide. In total, 45 bags of garbage were collected.

One Love Project’s last event of 2020 was a food drive to provide a Christmas meal and toys to families in need. The group collected items for three weeks and on Saturday, December 19, members and volunteers met at The Gables at Stirling Guest Hotel for the drive-through event. People who drove up to receive the donated items did not have to leave their car; masked volunteers placed the boxed items in their trunks. At the end of the event, 100 families had received boxes containing enough items to prepare three meals for a family of six, which included turkeys, hams, bread, cereal, tuna, peanut butter, microwaveable meals, soups, pasta and sauce, rice, desserts, and fruits. All monetary donations were used to ensure that each box had enough food for three meals.

After the food drive, the One Love Project members gathered even more food that they donated to an additional 12 local families.

One Love Project has accomplished much in their first six months of operation, and while their first few events of the new year will be socially distanced because of the pandemic, they have no intention of taking a break. Their agenda includes podcast events and locating more families in need of food, said Nye. In March, they will partner with the LGBT Center of Greater Reading for a large-scale clothing drive.

In a few months, the warm breezes of spring will push debris into the streets and around the city’s shrubs and buildings. People will still need jobs, food, and assistance. One Love Project will rise to meet this need, empowering Reading residents to come together, beautify their city, and open their hearts.