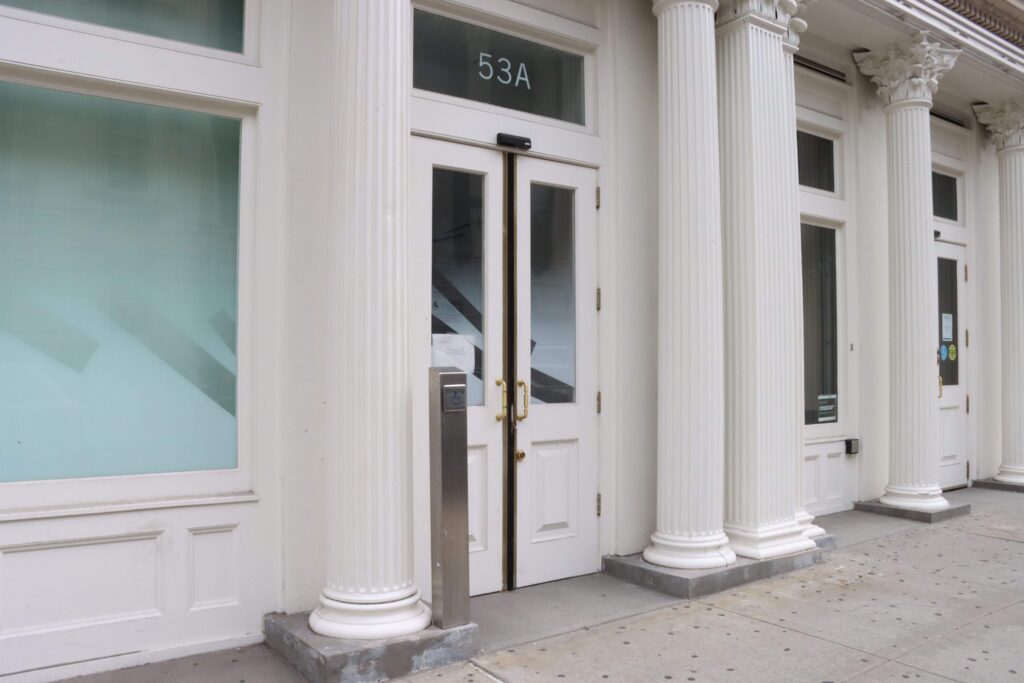 The doors of Gibney Dance Center in Lower Manhattan have been closed for 6 months. [Credit: Sarah Parker]

The doors of Gibney Dance Center in Lower Manhattan have been closed for 6 months. [Credit: Sarah Parker]

(NEW YORK)— Six months into a coronavirus shutdown, Gibney Dance Center has no clarity on when it can reopen.

Gibney, a nonprofit with locations in Flatiron and Lower Manhattan, is one of over 35 professional dance studios in New York City. On March 16, it was ordered to close along with all other fitness centers. But now, as many gyms have returned with safety precautions in place, Gibney remains shuttered.

Jenny Thompson, Senior Director of Development and Revenue Strategies at Gibney, is beyond frustrated. “We have a 40-page plan in place ready to go,” she said. “But we’re hearing stories of studios getting shut down and being reported by other members of the dance community… clearly, it’s not going well. There’s no rhyme or reason to any of it.”

According to ny.gov, recently added Phase 4 reopenings include “gyms and fitness centers” and “low-risk indoor arts and entertainment.” More specifically, when the business code identifying “Fine Arts Schools” is searched on this website, it deems them “permitted to operate with restrictions.”

But Mayor Bill De Blasio said the city’s priority is reopening schools and child-care centers. At his August 24 press conference, when asked about a timeline for the dance industry, he said “we don’t have a sharp, clear line yet… we’ll look at [it] again.”

This conflicting information leaves dance studios wondering where they fit in. Owners are getting shut-down orders as they try to reopen, even while strictly following all safety guidelines.

Gibney, founded in 1991 by Gina Gibney, rents space to artists, holds over 75 open classes a week, and hosts performances in their 116-seat black box theater. They’ve been diligently working to get everything prepared in hopes of recovering after the extended lock down. The facilities team is even working with an outside reopening consultant to get their strategies approved by medical experts. “The fact that we’re still closed has decimated our entire earned income stream. At this point we’re only operating off of fundraising,” said Ms. Thompson.

Some studios, like PMT House of Dance, are fighting back by organizing calls to action. Others, like Gibney, are holding out until they get a clearer reopening mandate.

“Our space is ready- floor markers, thermometers, hand sanitizer, scattered hours, new HVAC and intake/outtake fans, taped off 6-foot squares, limited studio capacities- it’s ready to go in terms of the guidelines that exist for everybody else. But who knows? For now, we’re just hanging out in limbo.”