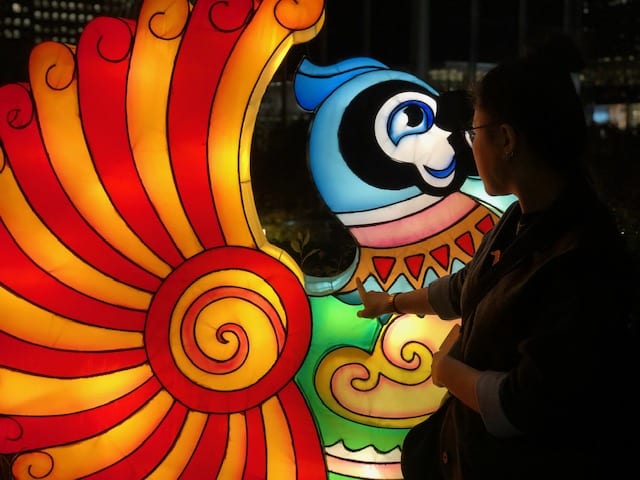 Gao connects with her zodiac animal. Image by Lindsay Rogers.

NEW YORK — The 12 zodiac animals of the lunar calendar were lit on October 28, the first night of the NYC Winter Lantern Pop-Up Festival in Liberty Park in anticipation of the upcoming Winter Lantern Festival.

The Winter Lantern Festival made its NYC debut in 2018, at the Snug Harbor Cultural Center and Botanical Garden on Staten Island, and saw upwards of 60,000 visitors in one month’s time.
The festival itself is a nod to Chinese culture. “The displaying of lanterns is a traditional way of celebrating important holidays in China,” General Li, the cultural counselor of the Chinese Consulate, told Staten Island Live. “In order to pray for harvest, families light up lanterns in joy and appreciate their wishes. This often contains a message of good fortune.” Whereas fire was traditionally used in the lighting of the lanterns, the festival utilizes LED lights for safety purposes.

“The zodiac animals are part of the Chinese identity,” said Jia Gao, 26, who had no prior knowledge of the festival, and stumbled across the Liberty Park pop-up by chance on her way home from work. “It’s nice to feel represented.”

All of the zodiac animals represent a year, meaning the calendar resets every twelve years. Gao, who lives in Harlem but is originally from China, was born in the year of the rooster, which she likens to a horoscope. Similarly to horoscopes, some of the animals are notably more compatible than others.

“It’s based off of the characteristics of each animal. I can speak about the rooster: the rooster is loyal and genuine, but also stubborn. That’s where ‘cock fights’ come from,” Gao said. “The rooster does not get along with the rabbit, which I know because my grandmother is a rabbit.” 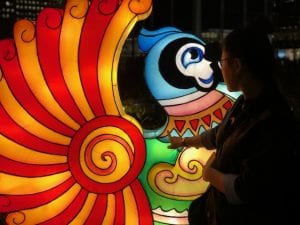 Gao connects with her zodiac animal. Image by Lindsay Rogers.

According to ancient Chinese folk stories, Gao said, there also existed a cat once in addition to the current 12, but an elaborate scheme at the hands of the rat left the cat out of final consideration, pointing to the absence of a cat lantern.

This year – 2019 – is the year of the pig. Those who were born in the year of the pig are to frequently wear red for luck, and in acknowledgment of their birth year, as per Chinese culture. The pig lantern sits smiling, large, and red, radiating luck and basking in its 10th month of glory. 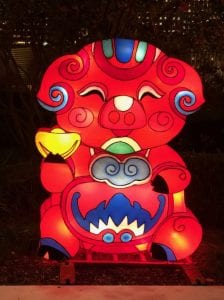 2019 is the year of the pig, red for good luck. Image by Lindsay Rogers.

“This is a very Western thing, though,” Jao said. “I’ve never seen this in China.”

She noted that she was anxious to see the festival in its entirety, which she hoped would showcase a wider variety of lanterns in the way they are traditionally depicted.

The free pop-up runs through Nov. 16, and the festival itself begins on Nov. 20.