(HOUSTON, Texas) — Within 48 hours the U.S. Census Bureau put all hands on deck to make sure everyone across the country was counted in the 2020 Census. On Oct. 13, the U.S. Supreme Court gave census takers, who had hoped for more time only two days to finalize the months-long process. On the day of the deadline, Rep. Sheila Jackson Lee (D-TX) and other community leaders exhorted Houstonian’s to complete the questionnaire.

“We have to fix what the administration undermined…community groups [and] elected officials across the nation had advocated that our census continue until Oct. 31,” Lee said at a Houston elementary school. “We won in the federal courts but it went to the United States Supreme Court…and in the last 48 hours, [they] said ‘No, shut it down.’”

When the pandemic delayed operations in March, the deadline was pushed from Aug. 15 to Oct. 31. The SCOTUS decision overruled the lower court and moved the deadline up for census takers to mid-October. As a result, this set Dec. 31 as the final date for the bureau to deliver their apportionment counts to the president, instead of April 2021 when it was originally established. This allows the administration to send information on congressional seats to Congress while President Trump is still in office.

The decennial census, required by the U.S. Constitution every 10 years determines the number of seats each state has in the House of Representatives. It is also used to distribute hundreds of billions of dollars in federal funds to local communities. According to the bureau, more than $675 billion in federal funding is distributed to states each year.

“For each person not listed in the 2020 census…that means we’ll lose $1,160 per person in a single year under five federal programs results in $71 million lost in Harris County. Those are all numbers, but for me, they are lives,” Congresswoman Lee said. 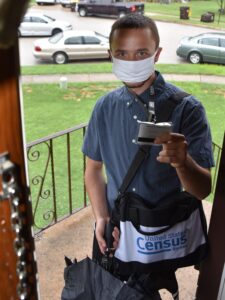 Moving the deadline up means it will be more challenging to include the chronically difficult to count including undocumented immigrants, people below the poverty line, and renters who tend to be harder to locate than homeowners.

Paul Brace, a political science professor at Rice University, explained that those harder to reach groups typically reside in more Democratic districts. By undercounting a population, it effectively under-represents them in the apportionment of votes and representation in Congress.

“This is the latest in a series of efforts by the Trump administration to seemingly undercount, because they first wanted to introduce a citizenship question into the census…but I think most people believed it was, in fact, an attempt to suppress undocumented residents from participating in the census.” Brace said. “That failed before the Supreme Court, but [the deadline] succeeded.”

Census takers went house-to-house, risking their health in the middle of a pandemic, desperately tried to get everyone counted before the deadline. Meanwhile, federal funding and congressional seats once again fall in the game of politics.

“Let’s assume that the Trump administration likes the undercount. They want to have control on the final numbers. They’ve moved up the deadline, so he can finalize it in December of this year, rather than let this linger until April of next year, where it’s possible or even likely, he won’t be President.” Brace said. “So there’s a lot at stake here.”