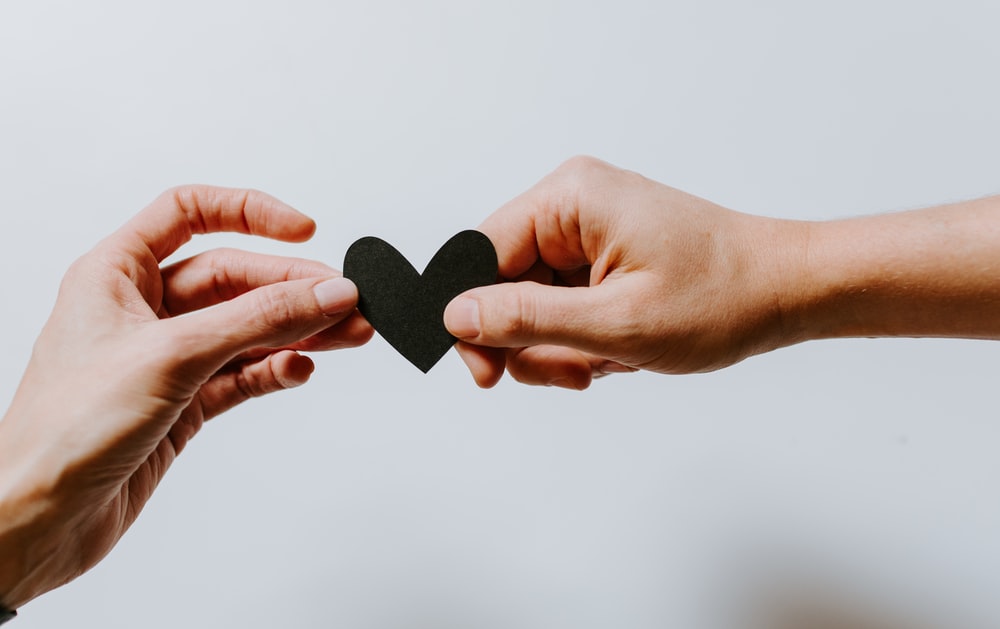 Man And Woman Holding A Heart Together: [Credit upsplash.com]

(WESTCHESTER, N.Y.) — When an average person gets a new partner, no one bats an eye. But when a celebrity is spotted with someone new, everyone wants to know who they are and why they’re together.  In a December 8th, 2021, article from People Magazine, actress Jennifer Aniston said that “Men can be married as many times as they want to, they can marry women in their 20s or 30s. Women aren’t allowed to do that.”

Relationships, whether they are just starting out or have been going on for a while, are the business of the two people that are in it. The relationship is not the business of a journalist or media outlet, but when you are a celebrity that decency goes out the window.

If a male celebrity is seen with a female friend, co-worker, or romantic partner, it’s assumed they are just friends for the first few times they’re seen in public. Media outlets tend to take time to ensure they’re actually dating and don’t just say it outright. They give men much credit in the sense that if they are dating, they can say who they are dating and how long it’s been ongoing.

Male celebrities, like Pete Davidson, can be in as many relationships as they want and seem to have few repercussions. The media rarely calls them names, and will sometimes praise a man for going out with a new woman right after he broke up with another one. In some cases, like after being linked to Kim Kardashian recently, an article will come out chronicling his relationship history, and others that share the history of a phrase after an offhand comment from ex-fiancè Ariana Grande which people believe is how he gets these women.

Darian Lusk, entertainment reporter and editor with The U.S. Sun, said in an interview that the nickname adds a twist to the conversation about how body positivity is seen in the media.

“So I think that, while things have come like a decently long way, there’s still major problems,” Lusk said. “I think, sort of one of those is like, how the idea of body positivity, and I feel like that’s not really like, real because whenever a female celebrity loses weight, gains weight, changes their appearance, such a thing. But with celebrities like Pete Davidson,  the media just finds a way to celebrate that with, you know, something like ‘BDE’ or ‘look at his tattooed body,’ and I feel like a lot of outlets, I think, are quicker to paint male celebrities and their appearances in a more forgiving light.”

Sure, having every move you make in a relationship put under a microscope cannot be great, but it’s even worse when that celebrity is a woman. If someone like Taylor Swift is seen with any male, friend, or romantic partner, she is automatically assumed to be dating them. An example is when Swift and singer Harry Styles were seen together. No one reached out to confirm that they were romantically involved, but said that they were anyways.  The media does not take the time to confirm that she is or isn’t in that particular relationship. News outlets big and small automatically portray her as a tramp.

This could have a major effect on how people not only see someone like Taylor Swift as a musician, but also as a person. There is a lyric in Swift’s song, “The Man,” that says “Every conquest I had made would make me more of a boss to you.” This line really speaks to how she knows that if she were a man, she would be treated differently and the media would have no problem with how many people she dated. Swift’s songs also have a big play in how entertainment news covers her.

Ashley Spencer, who has written for outlets such as the New York Times and Vanity Fair, had great insight as to why relationships are covered this way and what she thinks about the coverage of males versus females. Men can be seen with whoever and no one says anything because they are so okay with it, while women have an ulterior motive for the relationship and things like social media only add to it, things like Swift’s songs also have a big role in how entertainment news covers her.

Spencer noted that “there was a bit more to throw at her (Swift)  to say this isn’t a purely love relationship.” She said with Davidson, however,  that “People say, ‘well I think this is mutually beneficial to both of their careers.’ There is probably an element of publicity in this… I think we realize that we want the golden couple and we recognize that we don’t expect people’s relationships to be perfect, we also look at how a relationship can potentially benefit people’s careers.”

Spencer went on to say that “Pete Davidson is kind of getting a similar treatment to what she (Swift) got. I don’t think people are like, ‘yeah this is great.’ Like in the old days with Leonardo DiCaprio, people used to view that as a very admirable thing that he was dating these younger women. Now we are questioning if it is okay for them to be getting older and dating someone that stays the same age, to quote the Taylor Swift song.”

Lauren Moraski, former entertainment editor for HuffPost, entertainment managing editor at CBS News, and now an assistant professor at The New School, had a great look into why high profile celebrities like Taylor Swift and Pete Davidson have become the talk of the town when they enter a new relationship.

“Celebrities who are in the zeitgeist — and with major fan bases — are more likely to be the center of attention,” Moraski said. “Taylor Swift happens to use her personal experiences to channel her art. She also happens to have had some high-profile romances. Media plays into that. With every new album she makes, we’re all guessing who and what each song is about.”

Speaking to why consumers of entertainment news are so invested in the relationships of high profile celebrities, Moraski said, “Dating and relationships are a hot topic in our own personal lives, so it’s no surprise we’re eager for gossip about people we never met, but feel like we know. In a way, their own lives may reflect our own experiences… We all think about the one who got away or the ex-lover we just can’t shake. Perhaps some folks almost want to live vicariously.”

Spencer shared the same type of sentiment and said, “There’s definitely a tier of people like Taylor Swift or someone who has such a level with a broad base that everyone’s going to cover that no matter what, but I think you would also see a lot of coverage around reality stars in particular… I think outlets go where the readers go.”

Lusk also said, “I think that the more famous you are, the higher you are, the harder you fall. So I think that people are definitely looking to hate-read about certain celebrities. And I think that that really goes for both genders. But I think there are definitely certain female celebrities who really get it tough. I think that’s why Taylor Swift watches everything she does, and that’s why she barely posts on social media… Because, you know, people will just come for her right away. That’s not just media, that’s like fans, too. Fans are so quick to start commenting, hateful stuff.” She means the sexism in the coverage has only been amplified by social media.

Spencer said, “I definitely think that, for the most part, it’s a mutually beneficial relationship. Entertainment journalism exists because celebrities recognize that publicity is kind of a necessary part of that career.  I think it’s also important to look at if both people in the relationship are public figures… if you’re exposing a non-public figure in a relationship, you’re potentially putting that person at risk for doxxing and getting all kinds of abuse online, and possibly in-person even so there’s definitely care to be taken.”

Moraski said, “I don’t see a future where the media will stop covering celebrities. I have seen an evolution in how we cover them. Tabloids and other outlets are much more mindful and careful these days about covering stars alongside big topics such as mental health or suicide…Today, celebrities are more in charge of their information in a way. They have the power to control the narrative a bit more thanks to access to platforms such as Twitter and Instagram.”

Being a female celebrity like Taylor Swift is hard enough because you are constantly under a microscope. Add a relationship into that mix and it only gets worse. Journalists have a responsibility to cover them not only fairly, but ethically. They need to respect when a celebrity, male or female, wants to go public with a relationship or if they want to keep it private. No matter what, when covering celebrity relationships there needs to be a standard that everyone is held to as a way to make sure all coverage is equal.