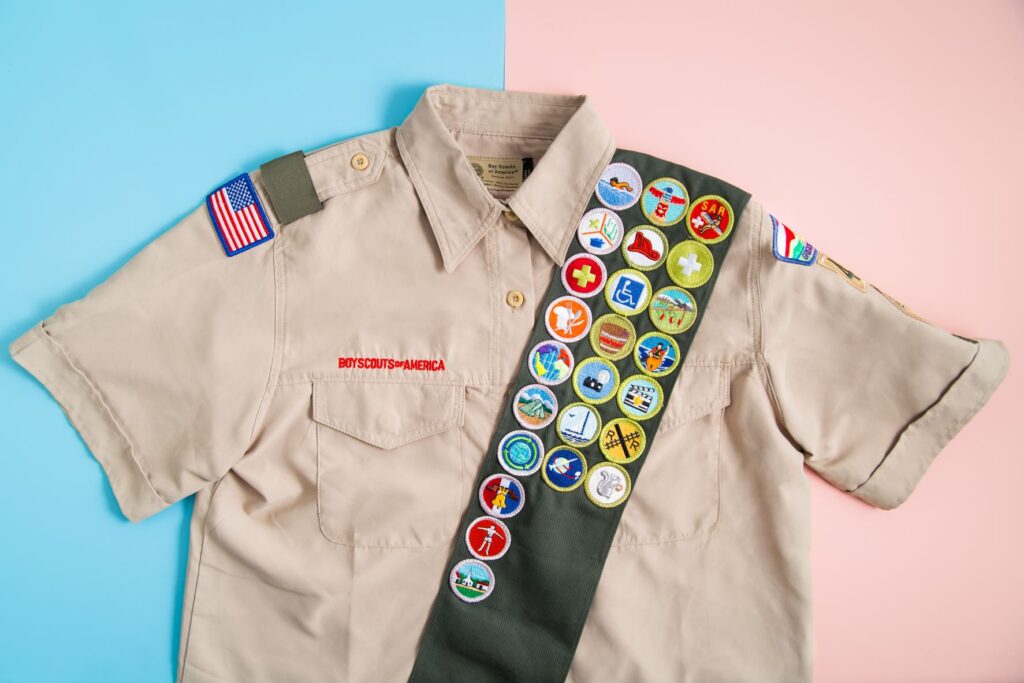 Girls have broken another barrier: they can now join the Boy Scouts. But the Girl Scouts object. What happens if progress means the loss of all-female spaces and networks of support?

One recent girl’s weekend, somewhere between sad-song karaoke and the board game “Telestrations After Dark,” I brought up scouting to four of my mom friends, whose kids are the same age as mine. One mom said they had briefly tried Girl Scouts, but other activities got in the way. Another mom said she had resisted enrolling her two daughters. “I thought Girl Scouts was just about the cookies and, what, a sewing patch?” the mom said. “I was worried it would reinforce gender stereotypes. It’s just not for me.”

As we spent the next 24 hours eating, laughing, and catching up, I thought about the magic that happened so effortlessly on girls’ nights. Besides the occasional hangover, I always feel rejuvenated. My school-aged daughter had one unremarkable semester of daisyhood (entry-level Girl Scouts,) sold a few cookies, and got to hang out with her classmates. As she’s gotten older, she’s become an outdoorsy kid who loves to camp. One of her best friends is a male Boy Scout, and now that the rules have changed and she can choose either, I’m considering scouting possibilities with new eyes. If my daughter never has sisters, never goes to an all-girls school, or never joins the Girl Scouts, will she miss out?

My own life has been marked by female friendships. I’m one of three daughters, and being part of a sister gang is a joy. I attended an all-girls high school, which changed my life, offering women role models and helping me build relationships that remain touchstones. These friends are the ones I called when I was in my twenties and wanted to leave a boyfriend but didn’t know if I could. They came in the night like a swat team with a U-Haul, and I was out of there before he could convince me otherwise. Years later, I had my group of mom friends to get me through the pandemic; we rely on each other for advice, jokes, and text support on an almost daily basis.

When I heard in 2019 that girls would now be welcome as Boy Scouts, my feminist heart gave a little cheer. Then I saw that this prompted the Girl Scouts to sue the Boy Scouts. The Girl Scouts brought a trademark complaint against the Boy Scouts (now known as BSA Scouts) in 2017. At the time, Girl Scout lawyers said the BSA was marketing to girls using the term “scouting,” an activity that had been the sole arena of the Girls Scouts for decades. Lawyers for the Girl Scouts claimed in the lawsuit that when the BSA used the terms “scouting” in marketing materials aimed at girls, it was misleading to the public. Indeed, some thought the Girl Scouts and BSA were merging, which wasn’t the case.

Then on September 15, Bloomberg reported that U.S. district judge Alvin Hellerstein tentatively found in favor of BSA and would likely be throwing out the case brought by the Girl Scouts. Though the judge has not yet issued a final decision, it appears likely that BSA will be able to market scouting to anyone they please. Judge Hellerstein told attorneys, “‘Girl Scouts’ is a brand. ‘Boy Scouts’ is a brand, but ‘scouting’ describes an activity.” The Girl Scouts declined to make an official statement on the case until the final ruling. Their spokesperson said they would continue to fight against “unethical Scout marketing tactics that aim to confuse and mislead families.”

In examining the turf war over scouts, I wondered if the Girl Scouts have a legitimate point in objecting to BSA’s poaching girls. If all-female, women-led groups are good, in and of themselves, then as our society gets more inclusive, what happens if they disappear?

It’s easy to see why the Girl Scouts are miffed. They’ve coexisted with BSA for over 100 years, and from the earliest days of scouting in America, a key feature of the Boy Scout brand was exclusion by gender. Girls tried to become Boy Scouts as early as 1909, and they kept trying. In 1974, nine Boy Scouts in Texas declined their badges because a female member who had been participating outside of official channels wasn’t allowed to get any badges. In another high-profile case in 1997, Yeaw v. Boy Scouts of America, the question went to the California Supreme Court, which ruled that the Boy Scouts were akin to a private business or charity and did not have to allow Katrina Yeaw to join her twin brother’s troop.

In 2015, only two years before the policy changed, the Boy Scouts denied five girls in California admission, releasing the somewhat sniffy statement: “We understand that the values and the lessons of Scouting are attractive to the entire family,” the national organization said in a statement. “However, Cub Scouts and Boy Scouts are year-round programs for boys and young men in the first grade through age 18.”

It wasn’t just cis girls; any whiff of non-traditional masculinity wasn’t tolerated. Trans scouts and openly gay scouts and leaders all struggled to be admitted by BSA, finally breaking through in recent years. (Openly gay scouts were allowed in 2013, openly gay troop leaders in 2015 and transgender scouts in 2017.)

Meanwhile, the Girl Scouts have long emphasized inclusion and the uniqueness of each member. They admitted gay scouts and trans scouts earlier than the BSA, publically enrolling a transgender scout in 2011. In 2012, The Advocate, an LGBTQ+ interest magazine, reported on a 30-year difference between the Girl Scouts and Boy Scouts in terms of gay rights.

Even the cookies, perhaps the best-known cultural symbol for Girl Scouts, are a relic of sexist marginalization. A troop came up with the idea in 1917 as a way to raise money when they found that philanthropists weren’t excited to fund programs meant only for girls.

Participation in both groups peaked in the 1970s when they each served about four million scouts a year. With falling enrollment, a high-profile scandal in which 92,000 former Boy Scouts accused the organization of sexual abuse, and looming bankruptcy, BSA’s 2017 decision to admit girls seemed to some Girl Scouts supporters to be out of desperation rather than a desire to be inclusive. When the announcement was made, a spokesperson for the Girl Scouts told ABC news that the Boy Scouts were only doing it because “The Boy Scout’s house is on fire.” Since then, the AP reported that 140,000 girls have joined the BSA Scouts.

The Girl Scouts maintain that girls are better served by their organization than BSA Scouts. As Andrea Bastiani Archibald, a psychologist who provides expertise on development for the Girl Scouts’ organization told CBS News, “We know that girls learn best in an all-girl, girl-led environment.”

Research on single-sex education agrees, suggesting that girls benefit from these environments. In 2021, a study out of the UK found that “girls attending girls’ schools possess higher mental toughness scores” than girls from co-ed schools.

Still, not all researchers concur, and even some of those who believe that single-sex education is beneficial think it might not exist in 50 years. Cultural understanding of gender is changing. For those who believe in inclusion (an important Girl Scout value, by the way), that’s a good thing. But these changes may render single-sex environments obsolete.

Scouting families have experienced the recent changes firsthand. I spoke to an acquaintance whose daughter had been both a Girl Scouts member and a BSA Scout member at the same time. Ultimately, the girl stuck with BSA and quit Girl Scouts. Her mom, Kelly Fisher-Bishop, said her daughter had more fun in BSA. There were more outings and activities. Plus, the girl’s father was her troop leader, having been a Boy Scout as a child. But Fisher-Bishop told The Click, “I think Girl Scouts can be fun, too, if there’s a good leader.”

That may be part of the problem. Finding unpaid volunteer moms to lead the troops wasn’t difficult in the beginning, but when women started working outside of the home in larger numbers after the 1960s, it became harder to find leaders who had the time. Between motherhood, working, and still doing the majority of housework, Girl Scout troop leaders in the U.S. became scarce, leaving 30,000 girls on the waitlist to join in 2014.

Erin Schaeffer, who serves as a Girl Scouts leader for her daughter Adele’s troop, said their troop lost two members to BSA Scouts, but that one of them returned because she found she enjoyed Girl Scouts more. “My impression is that Boy Scouts are more prescribed in what they do and that with Girl Scouts, you can individualize depending on the unique interests of the girls in that troop,” Schaeffer said.

But she agreed that the girl scouting experience depends heavily on strong troop leadership. “I think these troops dissipate a lot. People get busy, move away,” she said. “Since the moms are the troop leaders, and as we know, moms are responsible for so many things in home life and work, sometimes troops disband when the mom can’t do it anymore.”

Melissa Nehrt, who has served as a Girl Scout troop leader for both of her daughters, said, “I love that the Girl Scouts put such a huge emphasis on being girl-led.” She spoke of her older daughter, whose personality is somewhat reserved. When their troop did a robotics competition, Nehrt said that if there were boys in the group, her daughter might have had to fight to be heard. As it was, she didn’t hesitate to take a lead role.

When it comes to my daughter, I’ll let her decide. She’s leaning toward the BSA. I see why both types of scouts, though, may have a lot to compete with when there’s hip-hop dance and rock climbing as after-school possibilities. “Girl Scouts seems so… girly,” my daughter said. Her casual use of “girly” as criticism struck me. At the same time, I felt happy that she could join her bestie in his troop if she wanted and that as things evolve for the younger generation in their understanding of gender, they won’t be constrained.

I thought about how in adult life, there’s nothing concrete to show for getting through some of life’s biggest milestones—the gritty sleepless days of early parenthood, midlife career transitions, dealing with the illness of a parent. Female support networks have helped me persevere through these challenges. But I can’t force the world I grew up in on my daughter, just as my mother didn’t force the gender roles of her era on me. As society becomes more inclusive and some young people eschew the concept of gender, she’ll have her own understanding of it and find her own systems of support organically.

One recent weekend, I dropped my daughter off at a birthday party at a park and saw five kids from the party, boys and girls alike, run up to greet her, happy that she came. As they went off down the park path to play tag amid the piles of leaves, I made a silent wish that life will bless her with friends who lift her up and spaces where she can be herself in the face of life’s challenges when there are no merit badges to show for making it through.