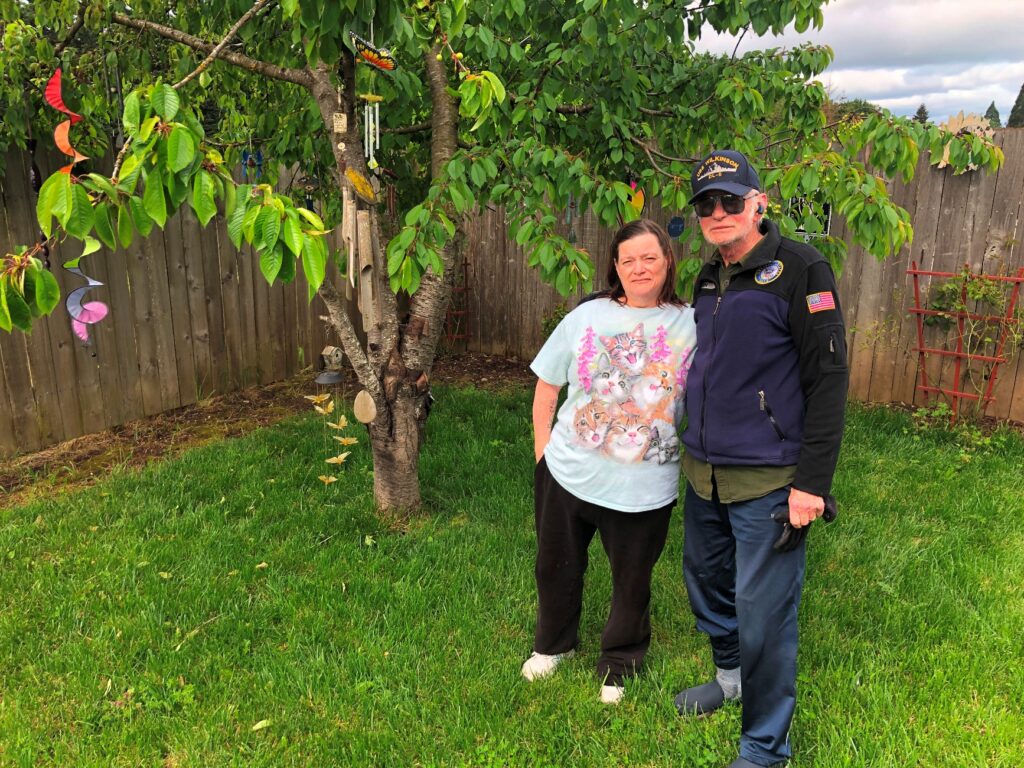 Kat Anderson (left) and her father Jim Irwin (right) in the yard of their home across the street from the J.H. Baxter facility. The flowers and trees she’s planted over the years could be removed once new soil replaces the current beds, due to dioxin levels. [Credit: Brian Bull]

(EUGENE, Ore.)— A decade ago, Kat Anderson decided to plant flowers at the home she shares with her father in the Bethel neighborhood of Eugene. Today at 55, the former caretaker is trying to get disability benefits and wants to be evaluated for a wheelchair because she can’t walk very far.

“Cause I’ve been digging in that yard for 10 years,” she said. Anderson said her symptoms include weight loss, some pain, and anemia.

Anderson blames the J.H. Baxter wood processing facility, across the street from her home.  For 80 years, the facility has been the source of government probes, fines, and complaints from neighbors—usually of foul odors.

“It bothered me a few times, it got really strong,” said 82-year-old Jim Irwin, a retired air traffic controller and Anderson’s father. “But not enough for me to worry about it. I kinda like the smell of creosote actually, as long as it’s not too strong.”

Irwin said he got the house really cheap in 2011, for $145,000, because it was a “repo.”  But in light of his daughter’s worsening health, he thinks the realtor, the Oregon Department of Environmental Quality, the City of Eugene, or the J.H. Baxter company itself should have notified him about potential contaminants from the Baxter site.

In fact, Irwin said the topic of dioxins didn’t come up for area residents until this January, when he and several neighbors got a letter from the Oregon Department of Environmental Quality (DEQ) informing them of the results of soil sampling done in October 2021. In its letter, the state agency said the concentration of dioxins in the soil was high enough that the agency would need to remove the soil from Irwin’s property later this year.

“While this does not present an imminent health risk,” said the letter, “DEQ has determined that cleanup of the soil on your property is needed to reduce the long-term health risks from dioxins in your soil.”

Dioxins are highly toxic and can cause cancer, as well as damage to the immune system, and problems with reproductive and developmental abilities, according to the Environmental Protection Agency. And while human exposure tends to be through ingesting meat, dairy, and seafood products, industrial processes can also put dioxins into the air, water, and soil. For children who like to play in the yard, or adults like Anderson who enjoy gardening, that exposure could potentially cause problems if consistent. 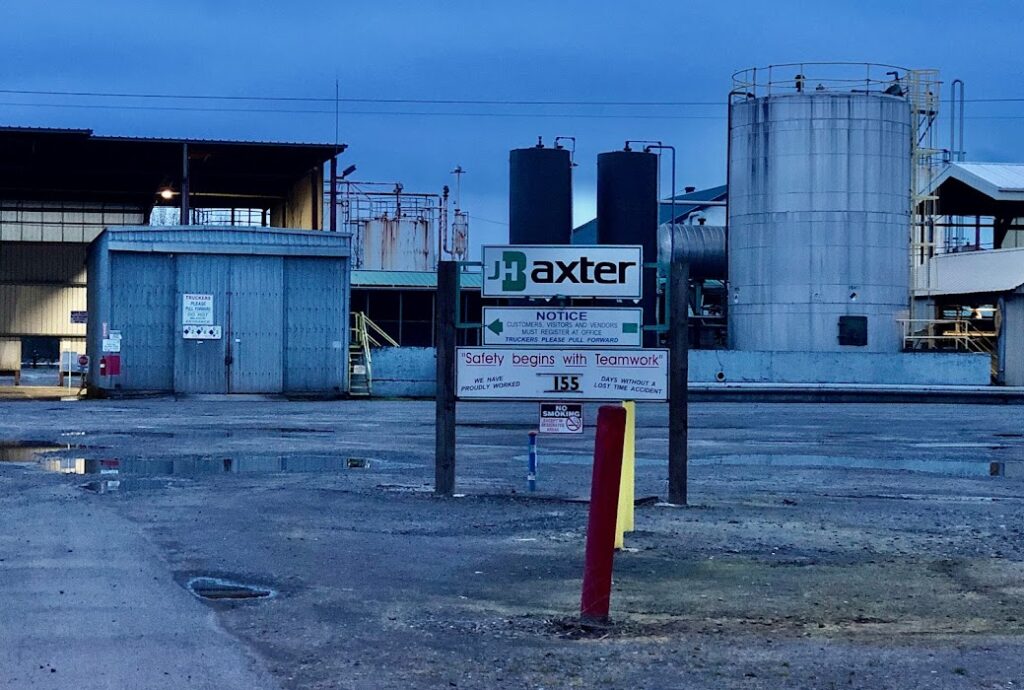 The now-shuttered J.H. Baxter wood processing facility, which operated for 80 years before closing on January 31, 2022. Many area residents worry emissions from the facility have contaminated their environment. [Credit: Brian Bull]

An extensive history of industry and concern

On January 31, the J.H. Baxter facility at 3494 Roosevelt Boulevard in Eugene shut down. In its 80 years of operation, the plant saw countless railroad ties, utility poles, and other prominent wood products pressure treated with chemicals (including creosote) and shipped out across the region. It also saw a steady stream of complaints, probes, and fines tied to its use of chemicals.

Residents in the neighboring community of Bethel frequently griped about noxious odors emitted from the 42-acre facility throughout the day and night, with local organizations like Beyond Toxics and Active Bethel Citizens pressing for greater oversight of a company they feared was not abiding by environmental regulations.

The rancorous opposition didn’t subside after company executives announced the permanent shuttering of the J.H. Baxter wood treatment plant earlier this year.  Instead, environmental and community advocates are disappointed in what they see as a lot of unresolved concerns.

“All this contamination is harming people in many ways, whether it’s a personal health or the value of the property, and their livability, their ability to enjoy their lives and to enjoy their neighborhoods,” said Lisa Arkin, executive director of Beyond Toxics. “So when you put that against the fact that J.H. Baxter is simply walking away from the harm they’ve caused, and in addition, contesting the finding of violations in the imposing of civil penalties…we have grave concerns that our laws are not strong enough to stop them from simply walking away from this mess and leaving it for the public taxpayers to pay for.”

In its petition for party status filed last November, Beyond Toxics said the DEQ cannot adequately represent the public interest “because its position is more intermediary than advocate.”

“DEQ will be engaged with Baxter as long as there are environmental issues to address at and near the facility,” said spokesman Dylan Darling, in an email to The Click and KLCC, which shared in the reporting of this story.  “The department will continue to inspect and investigate as needed to ensure compliance.”

Other regulatory agencies include Oregon Health Authority and Lane Regional Air Protection Agency (LRAPA).  OHA has done studies on cancer rates in the vicinity of the Baxter facility (which showed the West Eugene neighborhoods had slightly higher rates of lung cancer and Hodgkin’s lymphoma than the state and county rates) while LRAPA has issued its own share of fines in the last decade, resulting in J.H. Baxter paying over $10,000.

J.H. Baxter president Georgia Baxter said in a Jan. 28 letter to the DEQ that the plant was closing due to poor financial outlooks. In the letter, which was obtained by The Click and Oregon public radio station KLCC through a public records request, Baxter cites several reasons, including “rising costs” associated with running the plant, as well as “dwindling sales margins due to shifts in the market.”  The letter goes on to say that even though the plant would be shuttered, J.H. Baxter would comply with all regulatory requirements regarding stormwater, groundwater, and process water treatment.”

Darling said clean-up operations have been going on at the Eugene plant since the 1990s, while the U.S. Environmental Protection Agency has labeled it a “significant non-complier” in its enforcement and compliance database, specifically within the scope of the Resource Conservation and Recovery Act (RCRA).  The act gives the EPA the authority to regulate hazardous waste “from cradle to grave.”  Data shows in the last five years, the EPA took 13 enforcement actions against J.H. Baxter, with penalties nearing $150,000.

Regarding the recent detection of elevated levels of dioxins in local residents’ soil, the DEQ’s Darling said three types of dioxins need immediate soil removal by early summer, with four needing eventual soil removal. Two more properties still need to be sampled, while one does not require cleanup.

The DEQ announced on Jan. 13 that certain dioxins would need removal from local soil by early summer, and J.H. Baxter would be responsible for cleanup. Two weeks later, the company announced its closure. The company said it could not cover the expense.

“We are still trying to figure that out ourselves,” said Rebekah Dawit, an associate attorney of the non-profit Crag Law Center. “It’s unclear but we’re also researching.”

Additionally, J.H. Baxter is appealing financial penalties the DEQ leveled against it in March 2021. Of the $223,440 originally announced, the majority of it— $178,905—was for the unpermitted treatment of hazardous waste at the Eugene facility.  Officials determined that Baxter treated 1.7 million gallons of waste — consisting of water, oil, and wood preservatives — over a five-year period, using large chambers called retorts to boil off or evaporate the hazardous material.

An additional $14,735 was fined against Baxter for allowing two instances of untreated stormwater and boiler water to overflow into a storm ditch that fed into the city’s Amazon Creek in spring 2019, among other hazardous waste and water quality violations, posing risks to the public health and environment.

A DEQ amendment issued May 5, obtained exclusively by The Click/KLCC, added several more violations to the March 2021 notice.  This includes two overflows of untreated stormwater last December and January, failing to minimize releases of hazardous waste, storing hazardous waste on the premises for too long without a permit, and failing to label containers with hazardous waste and used oil. The amended violations bring the total fines against J.H. Baxter to $305,440.

Darling said the amended notice also reflects Baxter’s efforts to comply with corrective actions, though it has not withdrawn any violations.

Settlement talks regarding those penalties, originally slated for mid-May, are now scheduled for August.

The Eugene-based environmental advocacy group, Beyond Toxics, has pledged to make sure J.H. Baxter is held accountable for its cleanup responsibilities, both in the surrounding neighborhood “and their own seriously contaminated 42-acre site.”

“Our contested case hearing with J.H. Baxter and DEQ is going to be from August 2 to August 4,” said Crag Law’s Dawit. “Beyond Toxics will be participating as a limited party. So we are limited to a closing argument brief. So, after we hear all the evidence, after we hear the hearing, then we are able to supply a brief.”

J.H. Baxter’s legal troubles don’t end there. It’s also facing two federal, class-action lawsuits in Oregon’s 9th Circuit District Court.  One of the suit’s attorneys, Chris Nidel, said his clients are seeking damages from J.H. Baxter for nuisance, trespass, and negligence, arguing that the company knowingly and willfully discharged chemical emissions – including heavy metals such as arsenic — into the air.  This included a ten-year period where Baxter allegedly used its retorts to make hazardous waste “disappear” by evaporating them before discharging them into the community.

Meanwhile, the DEQ said it plans to sample and analyze 30 more residences in the immediate perimeter of the J.H. Baxter wood processing facility.

Nidel said the costs of removing and replacing soil can easily run into the millions of dollars.

“That’s not even talking about the impact on these people’s property values, the impact on their quality of life, and ultimately the impact on their health and well-being,” he added. “While my lawsuit is not about cancer, I have certainly spoken to a number of people that have experienced what appears to be rare and unusual cancers connected to things like dioxins, things like semi-volatile chemicals like naphthalene, and the like. The sad, sad fact is that Baxter—it appears—will never be forced to and will never be able to pay for the ravaging of this community.”

Kat Anderson said she’s talked to her nephrologist, and he determined it’s possible that chemical emissions from the plant could have affected her health. She responded to a Detroit law firm’s letter in February inviting her to join a lawsuit against J.H. Baxter and is still waiting to hear back.

While the class action suits against J.H. Baxter are seeking millions of dollars in damages, Anderson’s sights are modest.

She wants “just enough to cover anything the insurance doesn’t cover,” she said, preparing to leave for the doctor. “Y’know,  I’m not a greedy person.” 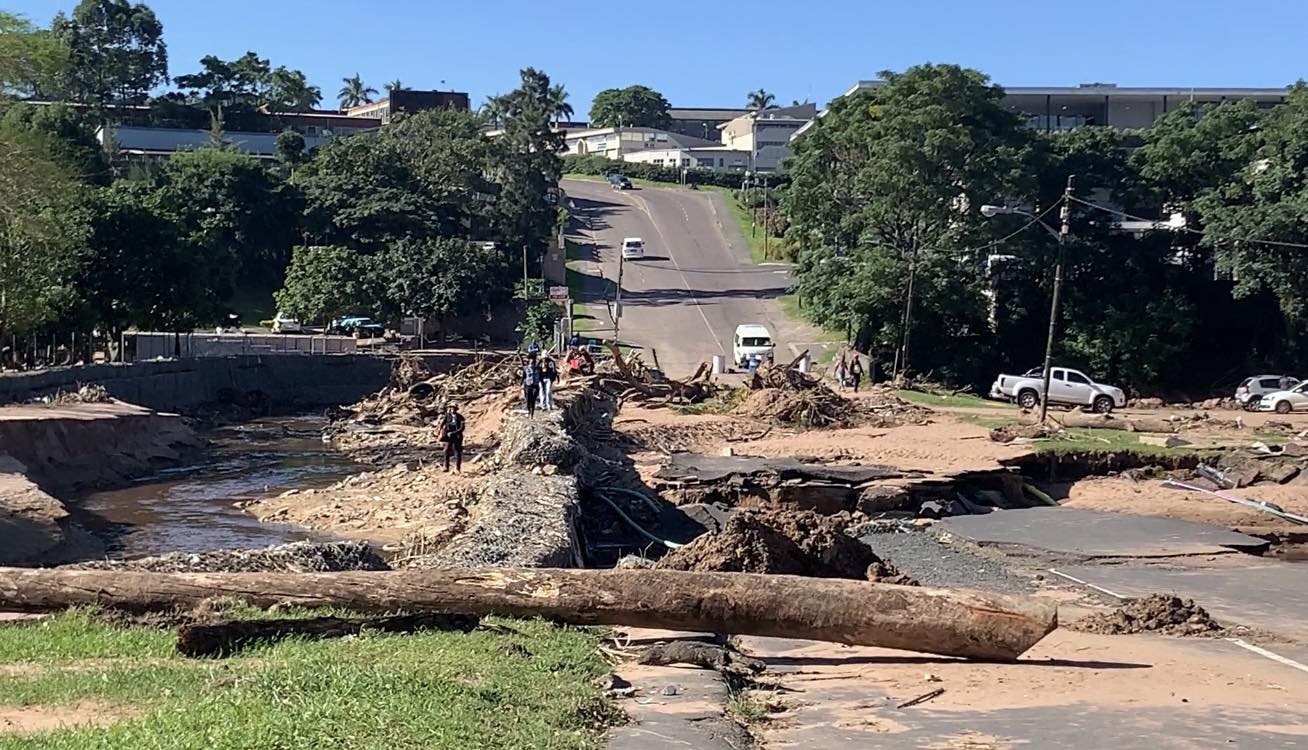