Afghanistan is a country that’s been under siege since 1979.  First it was the Russian invasion. Then, after the September 11 terrorist attacks in the US, it was the American army. They came for Osama bin Laden, but the fighting lasted for almost 20 years which left a lot of misery in its wake.

According to the United Nations High Commissioner for Refugees (UNHCR ),  more than a million  registered Afghan refugees have fled with their families to Pakistan.

They include Ajab Gul who dreams of becoming  a doctor one day.

“We came from Afghanistan’s province Baghlan to Islamabad, Pakistan in 1998,” he said.

Ajab Gul, who was born in Pakistan after his parents fled Afghanistan 24 years ago, is considered fortunate to be studying at the F.Sc Pre-Medical College in Islamabad. 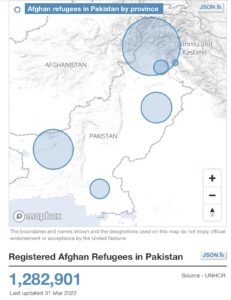 UNHCR reports Pakistan has received more than a million registered Afghan refugees since the Russian invasion of Afghanistan in 1979. More displaced Afghans arrived after the US invasion in 2001. [Credit: UNHCR.org]

“I was rejected first and told that since you’re not the citizen of this country so you can’t get admission in government college, after that PKS organization helped me a lot with paperwork in getting admission,” he said.

Despite the existence of Pakistan’s birthright laws, even those Afghans born in Pakistan are still not offered citizenship. Afghan refugees face limitations in Pakistan. They can’t own land, register vehicles, or take a government job.  These kinds of restrictions have left many Afghans living in Pakistan in poverty. Most refugees work in the low-wage sector as day laborers . 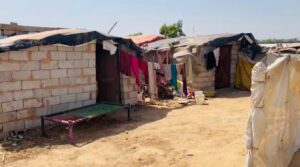 According to local sources, since the day the Taliban took control of Kabul on August 15, 2021, up to 5,000 Afghans have been trying to cross the Pakistani – Afghan border daily. There are two key, border crossings between Pakistan and Afghanistan — Chaman and Torkhamas— as well as several small trading points.

Pakistan has fenced off nearly 90% of the 2,640 kilometer boundary with Afghanistan and deployed the army to guard it as the government fears that members of banned terrorist outfits like ISIS and Tehrik – e- Taliban Pakistan ( TTP ) might enter Pakistan from Afghanistan in the guise of refugees and conduct terrorist activities in the country.

Pakistan’s government said it has reached its limit and cannot accept more Afghan refugees. It is demanding that the international forces and UNHCR make arrangements for the additional Afghan refugees. 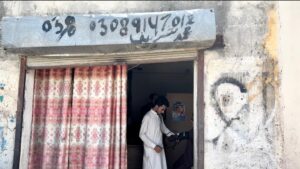