Ashley Holzmann Does Not Claim to Be a Journalist, But Should He?

(DISTRICT OF COLUMBIA) — Ashley Holzmann is not a journalist. He does not even consider himself to be one. A West-Point graduate and Army officer since 2009, Holzmann writes for a publication called “Duffel Blog,” a news parody site popular among veterans. His stories explore everything from national security to the sacrifices military families must make while their loved ones are serving. While none of Holzmann’s articles are based on verifiable facts, they regularly expose deep-seated truths about hard-to-understand issues that often go unreported in many news outlets. In a way, his work is more effective than that of many journalists.

For instance, a 2019 story Holzmann published titled “Mom of Four Goes to SERE School, Gets Amazing Sleep,” resonated with a wide group of readers, according to Holzmann. SERE, which stands for “survival, evasion, resistance, and escape,” is the name of an intense military course that is known for subjecting its students to severe sleep deprivation.

“The irony of all the things that SERE school is testing are things that a lot of military spouses already endure,” Holzmann told The Click. 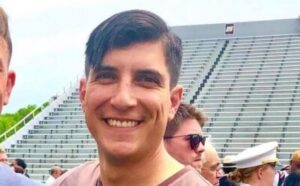 Despite having no verified facts, some readers found the article to be stunningly accurate. In Holzmann’s view, the article’s success lies in its form, which is not beholden to the facts.

“I think most journalists would say that they only deal in facts, but they’re probably lying to themselves. And I think the beauty of being an artist is we try not to lie to ourselves. Instead, we tell the truth,” he said.

In a world where only two percent of people working in the media are veterans, according to the Military Veterans in Journalism Network, Holzmann and other writers at Duffel Blog may also be filling a representational void left behind by journalists.

Pulitzer-prize winning journalist, Wesley Lowery also takes issue with the way journalists purport to deal with “facts.” In an op-ed published in the New York Times last year, he argues that journalists often value the appearance of “impartiality” or “objectivity” over their obligation to the truth.

Further, Lowery argues that “neutral ‘objective journalism’ is constructed atop a pyramid of subjective decision-making: which stories to cover, how intensely to cover those stories, which sources to seek out and include, which pieces of information are highlighted and which are downplayed.”

More than a century before Lowery, American philosopher and psychologist William James had already pointed to the problem of “empiricists” purporting to be unbiased in the way they described the world. He reasoned that language “was not made by psychologists, but by men who as a rule are only interested in the facts their mental states revealed.”

Today, a plethora of organizations stake their reputations on claims that they are objective and beholden only to facts. But if facts and objectivity are not real in and of themselves, what’s the real goal of a journalist?

In its code of ethics, the Society of Professional Journalists does not even include the word “bias.” Instead, it lists the following principles: seek truth and report it, minimize harm, act independently, and be accountable and transparent.

Since the Duffel Blog generally follows these principles and guidelines, their use of satire and parody could simply be a function of journalism. Holzmann might not think he’s a journalist, but his work certainly across as a form of journalism.