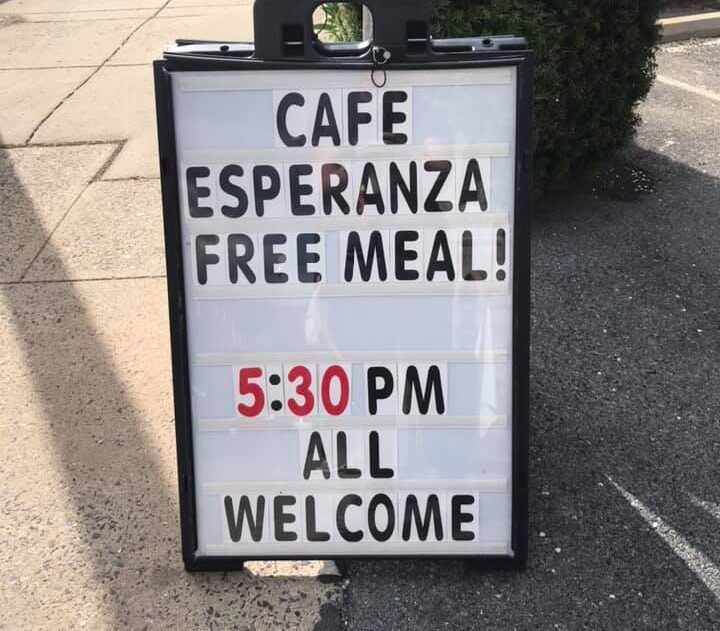 This Pennsylvania Cafe Serves Human Dignity With Every Meal

(READING, Pa.) — In early spring, Emily Wolfe, the volunteer coordinator for Cafe Esperanza, a pay-what-you-can restaurant on West Greenwich St., was excited to bring great food to people who might not otherwise be able to afford it. But then the pandemic hit, delaying the March 20 grand opening. Wolfe and other employees and volunteers were devastated.

“The cafe is there to provide food with dignity, but the end goal is to create community,” Wolfe said. “And we thought we weren’t going to be doing that.”

Cafe Esperanza follows the model of One World Everybody Eats (OWEE), a nonprofit organization dedicated to alleviating food insecurity and fostering community. Diners can enjoy a chef-prepared meal for whatever they can afford to pay — or for free. Customers can also volunteer to work for their meal.

When Governor Tom Wolf announced a statewide shutdown on March 16, Hope Lutheran Church, adjacent to the cafe, suddenly couldn’t continue its weekly community meals to assist the food insecure and homeless. Cafe Esperanza stepped in to fill the need. When people arrived for the Tuesday meal, they couldn’t come inside, but received freshly prepared food to take with them. The cafe is taking responsibility for the Tuesday meals until the church opens again.

“We just jumped in and started making meals twice a week,” Wolfe said. They prepare 200 meals every time they serve.

Public transit in Reading was not operating during the statewide shutdown, and Wolfe also delivered meals to people who were confined to their homes and had no one to shop for them.

Although no meals have been eaten inside, the Cafe Esperanza team say they have served approximately 4,000 people since March. Despite her early doubts, Wolfe realizes that the cafe has created community, even in its limited capacity. There are still some equipment purchases and interior construction that must be completed, but she is hopeful that a partial opening is not far off. As of October 11, Pennsylvania restaurants are operating at half their seating capacity.

“Now that [Pennsylvania is] at half capacity, we could probably have 12 to 15 people in there. … We want to have some sort of ability to be open or at least be able to serve coffee drinks and look finished by mid-October,” she said.

The cafe, which is one of 50 pay-what-you-can cafes in various U.S. locations supported by OWEE, is currently sustained through fundraising and grants, one of which is specific to the pandemic.