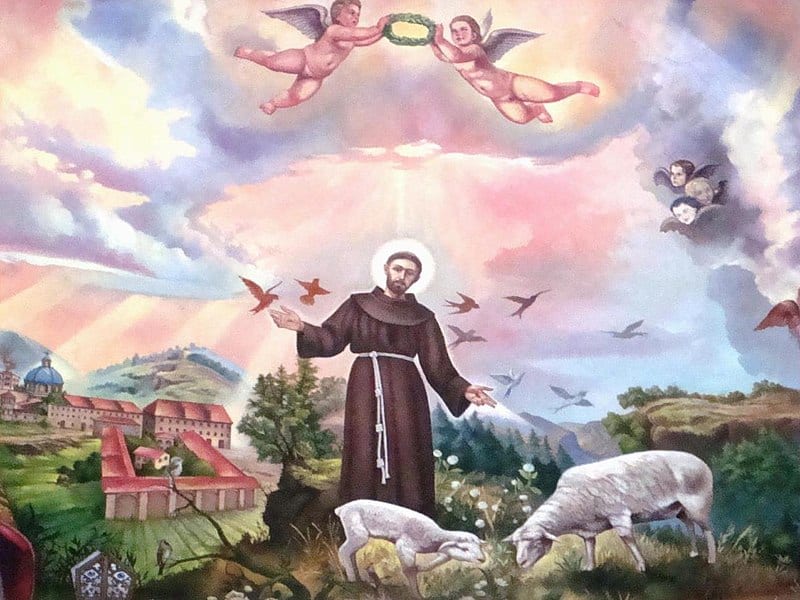 Hundreds of pet owners stood on sidewalks outside New York City churches holding their guinea pigs, cats, snakes, and various breeds of dogs as they do every year on this day.

October 4 marks the celebration of the Feast of St. Francis of Assisi, the patron saint of animals. Catholics all over the country wait in line with their beloved — in most cases — four-legged friends who are to be blessed. The annual event appeals to people of other faiths, too, and even some of no faith at all.

Caroline McCausland lives in the East Village with her cat Harvey, who is small in stature and entirely black with the exception of two white front paws. While McCausland does not identify as Catholic, or as being particularly religious in general, she did take the opportunity to have Harvey blessed on Friday afternoon at St. Mark’s Church in-the-Bowery, on E 10th St and 2nd Ave.

“I’ve seen a lot of other people do it, and it’s pretty widely advertised in the city actually,” McCausland said, who waited in line behind a man who brought his pet iguana.

When asked what had incentivized her to have Harvey blessed, McCausland told The Click, “I wanted him to be blessed because he’s the thing I love most in the world and I want him to have a long and healthy life.”

While the Feast of St. Francis is not the oldest of animal blessing traditions, it has become the most prominent, according to Amelie Wilmer’s book, “In the Sanctuary of Animals: Honoring God’s Creatures through Ritual and Relationship.”

“The twentieth century marked a sizable growth in animal blessings associated with St. Francis in all denominations, along with secular organizations,” Wilmer wrote.

This isn’t the first time animal blessings have occurred in New York City have brought forth creatures from all walks of life. The Episcopal Cathedral of St. John the Divine One began hosting its annual animal blessing ceremony in 1985, which according to Wilmer’s study, attracts over 1,500 animals and 3,000 humans. During the procession, each pet is brought forth to be blessed with holy water and a prayer.

“The diverse procession, led with incense, includes a variety of species, including a camel, llama, cow, elephant, and monkey, along with skunks, vultures, beehives, tarantulas, and even algae,” Wilmer said, of one particular blessing.

Most of the ceremonies extend invitations to multiple animals per household, offer complimentary refreshments to guests following the blessing, and request simply that all those receiving blessings come via carrier or on a leash.

St. Francis has become more relevant in the past years with the new Pope Francis taking his name, which according to Stimulus: The New Zealand Journal of Christian Thought and Practice by Nicola Hoggard Creegan, is something that no other pope has done before.

“Pope Francis recently broke with protocol in requesting an audience with a journalist and his guide-dog, stooping to bless the dog as well as the man. It was a small gesture, but one that suggests animals too might be in the Pope’s sights, along with all the other reforms he is gently introducing,” wrote Creegan.