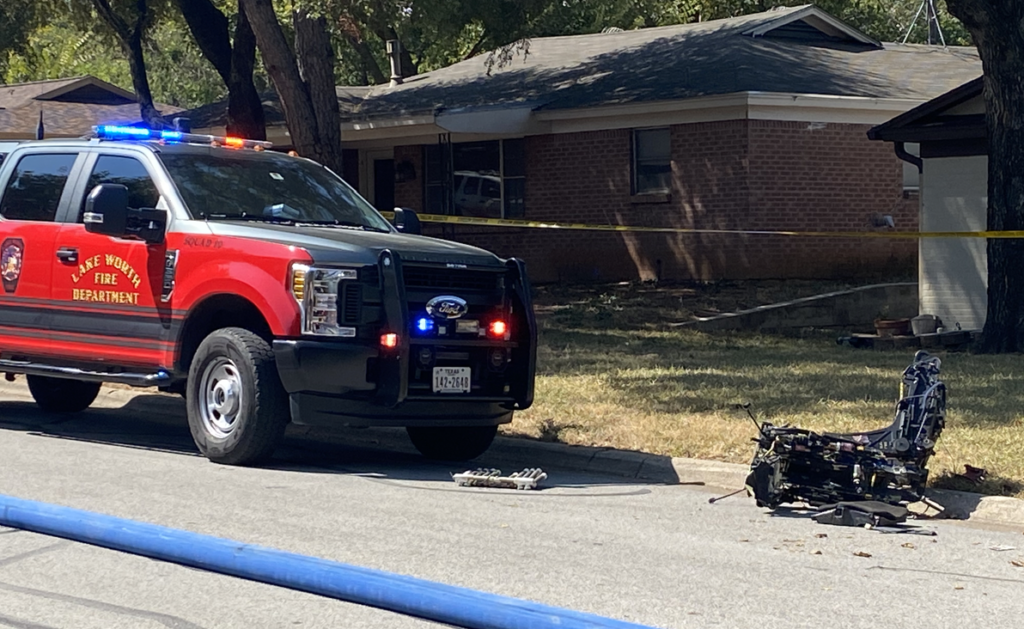 A pilot’s seat is seen outside a neighborhood after a military plane crashed in Lake Worth, Texas Sept. 19. [Credit: Anonymous]

Pilots Injured After Military Plane Crashes in Lake Worth Neighborhood

LAKE WORTH, Texas — Two Navy pilots were seriously injured after their plane crashed into a Lake Worth neighborhood on Sept. 19.

Lake Worth Police Chief JT Manoushagian said the department received a call regarding a downed plane between the 4000 blocks of Tejas Trail and Dakota Street just before 11 a.m.

The two pilots were ejected from the Navy T-45C Goshawk jet before it crashed in a backyard at approximately 10:53 a.m. Three people received minor injuries and three homes were damaged by the crash. 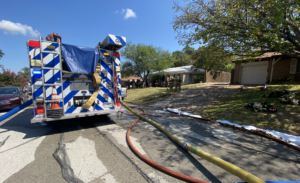 First responders on scene of the military plane crash in Lake Worth, Texas Sept. 19. [Credit: Anonymous]

The first responding officers arrived at the scene at 10:55 a.m., to find one pilot caught in power lines and electrocuted.

“With the help of off-duty firefighters who had stopped to help, the officer and firefighters were able to free the pilot and disconnect him from his parachute,” the Lake Worth Police Department (LWPD) stated in a press release.

Although badly burned, the pilot was conscious, alert and breathing, the department said.

The second pilot was located a short distance away in a wooded area with “serious, but non-life-threatening injuries.”

Both pilots were transported to a nearby hospital, Lake Worth Fire Chief Ryan Arthur said. The instructor pilot was released Sept. 21 while the student pilot is still receiving medical care. Neither of them have been identified at this time.

“This incident could have been much worse, knowing that this plane went down in a residential area here in Lake Worth,” Arthur said.

LWPD officials speculate there have been thousands, if not millions of flights over the city and that they’ve never had any mishap until Sunday, and that they’re grateful everyone is alive.

“Despite some headlines, this incident is a neighborhood miracle,” the department said. “The fact that there were no casualties is indeed a miracle.”

More homes were affected by smoke and debris after the crash. However, the Naval Facilities Engineering Systems Command (NAVFAC) said on Sept. 30 that their southeast environmental team has completed the cleanup.