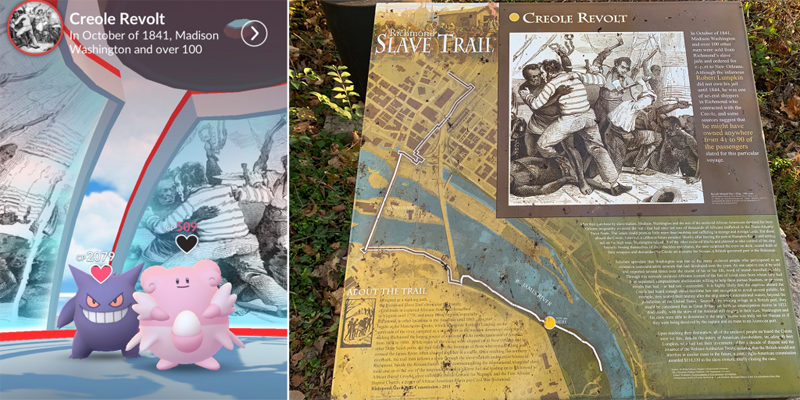 RICHMOND, Va. — Shockoe Bottom is one of Richmond’s glitziest districts, with bars on every corner and Pokémon swarming all over the place. If you play “Pokémon Go” in Shockoe, it’s impossible to ignore that the lifeblood of these bustling streets is tied to the anguish of slaves sold into bondage. It’s the former site of one of America’s busiest slave markets.

At the Slave Auction Site, an intersection marked with a historical sign, a Pokémon Gym is already full of defending Pokémon. There’s no room for my own.

The central appeal to “Pokémon Go” — besides the adorable pocket monsters themselves — is that you can play it anywhere. Open up the app in your hometown, and you’ll see interactive blue PokéStops that distribute items and towering Gyms where players can compete against each other at historic sites, public art, and monuments. The augmented reality app drapes a colorful, interactive curtain over any given city (sorry rural players), which, in Richmond, means that historic markers of slavery are transformed into tokens to tap and swipe.

I sought to experience history in this strange and digital fashion first-hand. On a warm and sunny Sunday afternoon, I walked the Richmond Slave Trail—a miles-long tour of 15 important sites in the city—with the app open to see where history and mobile tech might intersect. I ended up in Shockoe wondering if there is any way to envision the past accurately.

“Pokémon Go,” the free-to-play game developed by Google spinoff Niantic, was once a fad that’s become a mobile market mainstay. Many people in Richmond still play, and you can see their activity in-game as you roam the city. Some consider it a useful guide for exploring local history, as players in the private “Pokemon Go RVA” Facebook group told me.

“‘Pokémon Go’ has actually shown me places and areas I would not have noticed or come across if it wasn’t for the game,” said Marco Montanez, a new player.

Jenna West said that on a trip to the nearby Virginia Holocaust Museum, her step-father played the game and discovered that the building was once a war prison. “We learned the history of that from [‘Pokémon Go’],” she said, “because there isn’t a plaque or anything about it.”

The Richmond Slave Trail begins in Manchester, a former independent town south of the James River, where slave ships once docked.

I followed the signs, and was led down a single-file dirt path snaking through the woods. This, I discovered, was the path along which abducted people were forced, in chains, to follow as soon as they were hauled off the boat. It’s an eerie locale, flooded with the white noise of cars rushing across a nearby overpass and the twittering of birds and squirrels skittering in the brush.

At select locations, the Richmond Slave Trail Commission has placed informative signs with contemporaneous illustrations and personal accounts. It’s an earnest effort to place this once-arduous journey into context — but it’s also where the PokéStops are located.

The “Native Markets” sign, which directly connects the slave trade to the wealth of Richmond’s riverside commercial districts and rapid growth, is teeming with Pokémon. You can catch Ekans, Meowth, Vulpix, and Turtwig there. Further down the trail and over a footbridge is the “Creole Revolt” sign, commemorating the strategic seizure of a slave ship by the captive Madison Washington and his men in October 1841.

“Creole Revolt” is also a Gym, and it’s a red Valor one too—that’s my team in “Pokémon Go.” So I left my Gengar there to keep the lone Blissey company. 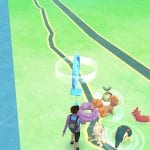 My map in Pokémon Go, with a blue PokéStop surrounded by digital critters to tap. 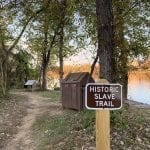 The beginning of the Richmond Slave Trail along the James River.

The game, however, uses images from the trail sign to illustrate the virtual Gym. Seeing a depiction of black men fighting for their freedom aboard a slave ship wallpapered behind cartoon animals is unsettling.

As I walked further, I was struck by how sparse the trail is in reality and in the game. The signs are infrequent, and the path is so unassuming that without any direction, I’d have no idea I was retracing the footsteps of enslaved people. I even lost the trail as I crossed Mayo’s Bridge into Shockoe, and had to consult a map to find the next stop.

What was the difference, I wondered, between following the trail in an AR game and following the trail as laid out by the Richmond Slave Trail Commission? They’re both simulations, in a sense. Unlike those who were forced into this journey, I can escape whenever I want.

I later spoke with Mary Lauderdale, visitors services manager at the Black History Museum in Richmond, who said that her own experience walking the trail with an interpreter was more powerful than going alone. Having more context brought the past to life.

“You’re going over there in your jeans and your sneakers, but that’s something they didn’t have,” said Lauderdale. “It would have been unfamiliar territory, it would have been at dusk—not with modern street lighting they have now. It would have been more difficult back then. I don’t think doing it on your own would give that emotional experience. History isn’t about facts and figures, it’s about people.”

However, she said, if someone discovers something new about their local history through an app, where they wouldn’t have paid attention to it before, that’s valuable.

That’s what a museum does, Lauderdale added: “Spark conversation, spark interest, and make you want to learn more.”