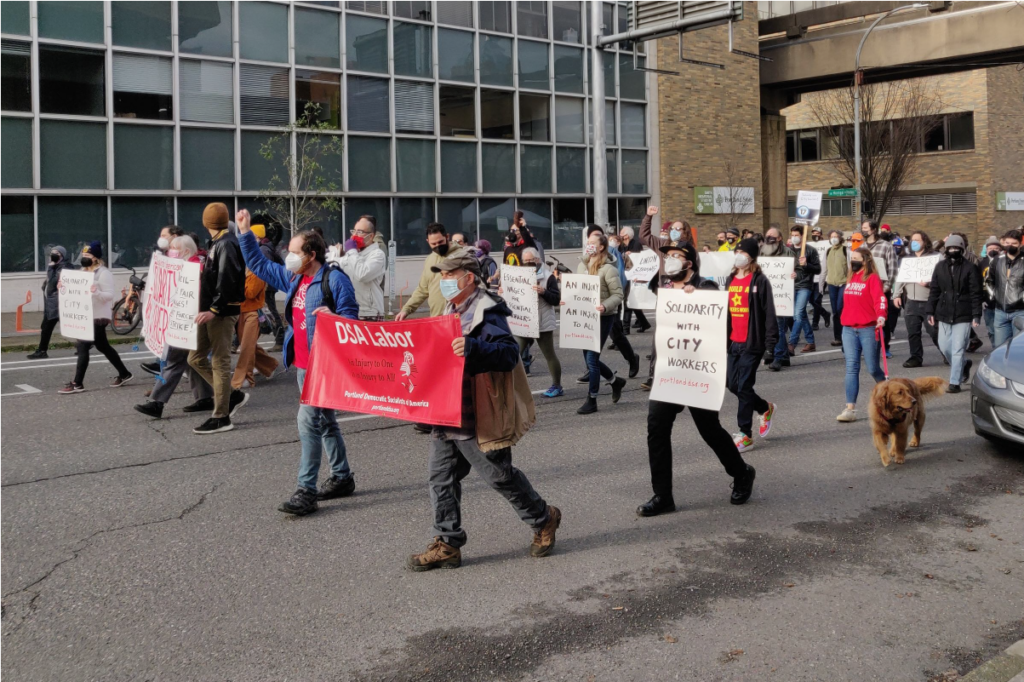 Workers march through downtown Portland, threatening to strike Thursday unless an agreement is reached with the city. [Credit: Justin Mason]

(PORTLAND, Ore.) — City of Portland workers may strike on Thursday, unless a new contract offer from the city is accepted. On Saturday, District Council of Trade Unions (DCTU) workers, along with support from members of the Portland Democratic Socialists of America (DSA) and others, gathered at City Hall. The group marched to the City of Portland Development Office, where DCTU President Rob Martineau announced that a new contract offer had been received, granting a 2% wage increase across the board. Cheers erupted from the crowd.

The city’s last-minute offer came after Martineau announced that DCTU planned to strike on Thursday at 9 a.m., unless a contract agreement was reached. The workers have sought the 2% wage increase — among other benefits — in a 19-month series of negotiations with the City of Portland. DCTU members authorized the work stoppage on January 19, with 86% voting to strike.

“Portland continues to lose our most skilled workers to the competitive market, while our newest members cannot afford to live in the city they hope to serve,” Martineau told Fox 12 Oregon.

The DCTU consists of six unions representing 1,106 machinists, plumbers, painters, engineers, electricians, and others. Negotiations have largely centered around a two percent wage increase. Oregon Public Broadcasting’s Rebecca Ellis wrote that a strike over this issue could affect a variety of city services, such as “vehicle repairs, water treatment, and building inspections.”

Prior to adding a two percent wage increase, the city was offering all DCTU members a bonus of $3,000, a five percent cost-of-living adjustment, and 1,800 hours of union time per year paid by the city, among other benefits, according to Portland spokesperson Heather Hafer. While the offer now includes the highly sought-after wage increase, DCTU demands for wage premiums have not been addressed. The offer also came without a broader tentative agreement, a move lamented by some DCTU members.

Negotiations were further complicated by allegations that city officials interfered with union procedures, including the strike authorization vote. Colin Staub of Northwest Labor Press reported that “an unfair labor practice” complaint was filed on Jan. 18. DCTU claims in the document that city supervisors, in violation of labor rights, inquired as to workers’ positions on the strike authorization and their intent to participate, even denying requests for vacation due to the looming strike.

The city’s official statement regarding the strike is: “We respect the right of union members to strike, and we will continue to work with DCTU in hopes of coming to an agreement on outstanding issues.” The city is not conducting interviews on the ongoing labor dispute at this time.

Tensions over the contract dispute remain high, with DCTU members to vote on the offer today. The lack of wage premiums and a written tentative agreement may be cause for rejection by union members. If the offer is rejected, the strike will take place on Thursday as planned, and negotiations will resume. “Labor peace depends on tentative agreements,” said Martineau.