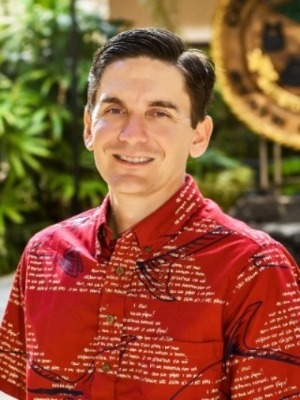 Justin Kollar isn’t a fan of the phrase “defund the police” and refers to it as “terrible marketing.” Still, he supports many of the movement’s tenets, including spending more on mental health services so that adequately trained responders can react to crisis calls—in place of armed police. Kauai receives a steady flow of Homeland Security grants, which are used to buy “all kinds of shiny and expensive equipment,” Kollar says over a Zoom call, three days after he’s newly re-elected for the third time as Kauai prosecuting attorney. Instead, he suggests, “We should spend that money where it can do some good.”

Kollar is at home in a bright sun-filled room with stark white walls. His partner, Yoohyun Jung, is a journalist at a non-profit news organization in Honolulu, and he has a 4-year-old son named Owen from a previous relationship. Kollar says that he’s been elected three times because he and his office have earned the trust of the community. “[We’re] transparent and honest with them about the work that we do. Crime rates remain low, and the Office runs well,” he says. “Voters do not clamor for change unless they get the sense that something is wrong and we have given them no such reason to look elsewhere. It’s an honor to serve this community.”

He supports legalizing marijuana, as well as prison and police reform and improving mental health services across Kauai. After a Hawaii Supreme Court Order instructed prosecuting attorneys to work to reduce COVID-19 spread in state prisons, Kollar recently released inmates from the Kauai prison to reduce overcrowding and COVID exposure, and he did it with the community’s full support. He has reduced the courts’ reliance on incarceration, decreasing the jail population by roughly 40 percent over the last eight years.

“I wanted to show that we could incarcerate fewer people and still keep our community safe,” he says, adding that violent crime isn’t connected to marijuana but rather meth and alcohol. He thinks marijuana legalization could provide the state with much-needed revenue and believes criminality is related to substance abuse, especially methamphetamines and alcohol, but that imprisoning people with substance abuse problems isn’t helpful. “It’s time to admit that the war on drugs rhetoric of the 1980s and 1990s just doesn’t work,” he says. “We gotta do something different.”

Kollar is originally from Pennsylvania and graduated from Boston University with a degree in history and political science before attending law school at Suffolk University. His Hawai’i career began in 2006 when he moved to Oahu to clerk for now-retired Judge Daniel R. Foley, who was on the Hawai’i State Intermediate Court of Appeals. Kollar says of his time working with Judge Foley, “He was a great mentor and a very smart, caring person.”

On Oct. 11, National Coming Out Day, Kollar, an active Twitter user, tweeted about being bi. When I ask if he has experienced pushback on the job due to his openness about his sexuality, he says, “I’m 47. I’m too old to care what someone thinks.”

He is most proud of his work with Fair and Just Prosecution, a progressive network of prosecutors. Executive director Mariam Krinsky wrote in an email, “Justin was a national leader in his response to the COVID-19 crisis in our jails and prisons.” She added that Kollar’s vision for justice in Hawai’i is “compassionate, fiscally responsible and focused on improving the safety and well being of his community.”

Kollar is excited about his upcoming term. “Law enforcement is not a monolith. There’s a growing movement of people who believe we can do things differently.”