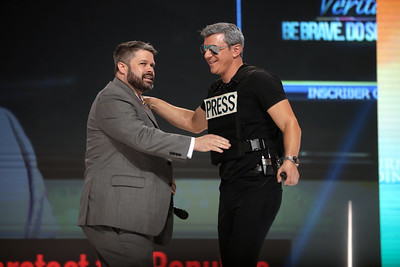 Cary Poarch and James O’Keefe speaking with attendees at the 2021 Student Action Summit hosted by Turning Point USA at the Tampa Convention Center in Tampa, Florida. [Courtesy of Gage Skidmore via Flickr]

Project Veritas and Journalism’s Gray Matter in the Digital Age

(DENVER) — Project Veritas, a nonprofit newsroom founded by controversial documentarian James O’Keefe in 2010, purports itself to be a journalistic venture aimed at exposing “corruption, dishonesty, self-dealing, waste, fraud, and other misconduct in both public and private institutions,” according to its website. But the venture’s suspicious methods of collecting information and the partisan manner in which the information is disseminated makes Project Veritas neither journalistic nor newsworthy. Instead, the organization is a symbol of how perverted the definition of “journalism” has become, adjacent to the struggles to define professional journalism in a digital information ecosystem.

Some of the work Project Veritas has done includes publishing emails from employees at Salesforce about allegedly ending the company’s relationship with the National Rifle Association following the mass shooting at Robb Elementary School in Uvalde, Texas. The outlet has also published videos purporting to show employees of Twitter admitting to being biased against Republicans and an alleged whistleblower from the Federal Bureau of Investigations about “targeting the news media” with undercover sting operations.

One of the most pernicious aspects of Project Veritas is the organization’s use of secretly recorded videos, undercover operations, and deception to conduct its “journalism”. Not only do these practices flagrantly violate the most basic tenets of journalism ethics and best practices but they also conflate reporting and political spying. The conflation of reporting and political spying is part of what fuels many right-wing dismissals of negative news about former President Donald Trump as “fake news” or a “partisan witch hunt.”

According to a report by the New York Times from November 2021, even members of the Project Veritas inner circle understand that the organization operates in a legal and ethical gray area. The report cites several internal memoranda issued by Project Veritas’ legal counsel, Benjamin Barr, concerning ways the organization’s “journalists” can conduct themselves without running afoul of the law.

“Because intent is relevant — and broadly defined — ensuring PV journalists’ intent is narrow and lawful would be paramount in any operation,” one memo states. This memo was released in response to a query about using a dating website to meet government employees with high-level security clearances, according to the report.

O’Keefe has vigorously denied any allegations of wrongdoing, even after the FBI raided the Project Veritas offices in Mamaroneck, New York in November 2021. In a YouTube video posted after the raid, O’Keefe said “[Project Veritas] never break(s) the law…In fact, one of our ethical rules is to act as if there are 12 jurors on our shoulders all the time.”

But the use of undercover reporting for politically motivated stories raises questions about what other ethical rules Project Veritas requires its journalists to follow. If Project Veritas journalists don’t have to identify themselves as such, then what is to stop them from lying about other aspects of their interactions? Take disclosures of whether a conversation is being recorded or will be edited before being published as an example. Trust is one foundational element in journalism and it is impossible to justify lying to a source to get information.

The partisan way in which Project Veritas disseminates the information it collects is also un-journalistic. For instance, Project Veritas routinely selectively edits its videos and has a long history of distorting facts and context, Andrew Seaman, who chairs the Society of Professional Journalists’ ethics committee, told the Washington Post in 2016.

The group is also notorious for attacking Republican targets like Planned Parenthood and teachers unions, which sheds light on their slant as an information generator. Many of the videos pertaining to their attacks on teachers unions relied on “fake scenarios involving Project Veritas operatives,” according to a one-page document describing the work of Project Veritas compiled by the Michigan chapter of the American Federation of Teachers, a local union.

But outside of Project Veritas’ deceptive tactics, partisan publishing, or even its financial ties to right-wing political groups, the organization poses a much bigger problem for journalism. Namely, Project Veritas’ success is a symptom of journalism’s struggles to define itself in the digital age. And if left untouched, this issue threatens to denigrate American journalism as nothing more than storytelling for political purposes.

What makes it easy to conflate Project Veritas with professional journalism is that the Project Veritas website looks very similar to professional news outlets. Articles posted on the website feature datelines and are structured similarly to what could be seen reported by reputable newsrooms like  NBC News and Insider. However, the glaring difference between Project Veritas and its professional counterparts is its separate intents and purposes.

Project Veritas has made it abundantly clear that it sees itself as an operative in the Republican political sphere. Unfortunately, Project Veritas’ mission is much more clear than the mission of professional outlets like the New York Times, CNN, and other outlets that face barrages of “fake news” claims almost daily. Clearly identifying and stating intents and purposes is of paramount importance for professional journalists if they want to remain separate from citizen journalists and “keyboard warriors” that want to use journalism to advance political agendas.