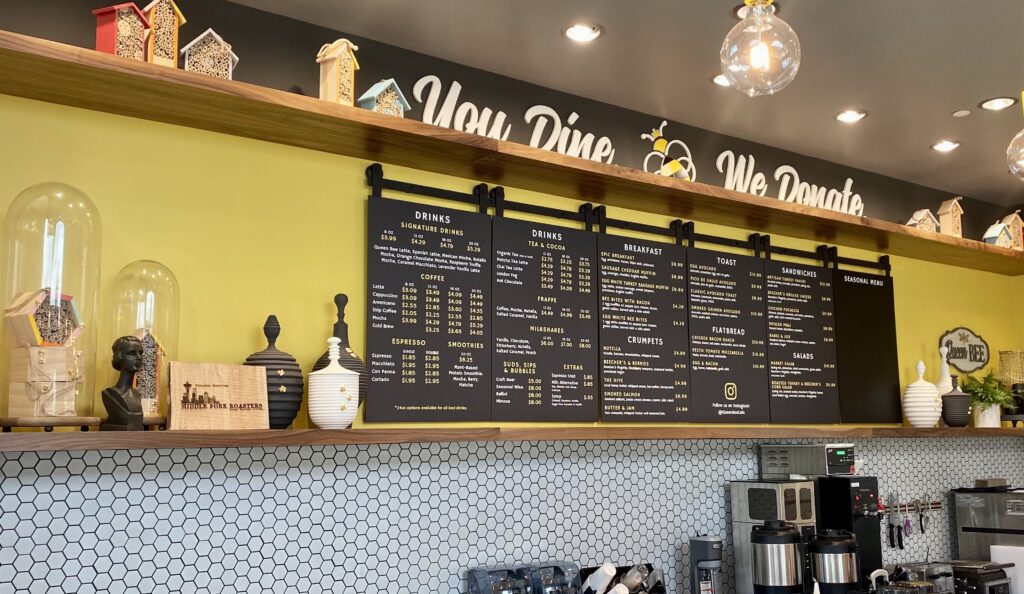 Menu board at the Queen Bee cafe in Kirkland (credit: Josie Fenske)

Queen Bee Café: Giving Back with Charity and Crumpets

KIRKLAND, Wash.  – The black and yellow umbrellas of the not-for-profit Queen Bee Café are impossible to miss along the Kirkland waterfront on Lake Washington. Upon entering the bright café, the aroma of roasted coffee beans and freshly made crumpets swirl in the air, and a message above the menu board reads: “You Dine. We Donate.” 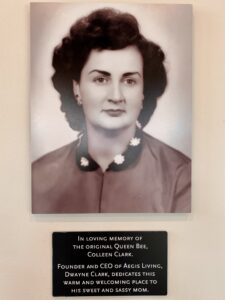 On the wall hangs a black and white photo of Colleen Clark, the owner’s mother and the original “sweet and sassy” Queen Bee for whom the café is named after.

Dwayne J. Clark, CEO of Áegis Living, a senior care home with 40 locations across California and Washington, opened Queen Bee in 2015 in Seattle’s Capitol Hill neighborhood in honor of Colleen, and has since expanded to include locations in Bellevue and Kirkland. The café donates 100% of their proceeds to a different local charity each year. For their first year, the new Kirkland location has partnered with The Boys and Girls Club of King County, according to manager Morgan Umbach.

The Capitol Hill and Kirkland locations are both attached to Aegis Living communities.

Clark attributes the success of Aegis Living to its being built upon the “great wisdom” that his mother —who immigrated to the U.S. from India at the age of 23—imparted to him: confidence, integrity, and passion.

Clark recalls a time in his childhood when his mother, faced with financial struggles and making a line cook’s wage, would steal potatoes to make soup for them. But, she reminded her son, they were only “borrowing” the potatoes, and she promised to pay them back—which she did, with interest.

“Having been raised that way, this grit, this tenacity, this you-can’t-keep-me-down spirit as an immigrant, it’s profound,” says Clark.

The organizations that Queen Bee partners with—usually focused around children—have use of the café space to hold events, explains Umbach, which is evident by the children’s play area that each café has set up. 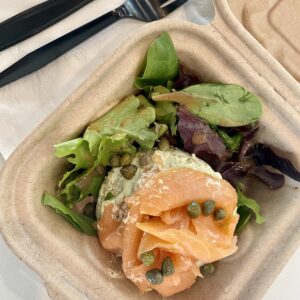 Inspired by Colleen’s love for the kitchen, Queen Bee’s menu is packed with unique creations, all made with locally sourced ingredients, such as the Cinnafle, cinnamon roll meets waffle; the Hive Crumpet, made with honey butter, bee pollen, and honeycomb; and Queen Bee Chef Justin Sledge’s newest invention, the crumpet sandwich, or “Crumpwich.”

The cookies are all named after Clark’s grandchildren, influenced by Colleen’s love for family, says Umbach.

“I’ve worked in a lot of food services before and it’s not as community driven as it is here,” says Umbach, who cites the close relationship between Aegis employees, residents, and Queen Bee baristas as lending to the feeling that “we’re all in it together.”