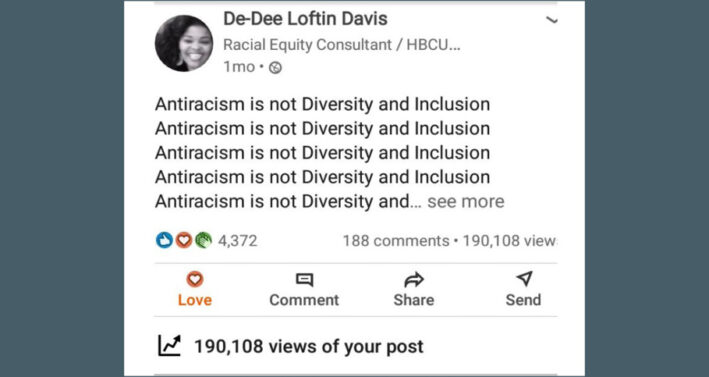 I was scrolling through my LinkedIn feed recently when a particular graphic caught my eye. It read, “Antiracism is not Diversity and Inclusion.” I clicked on the poster’s profile and became acquainted with De-Dee Loftin-Davis, a racial equity consultant in the Greater Philadelphia area. She advises senior law enforcement, education and business leaders in dismantling subtle racist practices and deficiencies in the workplace. I had been hearing people talk about performative actions since the murder of George Floyd, so her post resonated with me. I contacted Loftin-Davis to talk about her work as a racial equity coordinator. 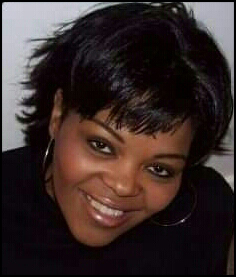 “My life’s work,” she said, “fighting racism and being antiracist, is a lifestyle. My post spoke to the difference between antiracism and diversity and inclusion.”

Loftin-Davis was referring to Black people’s decades-long fight for equality in the workplace.

In 1961, President John F. Kennedy instituted affirmative action by executive order to address inequality in the workplace. Little progress was made during the next 30 years because companies and systems never did the work to be truly inclusive, and eventually affirmative action benefited mostly white women. Companies may have hired more Black people, but that’s where the inclusion stopped. Many Blacks still weren’t promoted to positions of influence and power, a disparity reflected in the composition of C-suites today.

Sensitivity training was popular in the 1990s, leading some companies to establish entire departments, now called “Diversity, Equity, and Inclusion,” whose sole purpose is to ensure that they are hiring Black and brown folks. Still, there has been little change.

The term “antiracism” recently entered mainstream vocabulary as a response to Dr. Ibram X. Kendi’s 2019 book, “How to Be An Antiracist.” Loftin-Davis’s LinkedIn post addresses the reality of antiracism becoming a trend rather than a genuine attempt at equity and inclusivity. If that happens, the outcome of the antiracist movement will match that of its predecessive programs. While Loftin-Davis is glad that more people are aware of systemic racism, she is wary of performative actions. Antiracism is a process, something people must work on every day. Her question, “Why should we trust you now?” reflects the stance of many Blacks who have grown weary of white promises.

A few of my questions and Loftin-Davis’s answers (edited for clarity and length) are included below.

THE CLICK: How did you come to be on the racial equity path?

DE-DEE LOFTIN-DAVIS: I always say that racial equity and social justice found me, like most Black and brown people. Racial justice finds them because that’s our way of experiencing not just the U.S., but the world.

My grandfather—he was born in 1901—so I would say 1910-ish, he was in third grade. He had to leave third grade because his father had passed away and he was the oldest son of five siblings. This was before segregation, so you can imagine how his life was as a Black man in North Carolina working in the blueberry fields. Before he left school, it was nothing for him to go to school and see Black men hanging from trees that were lynched the night before. … It was so common in his era.

He never was able to fully learn how to read. He picked up things here and there; he loved to read the Bible and he loved hymnals—very spiritual man. I wanted to finish his education. So I learned everything I could from my [older] sister and my mom reading books to me, and then, on my first day at school—a little red brick building—I saw four white little boys standing at the top of the stairs.

I thought, “They must have heard how much I love school and education!” I get there and I say, “Hi, everybody!” and before I knew it, they were reaching in their pockets. They had rocks and stones in their pockets—and they were throwing them at me. Of course they landed, and it caused a cut on my forehead that started bleeding. I had a beautiful yellow and white dress on. I was looking good that day with my little black platform shoes and white socks. I was devastated. I ran home the three blocks to my grandmother, crying. When she saw me, she of course was shocked. I told her what happened. My grandmother cleaned me up and helped me to stop crying, and she said, “Okay. Stop crying; you’re going back.”

I said, “No, I am not going back to school! They don’t like me, Grandmom!”

She grabbed my hand, determined. She goes to the school and politely knocks on the door and asks for my teacher before I had even met her. She told me to wait on the stairs. She brings my teacher back to me. [The teacher is] horrified, saying “What happened?” My grandmother told her. That day, she and my teacher decided to train my class on what it meant to be Black, the only Black person coming into school, and what happened to me. That was my first racial equity lesson that my grandmother taught my entire class and me. So it kind of found me, and from that day on, I was on a mission—not only to help my Grandpapa read, but to study as much as I could on social justice in my own little elementary mind, and read books.

You choose that blue shield.
I didn’t choose to be Black;
it’s my gift.

THE CLICK: What can police departments do now to address racial bias?

LOFTIN-DAVIS: What I do specifically is when I speak to law enforcement—not just the police officers but senior leadership, and that includes D.A.s, the chief of police, lieutenants and captains—I encourage them to meet with not just me, but with Black and brown community leaders and have a serious discussion. If they’re angry, they’re angry for a reason. [The police] need to be able to handle that because of what they deal with. I let them know: Being the police is a choice. You choose that blue shield. I didn’t choose to be Black; it’s my gift. People did not choose to be brown. So just know that the lived experience is a difference. When Black people say that the “Blue Lives Matter” mantra doesn’t resonate with us, it’s because it was a choice. Black lives matter because it’s how we were born.

[I tell them to] meet with community leaders at least monthly or bimonthly. When you know your community, you know better how to address your community and keep it safe because you have that vested interest in the people. What does that look like? You need to reallocate your budget for other things that are community-focused. When new cadets come in, make sure they have the racial equity or some type of antiracism training. Make sure it’s done by someone who isn’t white or white-passing, because it’s conveyed differently. Don’t listen to answer, listen to learn. Then apply it. Practice it. Live it.

THE CLICK: As a nation, where do we go from this point?

LOFTIN-DAVIS: People always ask that, and it’s a fair question. I always say, you can’t pick up spilled milk, but you can clean it up. Start in the community. Clean up the relationships you have with Black and brown people and the community. Start there.