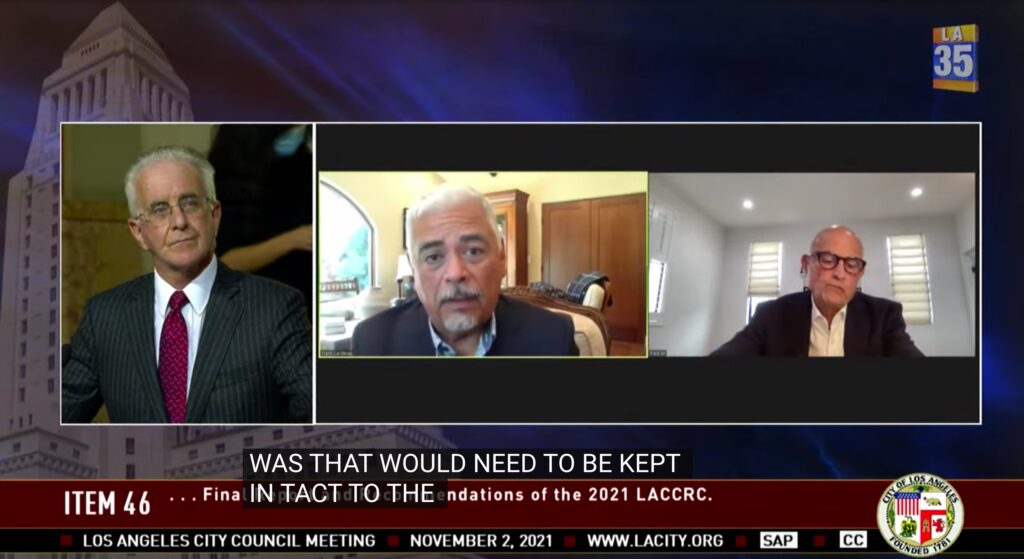 Accusations Fly at City Hall Over Redistricting in LA

(LOS ANGELES) — Accusations of secret meetings and behind-closed-door planning were fired off at the Los Angeles City Council meeting on Nov. 2. The agenda issues like the public safety report and veterinarian services for police horses paled in comparison to the always controversial topic of redistricting.

Over video conference, LA City Councilmember Paul Krekorian, District 2, accused the executive director Frank Cardenas of the Los Angeles City Council Redistricting Commission (LACCRC) of keeping “the ad hoc regional meetings out of the public eye.” He also charged that  “a decision was made in the secret meeting of the San Fernando Valley Regional group to ensure that [the] 5.7 Valley districts would be drawn” without any input from the public.

Krekorian complained that the voters of his District 2 and District 4, represented by Councilmember Nithya Raman, will have their elected officials essentially moved to a new district after only voting for them a year ago along with the 5.7 Valley districts, out of  15, drawn. The 5.7 districts make up 38% of Los Angeles. The councilmember implied that this was happening due to a lack of public input and a result of the secret meetings of the LACCRC.

“That was a decision made entirely by the whim of the Regional Committee, with no public input in a behind-doors secret meeting that had dramatic impacts on the entire rest of the city. And for the life of me, I don’t understand how that is a process of unprecedented transparency,” said Krekorian.

Cardenas countered: “The findings of each of the regional groups were then published and posted on the Commission’s website and publicly reported to the rest of the Commission in full view of the public earlier in October.”

LACCRC Chair Fred Ali also disputed Krekorian’s version of events. “[T]he initial principles that came out of those regional groups, councilmember, were informed by weeks of public testimony that that the commission engaged in,” said Ali. He also said for Krekorian  “to suggest that this was all done behind closed doors, I think, is not a fair characterization. This was done in a very transparent way in full view of the public.”

“Well, thank you, Mr. Ali,” Krekorian responded, “but I think it is a fair characterization, and I’ll tell you why. When a decision is made in secret, and then it’s revealed to the public, that doesn’t mean that the decision wasn’t made in secret.”

The Los Angeles City Charter requires that district boundaries for the city council be redrawn every 10 years after the U.S. Census to make sure each district has a balanced political representation based on equal populations. A redistricting committee is selected by the city council members to discuss the maps submitted by the public. The LACCRC submitted its final map to the LA City Council on Oct. 29 and must be completed by Dec. 31, 2021.

Although it’s common practice, redistricting has led to gerrymandering and politicization of the process. Redistricting can also lead to issues with representation. When a California state panel released preliminary maps last week, it placed Reps. Karen Bass and Maxine Waters in the same district. Reps. Bass and Waters are the only Black members of Congress from Los Angeles.