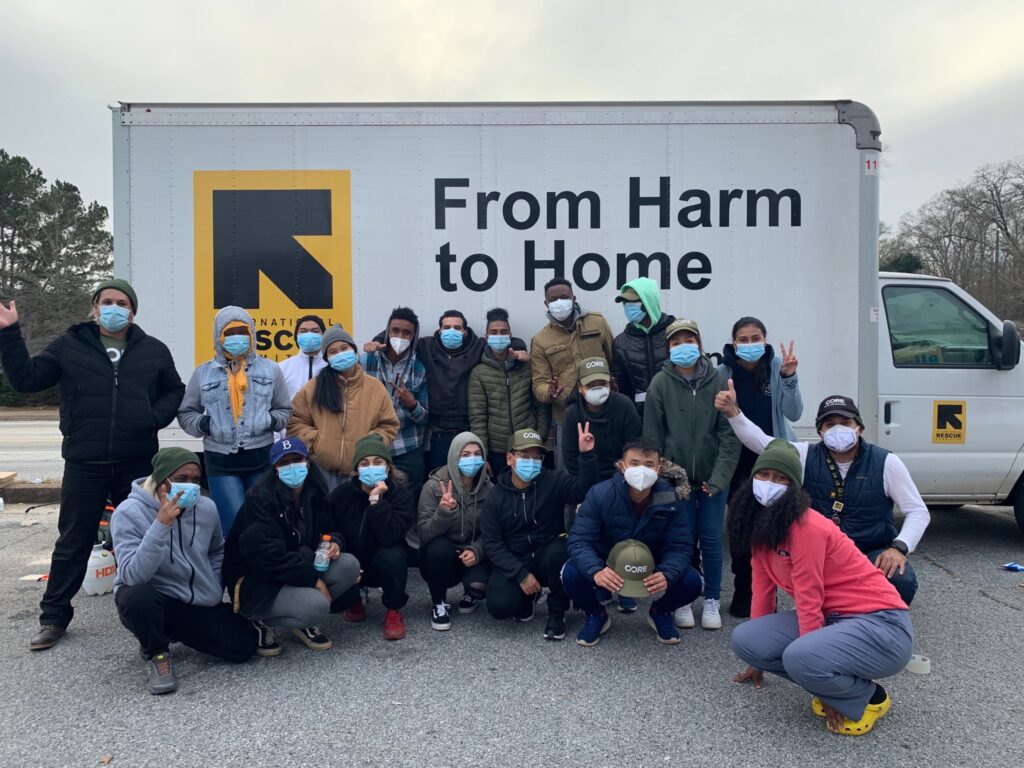 A Team of Refugees Had a Plan to Fight COVID-19 in Georgia’s Most Diverse County. It’s Working.

(ATLANTA) – It would be hard to miss the large white truck with the giant black and yellow logo shuttling around Georgia’s Dekalb County.

The man behind the wheel is Dr. Omar Aziz, program manager for the International Rescue Committee’s COVID-19 response program. A former dentist in his native Iraq, Aziz resettled in Georgia in 2013 and has been with the IRC since 2015. 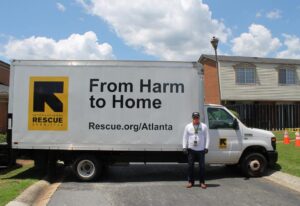 Aziz and his team have used the truck as part of a massive program that’s helped administer nearly 16,000 COVID-19 tests since May 2020, according to Fiona Freeman, IRC-Atlanta’s communications and external relations manager.

Aziz has been in charge of the program since the beginning, and he has his hand in every aspect of the operation, from recruiting new testers to planning the dates and locations for upcoming service sites.

The IRC is a nonprofit known for providing resettlement assistance to refugees. However, this program is a unique venture for the organization, in that the team is composed almost entirely of resettled refugees offering service to the greater Dekalb County community.

The program is a coordinated effort between the IRC, the Dekalb County Board of Health, and the Community Organized Relief Effort (CORE), a nonprofit relief organization founded by Academy Award-winning actor Sean Penn and humanitarian Ann Lee. While the IRC and CORE deploy the “boots on the ground” effort, the Board of Health provides essential supplies and operational support.

“Every day is a challenge. Because on my day, I have to coordinate with CORE, with IRC, with the Board of Health, the warehouse, the logistics team,” Aziz said. “With our operation, we have to put everything in one.”

Every week, Aziz’s team rotates to a new location in Dekalb, a mostly suburban county just east of downtown Atlanta. Clarkston, a small town of approximately 13,000 in the heart of Dekalb, is a frequent destination for IRC’s pandemic program .

The city is known by the unofficial moniker of “The Ellis Island of the South” due to its incredibly diverse population of immigrants and refugees. Around 53% of its population was born outside the US, according to the Census Bureau.

“One of the really unique things about Clarkston is you really can chart the course of human and world events over the last 45 years,” Ted Terry, Dekalb County commissioner and former mayor of Clarkston, told The Click. “People who had come from the conflicts, the genocides, the wars, the ethnic strife, and then more recently the climate disruptions, people from those parts of the world are represented in the population of Clarkston.”

The multicultural population of Clarkston has fostered a culture of inclusivity, Terry said.

“You have a compassionate community,” he said. “And they reinforce that culture and that energy that exists in this 1.4 square miles.”

Although Clarkston is rich in diversity, it is also one of the less economically affluent cities in Georgia, with nearly a third of the population living in poverty pre-pandemic, according to the Census Bureau. Subsequently, the city has been especially vulnerable to both the economic and public health impacts of the pandemic, according to Terry.

“The lower-wage, minimum-wage jobs are given to refugees when they first arrive,” Terry said. “I think the biggest challenge was the fact that a lot of these refugees were frontline workers. And so they just never never stopped.”

“In general, when in times of crises, asylees and refugees are one of the most vulnerable groups in society,” Ibrahim Al-Assil, a foreign policy analyst and political commentator, told The Click.

Al-Assil is also an immigrant from Syria, claiming political asylum here in the summer of 2014. He received his green card in 2019 and currently lives in Washington, DC, where he works as a senior fellow for the Middle East Institute.

Of the thousands of people who apply for asylum or refugee status in the US, Al-Assil considers himself to be one of the luckier ones, since he spoke English fluently and had a graduate degree in an employable field. Still, he is deeply familiar with the difficulties that most refugees and asylees face.

Refugees often feel hesitant to ask for assistance, especially when they come from countries where the relationship between government and citizens is fraught, Al-Assil said.

In Clarkston, some of the biggest challenges refugees deal with are at home, according to Crispin Wilondja, a school support specialist at Global Village Project, a nonprofit school for refugee girls.

Wilondja said that he saw his students become overwhelmed after the transition to digital learning in March 2020, just as pandemic lockdowns were taking effect.

Benedith, a 16-year-old GVP student who spoke to The Click, came to the United States from Congo in 2019. Because she is a minor, The Click has chosen to publish just her first name.

She said that staying focused is the biggest challenge in online learning, since she lives in a small apartment with her parents and nine siblings.

“Sometimes [I am] cooking and being in class,” Benedith said, explaining that the pandemic has forced her to take on more responsibilities to support her family.

Benedith’s situation is not at all uncommon for refugee students at GVP, since most refugee parents do not have the luxury to work from home, according to Wilondja.

“[They] are moving from children to becoming leaders of their families,” Wilondja said. “Because they learn English easily, in a very fast way, they become interpreters. They become those reading mail, bills. They become those who are now supporting families or parents when they need something.”

Aziz and his team work hard to spread awareness of their services in these communities, regularly posting the dates and locations of upcoming service sites across social media. Aziz’s truck doubles as a billboard to draw the attention of passersby, brandishing the words “From Harm To Home” in bold black letters next to the IRC’s iconic yellow logo.

The IRC’s program was designed specifically to meet the needs of what are known as “RIM”  (short for “refugee, immigrant and migrant”) communities.

The most important aspect in reaching these communities is breaking the language barrier, which the IRC achieves by leveraging its vast and diverse network of staff, volunteers, and former refugees. The IRC’s COVID-19 response team consists of 18 associates who speak 20 languages, according to Aziz. 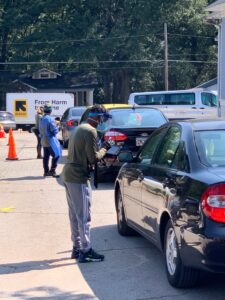 Finances and legal status are never barriers to service, as patrons need only drive through or walk up to the service site, no compensation or identification required. Moreover, IRC’s team goes the extra mile to reach those most in need, Aziz said, explaining that they regularly go “door knocking” and even bring services to the homes of the elderly or disabled. Once testing is completed, Aziz and his team work to deliver the results within 24 to 48 hours.

However, service does not end once the test results are delivered, Freeman added.

“If there’s a family who tests positive for COVID and they need to stay home, we can then add them to our food-distribution list,” she said. “So IRC has sort of ‘wraparound services’ for families that were being impacted.”

IRC in Atlanta has disbursed more than $450,000 in direct cash assistance to those impacted by the pandemic, according to a case study by the National Resource Center for Refugees, Immigrants and Migrants (NRCRIM).

Although the program was launched specifically to meet the needs of RIM communities, Aziz stresses that no one is excluded from receiving service.

“When we announce our testing sites, we don’t say it’s [only] for refugees or immigrants. Actually, it’s for everybody,” Aziz said. “I hate to say it’s for ‘our community,’ because we are now all American, all Georgian.”

The IRC has played an integral role in fighting the pandemic in Dekalb county, as their program administers around 400 COVID-19 tests weekly, compared to an average of 60 at other nearby testing locations, according to NRCRIM.

Freeman credits IRC’s success to their trusted relationship in the community and the program’s wide accessibility, an approach she believes can be a useful framework across the country.

“We’re documenting the model of testing and this response to the pandemic, because it looks like we might see other pandemics in our lifetime,” she said. “Taking the services to the people has been really, really effective.”

Just as the program approaches its one-year anniversary, the IRC reached yet another milestone. On April 6, the IRC announced across its social media platforms that they are administering COVID-19 vaccines alongside their testing services.

Now that the program has officially started administering vaccines, the IRC is working to reach as many people as possible.

“We want to close the loop that we started,” Aziz said. “We responded to the pandemic from the first month, starting with testing, doing the education material, and to reduce the stigma from the vaccine.”

Dispelling fear about the vaccine is a top priority, as misinformation is rampant throughout the country. RIM communities are no exception, Aziz said. In order to combat this, the IRC has continued to engage in local outreach by holding information sessions, partnering with community and faith leaders, and distributing informational material in multiple languages.

Despite the remaining challenges, Aziz and his team continue to be optimistic and committed to their work.

“To end this pandemic, it’s the effort of everybody. So everybody should do his part, like vaccinations, masks, social distancing,” Aziz said. “Until we reach herd immunity — then hopefully it will be back to normal.” 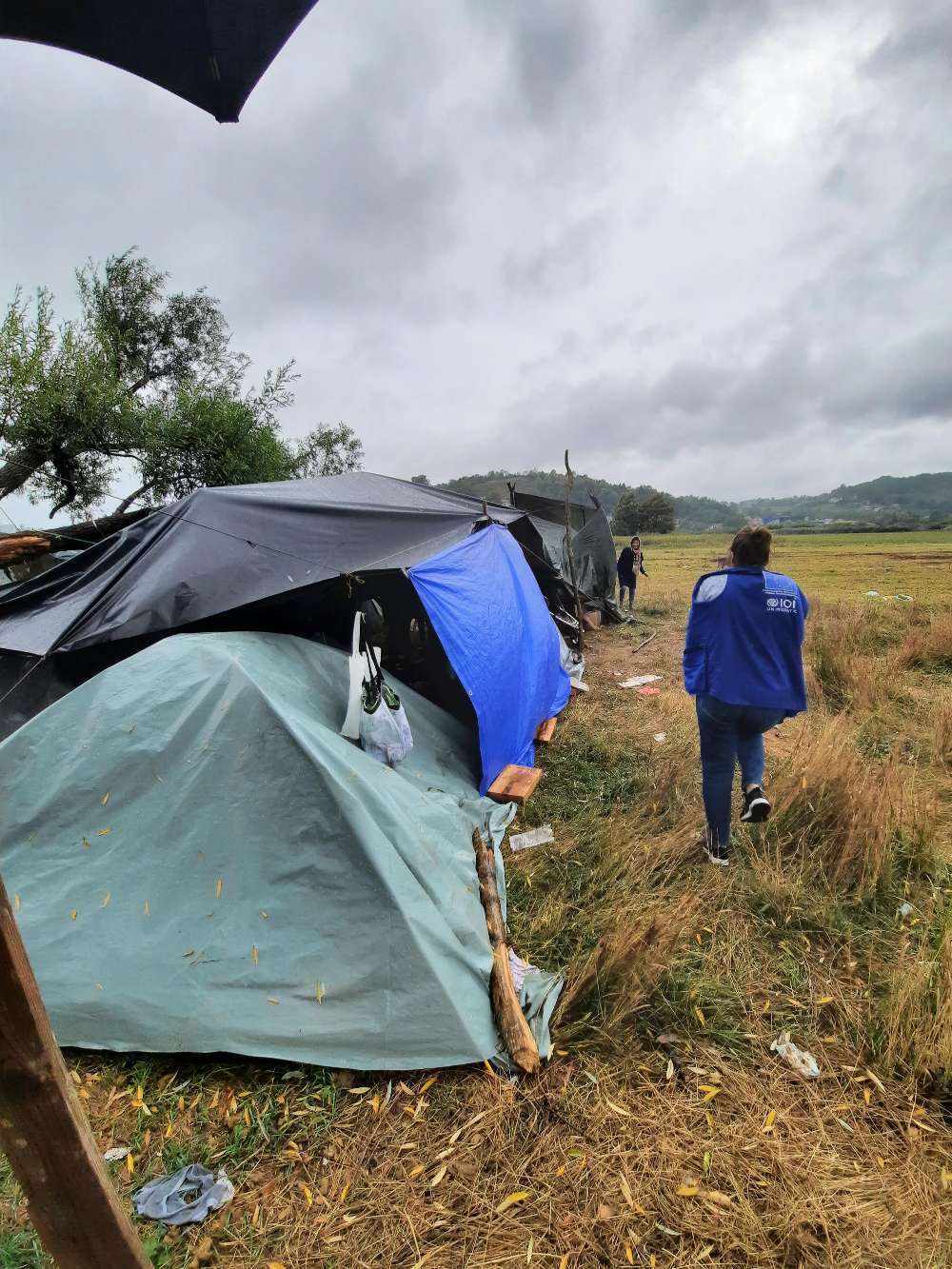 Hashmat Moslih, an independent Afghan analyst, told The Click that Bosnia already has "enough on their plate" when it comes to migrants.