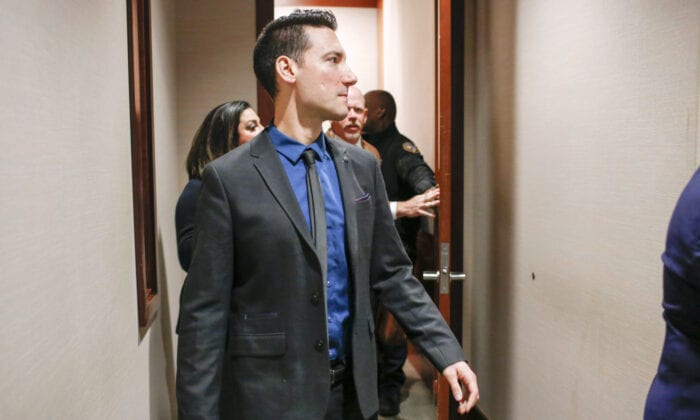 HOUSTON, TX – FEBRUARY 04: David Daleiden, a defendant in an indictment stemming from a Planned Parenthood video he helped produce, arrives for court at the Harris County Courthouse after surrendering to authorities on February 4, 2016 in Houston, Texas. Daleiden is facing an indictment on a misdemeanor count of purchasing human organs, and along with defendant Sandra Merritt, is charged with tampering with a governmental record. (Photo by Eric Kayne/Getty Images)

In some rare cases a journalist may break the law in order to tell a perfect story. And in these cases journalists ultimately suffer the consequences. That is what happened to anti- choice activist (he calls himself “pro-life”) David Daleiden, who in 2015 secretly recorded Planned Parenthood workers. Subsequently he released specific edited videos to draw attention away from viewers into believing that Planned Parenthood illegally profited from the sale of fetal tissue. This campaign was effective, and in result, was the catalyst for congressional action against a non profit that provides reproductive health care to millions of American women each year.

To carry out their subterfuge, Daleiden and his partner, Sandra Merritt, presented themselves  as representatives of a medical research company. During these phone calls they were able to get information that proves that Planned Parenthood was profiting from selling fetal tissue. Daleiden and Merritt, according to Rewire News, insisted they were acting as “citizen journalists” who went undercover to investigate alleged fetal tissue trafficking by Planned Parenthood, therefore exempting them for liability under California’s eavesdropping law.” In many states, 38 to be exact, you can record a conversation without warning the other parties. California is one of the states that forbids you from engaging in that action.

Daleiden admitted that he knew what he was doing was illegal. He believed that if he went undercover, that he would be able to find out what Planned Parenthood was doing. By doing so, he put himself in one of those positions where he needed to break the law in order to tell his story and what he found and now is expected to suffer the consequences.

In order to prevent Planned Parenthood from serving patients that heavily depend on the organization, Daleiden broke a law by going undercover and he now faces charges. Daleiden was accused of fraud, breach of contract, unlawful recording of conversation and civil conspiracy. As of November 16th 2019, Daleiden was expected to pay $870,000 in damages to Planned Parenthood.

Daleiden claimed in an interview with TK that he learned that Texas Planned Parenthood Gulf Coast planned to “move forward” with a deal he pitched to them as an undercover investigator to sell aborted baby livers at $750 dollars each. “The national office,” he added, “has chosen to have a don’t ask don’t tell policy.”  He reasoned that since the public was unaware of this, he had a legal right to disseminate the information, even if he lied in the process of getting it. what was going on with Planned Parenthood as most of the public was unaware of the issues.

Prosecutors did not buy his argument, asserting that he didn’t qualify for Shield Law protections since he wasn’t a journalist. Even if he were a journalist at the time of the recordings, his action “would not be protected by the California Shield Law or the Federal Privacy Protection Act under the circumstances alleged in the search warrant,’” the judge said in a ruling.

Daleiden and Merrits confession stirred a lot of commotion in his testimony rounds. According to Rewire, “Merritt testified that security had not stopped her as she walked through the abortion-provider conference, filming undercover, and up to her hotel room without her name badge. She said another undercover anti-choice activist had picked up Merritt’s badge from a nearby table and given it to her, and Merritt had put it in her purse.

Through this, it helped the argument by that the defendant was not liable for the recordings because those meetings were held in public. Merrit lied under oath and it destroyed their case.
“While the defendants claim they went undercover to expose violent crime, Planned Parenthood says they intended to smear and shut down the reproductive health-care provider, long a target of anti-choice lawmakers and activists” Christophi says.

From a journalistic standpoint, Daleiden may have gone undercover because he believed there was no other way to get the story. Despite that, what he ended up doing was an invasion of privacy no matter his intention. What was gained through his investigative style however was the new knowledge the public has about how much money planned parenthood is actually making based off of the phone call that he secretly taped.

The private conversation that was secretly recorded has been publicly shared and was also played in court for the jury and everyone else to hear. This is why it is important to differentiate journalists from citizen journalists because he is doing something illegal that he feels he could get away with if he was a journalist.

In my opinion, I think that what he did was right even though it has resulted in the break of the law and charges are now being filed against him. I am not sure if I would have secretly taped a conversation but if I needed to get the story and that was the only way that I know how, I would risk it for the story in order to expose what is not being exposed. Journalist, reporter, citizen journalist or not, the public has a right to know the story and if you are the one behind it trying to put the pieces of the puzzle together, go ahead and do what you feel that you have to  do instinctively. Just try not to get caught!

This is an outlawed practice! Both David and Sandra who were members of the pro life group posted the conversation video where they were discussing fetal tissue sales and how much money Planned Parenthood is actually making. Daleiden says that, “he wants to defend his first amendment rights in exposing the abortion industry.” In my opinion I also agree that he should have the chance to defend his first amendment rights in reference to this point. It is free speech and free reporting however it is unethical to have been undercover and done this in secret in trying to pretend that you are a representative for a fictional company in order to find out information you would not otherwise know.