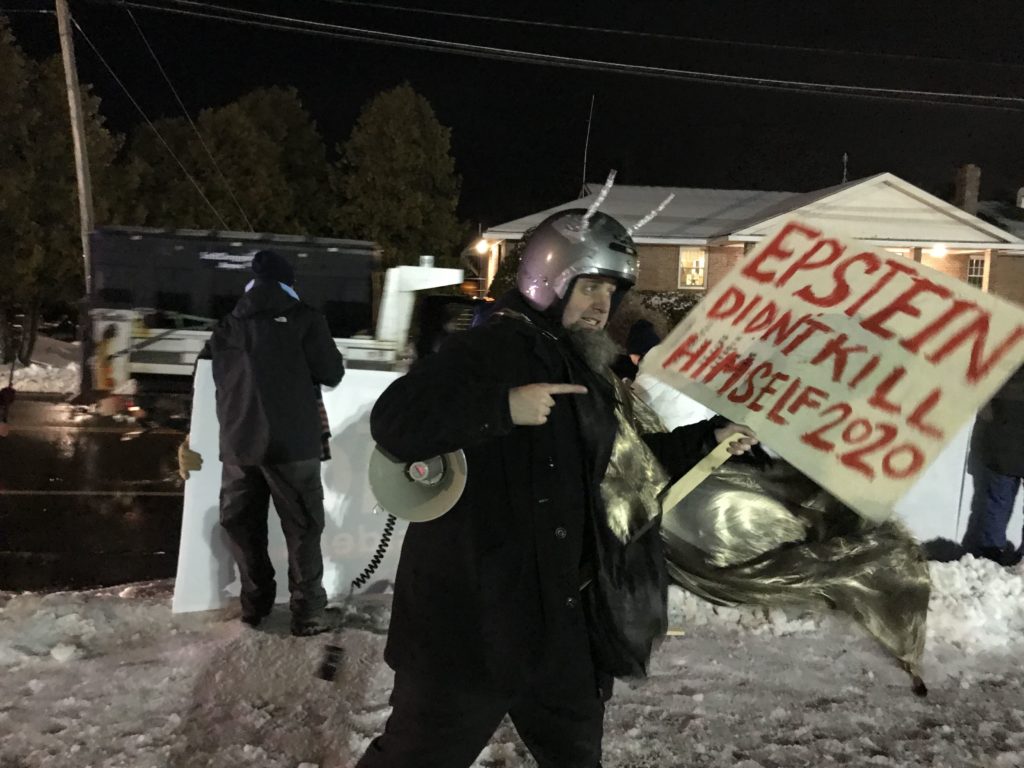 Rod Webber the man who attempted to run as a presidential candidate in New Hampshire under the name “Epsteindidntkillhimself”. Source: Michael Haley

Among the Elizabeth Warren, Andrew Yang, and Bernie Sanders supporters is Rod Webber, dressed in a spaceman helmet and cape, holding a red ink sign reading “EPSTEIN DIDN’T KILL HIMSELF 2020”, the name he attempted to register under as a candidate in New Hampshire last November.

“I’m here for the lolz,” Webber says as he prepares to tape two iPhones together, face apart, in order to capture himself and the Democratic supporters explaining why they chose their favorite candidate for his YouTube channel and Twitter.  “I get a different reaction wearing this spaceman helmet and cape than what you or other journalists are wearing.”

Webber is one among many live-action political trolls in President Donald Trump’s America. He even has a lawsuit against Trump’s campaign dating back to an alleged assault at a rally in 2015.

Webber has undertaken a special brand of political discourse that questions authority while ruffling feathers on both sides of the political spectrum. Meme master Carpe Donktum has infuriated the left with his pro-Trump content, while other trolls have disrupted the Republican Party by registering domain names under “.gop” which the party uses to create websites. With no party safe from confrontation, Webber’s stunts challenge both Democrats and Republicans with public performance and absurdity.

Under New Hampshire law, presidential candidates are allowed to run under one-word nicknames. Webber’s name alludes to the conspiracy surrounding the death of politically-connected businessman and convicted sex offender Jeffrey Epstein: “Epsteindidntkillhimself’ is one word. Yet, the law also states, “No candidate may designate a nickname that implies that the candidate is some other person, that constitutes a slogan or otherwise associates the candidate with a cause or issue, that has an offensive or profane meaning.”

Webber paid the $1,000 filing fee it takes to register as a candidate in cash, with $400 of it made up in two-dollar bills. New Hampshire Secretary of State Bill Gardner didn’t take kindly to the stunt, forcing him to leave.

A fellow political fringe candidate and satirist, Vermin Supreme, was also outside Saint Anselms and has attempted similar stunts to Webber while trying to run as a candidate in numerous elections since 2004. Sporting a rubber boot on his head, Supreme spoke to various Democratic supporters outside the debate. 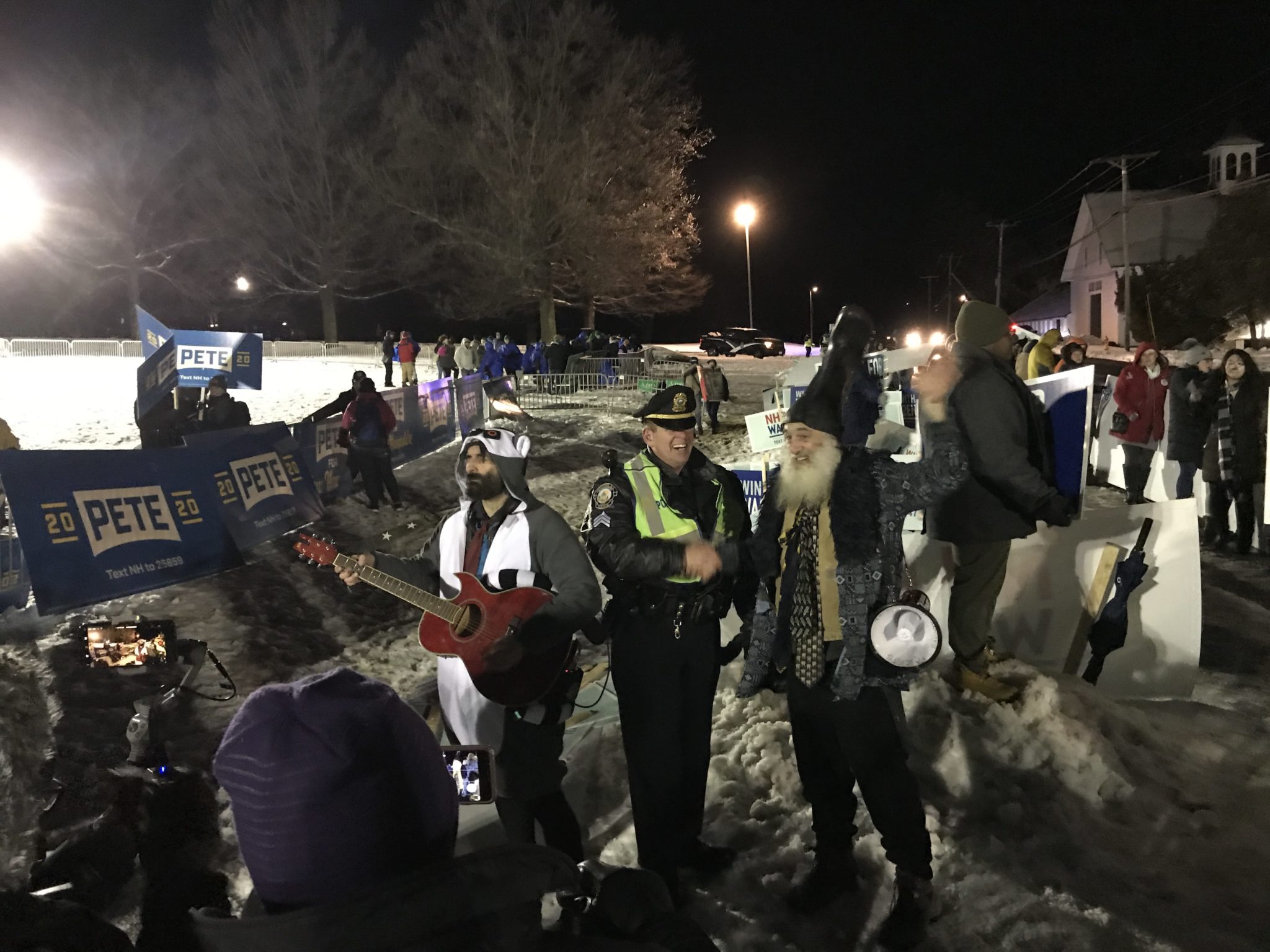 “I’m certainly good friends with the Vermin crew and will participate in their shenanigans,” Webber says of Supreme, who also filmed his cast of characters such as Rob Potylo, wearing a racoon costume playing an acoustic guitar, and Lord Buckethead, a UK based satirical candidate, all raising political issues comically. “Think of it as Crosby, Stills, Nash, & Young, where I’m Neil Young so maybe I’ll come sing with them sometimes but not all the time,” he said of his relation to Vermin and his company. “Man, I sound like a boomer. Younger people aren’t going to get that reference.”

Webber’s videos aren’t always satirical in nature. Many times he documents confrontation, which may come across as comedic but, he claims, holds a larger meaning underneath the absurdity. “I want to raise consciousness and get people to realize that it’s not all as it seems,” and wants the public to ‘wake up and realize a duopoly has a strong hold on our government.’”

In one of his recent videos, he confronts Democratic candidate Pete Buttigieg. “When are you going to address the Venusian host housing crisis? They’re using the Shadow App in order to get the homeless people off the street, is there something you can do about that Mayor Pete?” he asks before security officers attempt to stop him, in reference to Venusian aliens on Venus.

Initially, the issue of Buttigieg clearing out homeless camps wasn’t on Webber’s radar until a friend in Indiana mentioned it to him, resulting in the confrontation. On Twitter he writes of the incident, “Mayor @PeteButtigieg wants us to have a sense of humor— But won’t address the Venusian homeless camps being removed with the #Shadowapp,” alluding to his ties to the Shadow App and its malfunction during the Iowa Caucus.

Another one of Webber’s recent videos titled, “Pete Buttigieg re rigged election” depicts Webber in his spaceman helmet confronting the 2020 Democratic Presidential candidate asking, “Since the Venusians rigged the election you think it will sway to the Martians?” to Buttigieg which he replies, “Yeah, probably,” before moving on from him.

On the surface, Webber may seem incoherent. He says, however, he buries symbolism in his trolling. The “Venusians” and “Martians” represent, he argues, the Democrats and Republicans.

“My work is to break through the smokescreen, and present a looking hole into a reality that I don’t think anyone is seeing,” Webber says. “At first glance, someone may merely see foolishness or comedy,” explaining there’s more to his craft than the satirical nature. “Sometimes it takes tomfoolery, comedy, and a spoonful of medicine to get that message.”

Is all trolling, in a political sense, multidimensional? “This person could just be using their platform as their playground because they think it’s fun which would be one dimensional, or a coordinated action,” says Joshua Tucker, Faculty Director of The Center for Social Media and Politics.  “Are the person’s actions coordinated or individualized and are they aimed with a political outcome or not?”

Tucker explained trolling in a two by two model, driven by a public and private persona. “The big question is to what extent is this explicitly a political action in context of the New Hampshire primaries,” he said. “Or is their goal for attention?” 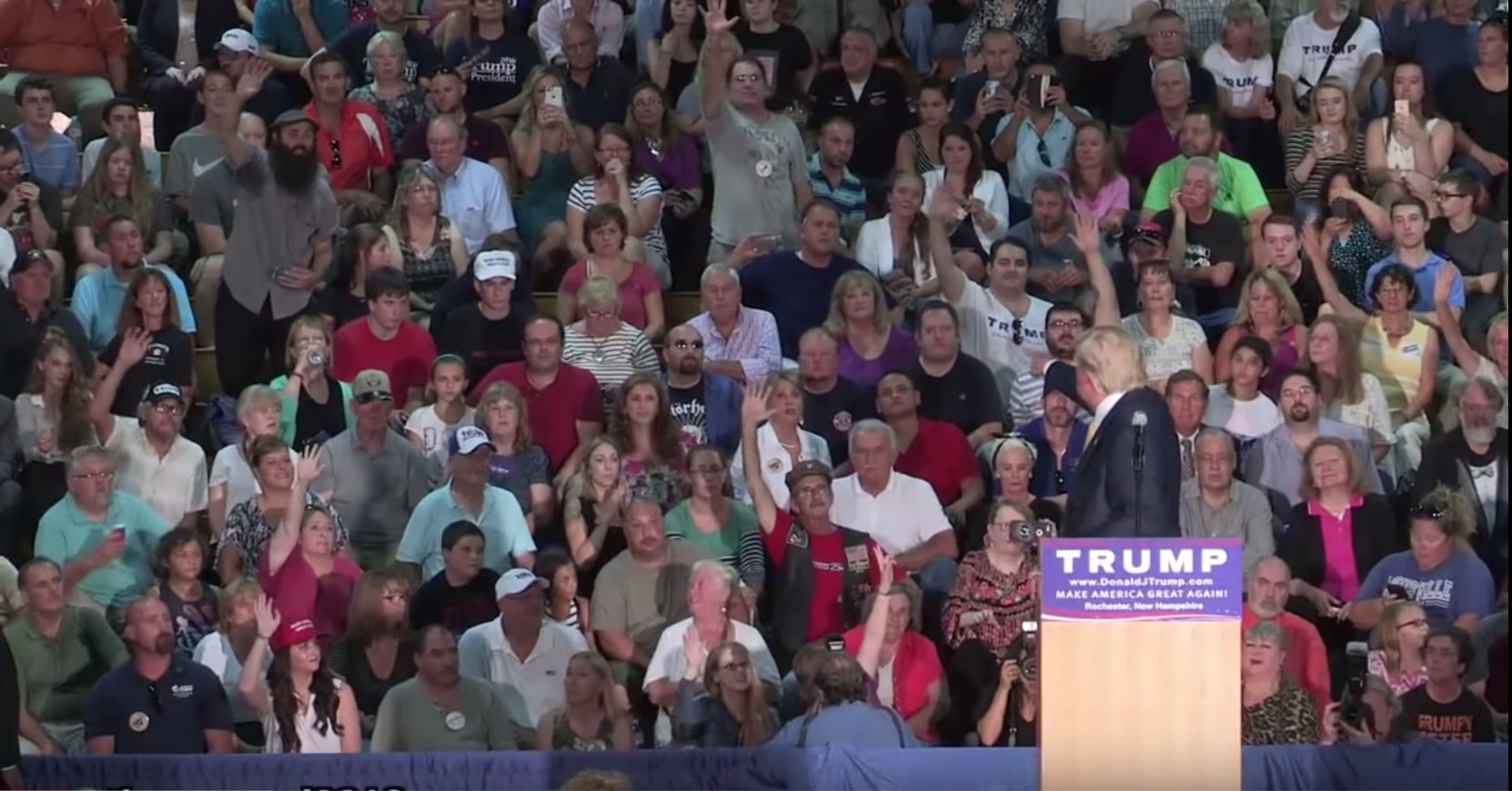 Not all of Webber’s work is laughable nor does he get off from security easily. At a Trump rally in Rochester, NH back in 2015, Webber was roughed up by supporters and security after reciting biblical verses from Verse Timothy 3 #1-7, about the election of bishops.

Webber begins reciting the verse: “It is noble to seek the office of overseer, however he who does should be above reproach, sober minded, not quarrelsome, only married once, and not a great lover of money.”

Trump responded, “Oh boy, am I in trouble?” before boos spread among the crowd.

Webber was then able to give Trump’s security flowers before being confronted.

“Trump called on me, since he was spitballing with the audience and his people didn’t like it,” Webber recalls, “and this was before people were getting beat up at Trump rallies.” After leaving the bleachers where Webber spoke the verse, he was beaten up by Trump supporters. They kicked him in the kidney area multiple times.

Afterwards, Webber filed a federal lawsuit for assault and battery against Trump, which is still ongoing, he says. “A lot of the security there [rally’s] are not police officers, they’re off duty security officers,” Webber says. “They’re ‘Paul Blart’ mall cops,” or rent-a-cop security officers used privately for events.

Webber himself has had many politically charged run-ins with the law. The FBI raided his friend’s house in Elyria, OH during the Republican National Convention, thinking he threw objects during a protest. He was arrested during a counter-protest at a straight pride parade in Boston. He says he was kidnapped by a private security force at the Standing Rock reservation, the site where protestors stood to prevent the Dakota Access Pipeline from being constructed.

In the end, Webber does consider himself a filmmaker. “It stems from being an artist,” he explains. Before he became involved with politics, Webber was involved with other forms of art in playing music and acting in improvisational movies, including Northern Comfort (2010) co-starring Webber alongside Greta Gerwig, playing a hitchhiking man traveling to Canada. “Let’s say that the last time we spoke not it was not pleasant…but I hope she continues to do good work.” Webber says of Gerwig. “I went in a different political direction, in certain ways slightly darker and controversial.”

A pinned tweet on Webber’s Twitter page reads “You’re probably in a cult. To find out, check and see if you are part of a political party. 😉,” poking fun at the political polarization of our era. “People are in power at the moment,” Webber says. “We need to speak through power, so we as humans can work to make the world a better place.”